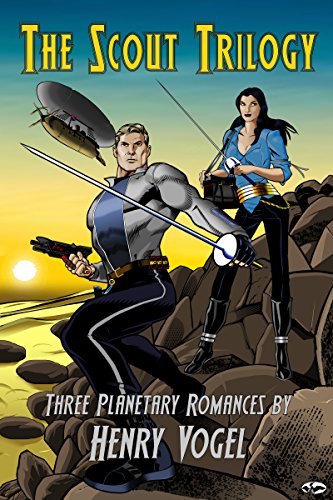 Of planetary romance and high adventure, where action moves at the speed of light and danger lurks around every corner!

Return to the future…
of The Scout Trilogy!

Here, for the first time in one volume,* are the adventures of David Rice, Terran Scout First Class, who crash-landed on the lost world of Aashla, rescued and befriended Princess Callan, heir to the throne of Mordan, and found himself thrown from the space age to the steam age in the blink of an eye.

Now, marooned without hope of rescue on a world of primitive airships, treacherous pirates, bloodthirsty monsters, and royal court intrigues, David struggles to learn the ways of his adopted home-world, at the same time as he struggles with his growing feelings for Callan and his iron determination to change just one thing: Aashla will not remain lost!

Told in a relentlessly fast-paced style, The Scout Trilogy is an exciting modern homage to the classic tales of planetary romance made famous by writers such as Edgar Rice Burroughs and Leigh Brackett. If you like your heroes unabashedly heroic, your heroines feisty and true, and your plots filled with dangers, twists, and turns, you’ll love The Scout Trilogy.

* Previously released as Scout’s Honor, Scout’s Duty, and Scout’s Oath. If you haven’t already read all three, here’s a great chance to pick up the complete trilogy at a special price.