Fiction: “Without a Leg to Stand On,”
by Ed Wyrd 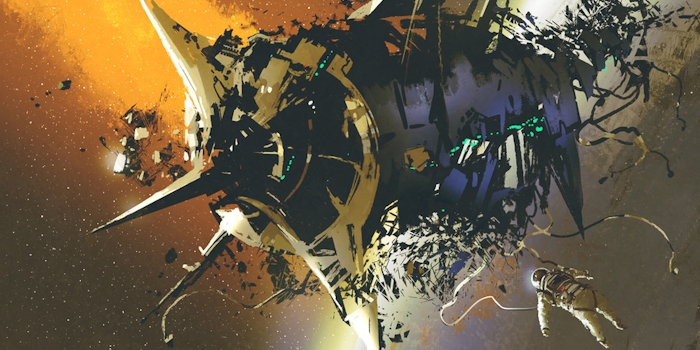 Alan was a veteran of the Theta-Eridani wars of aught six. Many thought Earth should never have gotten involved in an interstellar border dispute, that it was none of our business. “No blood for tralphium!” was one of many anti-war chants.

Turns out, the protests took longer to coordinate than the war itself. It was a quick war, lasting barely a month, yet not without its casualties, Alan among them. Some days he was whole and able to live a normal life. Other times, however, he didn’t have a leg to stand on. That’s because he had lost his left leg and now his first-gen holo-prosthesis was malfunctioning.

The Veteran’s Administration hospital surgeons had implanted a holographic-ultrasound projector into his missing leg. State-of-the-art at the time, the HUP created a solid prosthetic leg from light and sound. Unfortunately, it was on the fritz and they couldn’t figure out why.

He had had several appointments at the V.A. hospital and surgeons looked at it; IT professionals looked at it; even the manufacturer’s tech rep looked at it. Not one of them could find the problem or come up with a solution.

And not one of them was willing to install a new one. Not without Federal authorization. And that wasn’t going to happen any time soon since Congress was in gridlock over the current budget. And last year’s budget. And the budget prior to that.

So Alan was stuck with a faulty HUP. It affected his personal life with often embarrassing and humiliating results.

Alan had lost count of the number of times he had been on a date when without warning there would be a static “snitz!” and the next moment Alan was wind-milling his arms in a desperate but futile attempt to maintain his balance, before he’d end up flat on his ass on the floor with his date screaming in horror, pointing at his now-missing left leg. He couldn’t blame them. He could empathize. The sudden disappearance of a limb could be disconcerting.

He hoped tonight would be different. This time he was upfront and honest with his date.

“I lost my leg when a fusion mine went off. I was the lucky one. I just lost my leg. Everyone else in the unit was killed.”

“Oh, that’s horrible,” she said with genuine sympathy and concern.

He tapped his left leg. “But you’d hardly ever know it thanks to the OrthoHoloMed Mark I.”

She reached over and squeezed his leg. “Oh, it feels so… real.”

“Yes, except for the glitch. When I least expect it, it’ll shut down. They can’t figure out why yet.”

She nodded. “When was the last time you were on a date, Alan?”

“Over a year, Sue. They never end well. The leg would fail, I’d fall, and they’d run. And I’d…” He turned his head away, unable to finish his sentence.

She placed a gentle hand on his shoulder. “I’m sorry, Alan. I promise I won’t run. It’s been a long time since I’ve been out on a date, too. Maybe we’ll both get lucky this time.” She gave his real leg a squeeze.

He raised an eyebrow and she winked.

She gave him a brilliant smile. “I won’t. Just lean on me when it happens.”

It occurred to him that maybe he should have tried the truth a long time ago.

It was a fast tempo song and they were both awful dancers without any natural rhythm. They knew it, and yet it didn’t change the fact that they were deeply attracted to each other. They laughed at their own awkward attempts to imitate the younger dancers’ moves.

When a slow dance came on, they held hands at first, looking into each other’s eyes and saw something reflected there that neither had seen in a long while. After a few moments, their bodies were pressed together. Lips met. Tongues danced. Hands groped and stroked.

Alan cupped her breast and gently squeezed in time to the music when he was astonished to find he was squeezing nothing. Nothing, but air. Her right breast had disappeared.

Startled, he met Sue’s gaze. With a sheepish smile, she said, “Did I forget to mention my OrthoHoloMed Mark I breast?”

Ed Wyrd is currently sequestered in his midwestern Cape Cod, working on short stories and a novel when his attention deficit, wife, two boys, two dogs, and three cats, allow him to. When he isn‘t writing, reading, jogging or spending time with his family, he listens to music on vinyl and peruses his Silver Age collection of comics.