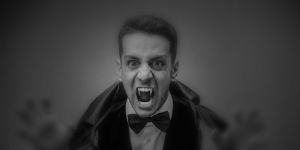 I answered the door myself, as I always did when the shelter had visitors after dark. The gaunt man on the doorstep swept aside his cloak with one hand.

More than his emaciated physique, the power of his stare gave him away. I sighed. This happened less and less as word spread, but there were still some stubborn types in the nosferatu community. They’d come out of the coffin, but hadn’t adopted the Internet.

“I’m Doctor Maria Van Helsing,” I said. “And you are not welcome here.”

I didn’t want to look at his eyes, so I focused on his nose, which I decided was overlarge. Undeath might give him pale, unblemished skin, but it couldn’t make me take him seriously with a nose like that.

I didn’t actually want to face an angry bloodsucker alone, so I was glad to see Margaret appear in the hall behind me, tying up her terry-cloth robe. It was Margaret’s devotion to her Catholic faith, as much as her nurse’s experience, that had given us the idea we needed to keep our charges safe. Our latest ward was difficult. Lucy volunteered little in group sessions, and I feared she was still deeply under the nosferatu’s influence.

Speaking of difficulty, I heard movement on the stairs behind me. Lucy. “Is it Nikolai?” she asked.

Margaret started up the stairs to block Lucy’s way while I dealt with Nikolai.

“Let me in. I demand it,” Nikolai said. I flipped the porch light on, purely to see how the halogen floodlights pained him. He covered his eyes with his cloak and stood without flinching.

“He came for me just like he said he would,” Lucy said.

Margaret frowned. “He got hungry, more like,” she said, and made the sign of the cross. “Remember what we talked about in group. He’s only interested in you for what’s inside.”

Meanwhile, Nikolai glared at me. I remembered eyes like those staring at me with the same impossible devotion. But Nikolai was looking past me at Lucy, who was struggling with Margaret.

My friends had had to tie me down.

Nikolai’s eyes darted now from Lucy, to me, to the threshold in front of him.

“I require an invitation,” he said, biting back each word as if it was torn from him.

Lucy leapt on the idea. “Oh, Nikolai, come in, come in,” she said. Now we’d see, I thought. My heartbeat quickened. Nikolai folded a cloaked arm in front of him like a shield, stepped over the threshold… and banged that prominent nose of his hard against an invisible wall.

He bounced backwards with a ladylike wail, blood dripping lazily from his face. Vampires did not, as a rule, have the best circulation. I was pleased to see that the effect was even stronger than I’d hoped. My research was already paying dividends. “This is my home,” I said. “No one can invite you in but me.”

He wiped his face on his cloak. The nose was already starting to heal, returning his features to their near-perfection. I’d hoped to show Lucy what he was really like, the ugliness I knew he hid inside, but it didn’t look like that was going to happen. I grabbed the doorknob, preparing to slam it in his face. But he had something else in mind.

“Lucy, my love,” he called. “Lucy, dearest, come to me now.” We all three of us ladies stopped when he spoke. There was something to his speech that I couldn’t explain. Perhaps the audio analyzer I’d installed above the door would be able to make something of it later. In the meantime, my mouth felt like it was full of cotton and I could hardly move.

The hardest part of opening the shelter had been admitting to myself that there were things about the nosferatu that science couldn’t explain. But I was a practical woman. If there was magic to them, there were rules as well.

I touched the crucifix I always wore, and my tongue loosened, my mind cleared. “Lucy, when you came to us, you were half-drained. We had to keep you on an IV for days, honey. You almost died. If he could control himself, he would have done so already.”

“Dear one,” Nikolai said, “I never wanted to hurt you. I can resist my hunger if it means we can be together. Don’t you want us to be together, Lucy?”

I could hear Lucy slapping away Margaret’s hands. “I’m coming, Nikolai!” she called. But Margaret planted herself in Lucy’s way.

I started to speak, stopped myself, took a deep breath, and started again. “No. Lucy may do as she likes.”

I nodded to Margaret and she stepped aside. Lucy flowed down the stairs in her nightgown. She raced out the door and Nikolai took her in his arms.

I remembered what that was like. Those strong arms. That perfect face, pressed against mine.

He lifted her off her feet and they kissed. Then he set her down, and, with his eyes on me, he turned her head to expose her neck, extending his fangs as he bent down…and stopped.

He sniffed, and wrinkled his nose. “What is this?”

No microscope could find a difference between the saline we used and that of a hospital. It had been a hard lesson, and I’d been glad, in the end, that Margaret’s faith was stronger than my own, though it must be said that hers had not been tested as mine had; she had not been spurned by a perfect lover.

But it was Margaret’s idea to have Father Cartwright bless our IVs.

Nikolai shrieked and pushed Lucy away. She stumbled back toward me and it was all I could do to catch her before she fell.

You can’t have everything, I thought, as I wrapped my arms around Lucy. If the vamp had been so headstrong as to go ahead and bite her on my doorstep, Lucy might have had the chance to see his perfect skin peel back, his shrieks turn to howls, his eyes’ welcoming depths casting her out as they took on the blankness of pain and fury.

I watched Nikolai’s face. Lucy, too, was watching, an imploring look in her eyes.

He hissed at us, his jaw distended like a snake’s. I looked at Lucy. She covered her face and shrank into my arms. Then Nikolai was gone.

I guided Lucy back inside. She’d have time now to heal properly. She might still go looking for him, when the saintliness left her blood.

But I knew that by then, Nikolai would already have moved on.

Aaron DaMommio is a husband, father, writer, juggler, and expert washer of dishes who lives in Austin, Texas. He is currently obsessed with Dorothy Dunnett’s House of Niccolo series. You can find him on the web at aarondamommio.blogspot.com.