Fiction: “We Do Not Speak of the Not Speaking”
by David Steffen

When Cassie stepped out of the general store, she saw a horseman galloping into town like he had the devil on his heels. “Now who do you suppose that is?” she asked.

Jake stopped his rocking chair, but said nothing.

“His business must be something mighty vital, to be carrying on like that.”

The young man sawed at the reins and pulled his horse to a halt in front of the store. His horse panted fiercely from the exertion of the run. “Someone’s coming! Someone’s coming!”

The young man didn’t seem to notice the question, staring intently back the way he’d come.

“I’m Cassie,” she offered. She’d seen him around, but had somehow never heard his name. The young man looked at her with an odd look to his eye, but still said nothing. “Wait a minute, it isn’t He Who Must Not Be Named, is it?” She’d heard all kinds of queer stories from her sister, who’d married into this dusty, odd little town. Cassie was only here for a few days to visit.

“She’s a foreigner,” Jake said, as if it were an explanation.

“I’m not a foreigner. I live half a day’s ride from here with my pa. I’ve lived there my whole life. Ain’t exactly a different country.”

“Foreigner,” Jake said. “No insult meant by that, mind you. It’s just the way of things, round here. If you live in the town or a nearby farm, you’re a townie. Else, you’re a foreigner. Ain’t nothing more simple.”

“What does my being from out of town have to do with it?”

“Well,” Jake said, spitting a wad of tobacco on the stained porch, “if you weren’t a foreigner, you’d know who He Who Must Not Be Named is.”

“I do know! He was some evil wizard gunshooter who came to this town ages ago. Tore up half the town with exploding bullets before the Matron shot him in the head. My sister says he comes back every couple years, with glazed eyes and the scabbed bullet hole between his eyes, until the Matron sends him away again.”

Jake shook his head. “You’re thinking of He Whose Name Must Not Be Uttered.”

“No, you said He Who Must Not Be Named.”

Cassie threw up her arms in frustration. “Well, what’s the difference?”

“The Matron made a decree when I was born. She was dabbling into fairy magic at the time, and heard that if a fairy hears your name, they have power over you. For a few years, nobody was allowed to name their babies, because no name meant no weakness. It got mighty confusing, I hear, until the Matron told the parents they could pick out names.”

“The Matron said it was because we may as well have one of us be safe, but I think she had a dislike toward my ma. I hear my ma talked sass at the Matron once or twice.”

“Hush,” Jake said. “Have some respect for the Matron. She’s twice the woman your ma ever was.”

“Leastways,” the young man said. “He Whose Name Must Not Be Uttered used to be known as He Who Must Not Be Named, but when I came around the Matron decided that name worked better for me.”

“Anyhow,” Cassie said. “Obviously it ain’t you you’re riding ahead of. Is it He Whose Name Must Not Be Uttered?”

The young man shook his head. “Nope. I wouldn’t be riding ahead for him. He’s not dangerous at all since his bullets ran out. He just charges through town, guns clicking. The only thing powerful about him now is his stink.”

“How did you know about her?” Jake demanded, suddenly very intent.

“My sister told me, but she only knew that name. Why can’t anyone talk about her?” The atmosphere seemed suddenly oppressive, as if the sky was pushing down on her.

The young man shifted uncomfortably, glancing up at the sky. “I don’t rightly know. We ain’t been allowed to talk about her for so long, I don’t even know who she was, or what she did.”

“Why can’t you speak of her, Jake?” Cassie asked.

“Can’t talk about that neither,” Jake said. “Tain’t safe.” Jake darted a glance upward meaningfully.
Cassie looked up. A black storm cloud was building rapidly directly above the town, surrounded by blue skies. Lightning played fiercely in its depths.

“Mayhap we could talk about something else,” Jake said. He sounded like he was trying to sound casual, but his voice was very firm.

“Okay then. All right, I’ve got one more guess.” She looked up again. The clouds were already dissipating into the dry air. “Maybe it’s It Whose Existence Shall Under No Circumstances Be Credited As Plausible.”

“Yes, yes of course,” Jake said, with a glance over his shoulder. “Old wives’ tales.” The clouds dissipated as quickly as they had formed.

A cloud of dust was growing over the road in the direction the young man had come from, and he jumped to his feet. “There he is! There he is!”

They all watched as it drew closer. “The mail coach?” Cassie asked.

“Yes, the mail coach! I’m expecting a letter from my sweetheart.”

“Didn’t you just get a letter from her yesterday?” Jake asked.

“And another the day before?”

“Oh yeah,” Cassie said. “My sister was telling me about her. She Who Never Shuts Her Yapper, right?”

The young man looked at her coldly. “She has a name. Mary, which you’d know if you’d bothered to ask.” He turned to Jake. “She’s rude, even for a foreigner, ain’t she?”

Jake shrugged, and went on rocking. 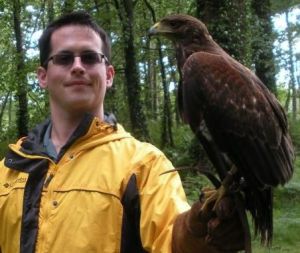 David Steffen writes fiction and code.  He is the co-founder of the Submission Grinder, and the editor of Diabolical Plots which has begun publishing fiction in 2015.  His fiction has been published in many great venues including Escape Pod, Daily Science Fiction, and four times previously in Stupefying Stories publications.

3 Responses to Fiction: “We Do Not Speak of the Not Speaking”
by David Steffen