Fiction: “A Failure to Communicate” by Phil Temples 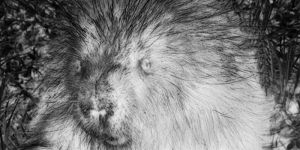 On a morning in late October, the alien stepped out of his spaceship into the bright morning sun in the Boston Commons. For all intents and purposes, Gomph looked like an oversized porcupine. At 60 kilograms, he stood nearly one-and-a-half meters tall. Gomph possessed a somewhat larger head proportionally than an Earthly porcupine. However, like Earth porcupines, Gomph and his race were herbivores.

After coming out of hibernation near the end of his trip, Gomph had spent much of his time studying Earth’s cultures and languages. He was especially fluent in English and spoke with a slight lisp.

“Hello, Earthling,” Gomph said to the first human he met—an obese, seven-year-old, African-American girl. She stood there, eyeing him suspiciously while stuffing her mouth with a Snickers Bar.

“I beg your pardon?”

“The Halloween suit.” She paused to swallow. “You a porcupine, right?”

Gomph pondered the question for a moment.

“I am not thure what porcupine is. I am Tamethillian from the planet Tamethillia. I come from a galaxy far, far away.”

“Oh, yeah?” replied the little girl. “And I’m Santa Claus! You ain’t gettin’ no pocket change from me, no sir-ee! Get lost, porky, ‘fore I yell for Five-Oh.”

Puzzled, Gomph watched the small earth child waddle away in the direction of the Swan Boats.

“Excuse, sir—Oh, very nice costume! You look like big porcupine. Please, you snap photo of us?” He handed the small camera to Gomph, and pointed in the direction of his petite wife.

“I do not understand,” replied Gomph. He turned the device over and over in his paws, examining it carefully.

Already the man’s wife was shaking her head, and gesturing to her husband to retrieve the camera from the strange man dressed as a porcupine.

“Ah! I understand now,” Gomph replied triumphantly. “This device makes virtual recordings of your environment. You desire for me to operate the device, to record images of you and your—female mate. Am I correct?”

The man reached over and hastily snatched the Canon camera from Gomph’s hands. He turned away, brushing off a few needles Gomph had shed on the expensive instrument. The man shook his head and clucked disapprovingly as he walked away.

Clearly, thought Gomph, first contact is not going well. I have thus far failed to communicate with this species. Perhaps it might have been better to establish contact remotely with their leaders, rather than appearing in person to them unannounced.

Gomph walked down the path for a moment. He spied a man sitting on the ground holding a cup. The cup contained a number of small metal objects. The man extended the cup toward Gomph; he shook the cup vigorously, causing a not-unpleasant noise. Gomph reasoned the sound was a form of musical entertainment. He had received radio transmissions containing other similar sounds during his trip to Earth.

Gomph reached out to accept the musical instrument from the man.

“Hey, you goddam porcupine! That’s my money! You’re supposed to make a deposit, not a withdrawal.”

“I am sorry, human. I assumed you were presenting me with a greeting gift. I have traveled from far, far away to visit your species.”

As he spoke, Gomph made a circular motion with his paw around his abdomen to indicate apology. With his other paw, he pointed to himself, then he followed with a sweeping gesture through the sky. He wondered if these particular humans were more primitive than the ones who produced the electromagnetic signals he received. Perhaps body gestures were the best method with which to communicate.

“I don’t give two hoots if you got a full belly or what high-rise you live in. This is my turf! Go trick-or-treat somewhere else. Unless you want to contribute—scat! You’re scaring away the paying customers. Capisce?”

Completely puzzled, Gomph left the strange man and continued walking down the path. Clearly, these humans were very primitive, despite his research that indicated he had landed in a major population area responsible for much of the industry and technology used by their entire civilization. Perhaps there was some intelligentsia he had yet to discover…

Just then, Gomph spotted a large flowering bush near the path. It looked almost identical to the Figjizta plant back home. It certainly smelled like a close relative to Figjizta! Gomph was feeling hungry. He could use a quick snack.

Gomph dropped to all fours and lumbered over to the plant. He broke off a small branch with his paws and sampled a small flower.

Gomph tore off another bite and began chewing with gusto.

Suddenly, however, Gomph felt a sharp stabbing pain in his side. Looking down, he saw a small dart-like projectile sticking out among his quills. The foreign object had punctured his tender skin.

A second later, Gomph fell to the ground, unconscious.

“That’s got to be the biggest porcupine I’ve ever seen in my life!”

“We’re gonna need a bigger cage than what we got in the truck.”

“Yeah, I reckon so. Be careful. You think it’s rabid?”

“Could be. That little girl said it was actin’ real strange. It’s so friggin’ big, she thought it was a person dressed up in a Halloween costume. Imagine that?”

“Well, be careful around it. The doc will know for sure about rabies after he performs the necropsy.” 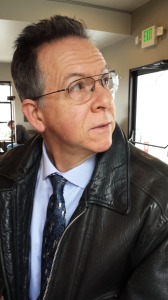 Phil Temples grew up in Bloomington, Indiana, USA. He’s lived in and around Boston, Massachusetts for the past thirty years and works as a computer systems administrator at Boston College. For more than ten years, Phil has written flash and short sci-fi/fantasy stories, primarily for his own enjoyment.

His stories have appeared (or will soon appear) in several online journals, including: Boston Literary Magazine, Bewildering Stories, The Zodiac Review, The World of Myth, InfectiveINk, Daily Frights 2013, Bleeding Ink Anthology, and Stupefying Stories. His first novel, The Winship Affair, was published earlier this year.

In addition to his writing activities, Phil is a singer in a garage band and an avid ham radio operator.

2 Responses to Fiction: “A Failure to Communicate” by Phil Temples