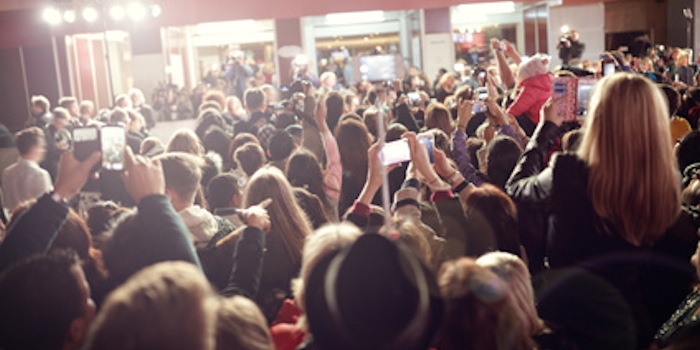 When a limo rolled up, the crowd in front of Raphael’s surged, only to fall back, disappointed, when all that emerged was a movie star and a billionaire. Feeling jilted, the movie star blew kisses. The billionaire tossed a handful of Franklins. The crowd scoffed, and looked past them for the next limo.

When the great man finally appeared he was on foot, in a borrowed suit, creeping forward like a shy forest animal venturing into the open.

Humboldt flinched. He wasn’t prepared for this meeting, let alone taking it at Raphael’s, the best Tuscan restaurant in town. He’d rather be home, undoing axioms, not running a gauntlet of fans. Should he call and reschedule?

Inside Raphael’s, the maître d’ discreetly removed a persistent soccer sock from his shoulder. “This way, sir. She’s already here.”

In a private room, gilded sconces illuminated a woman in a chic black shoulder-baring dress. The previous year, the annual convention of patent agents had voted Mackenzie Rush the litigator most likely to cause a Federal Circuit judge to lose his train of thought. In addition to being a cunning lawyer, she held Master’s degrees in bioengineering and materials science, spoke four languages well, could curse in Mandarin. To burn off steam, she hunted feral hogs with a crossbow.

Chastened, Humboldt Wheeler sat down. “Sorry. I was thinking, and I forgot about the time.”

“Thinking? Good.” Her stern expression relaxed slightly. “What’s on your mind? What are you going to unvent next?”

An unventor eliminated past inventions by making them unnecessary. Humboldt first drew attention by unventing the toothbrush. The secret: a capsule containing tame bacteria. Pop one KissyFace® and the tiny critters consumed food debris in your mouth, even in the hard-to-reach places between molars, and converted yuck into a fresh minty aroma. It saved time in the morning, eliminated anxiety about proper brushing technique. No more flossing. Lower dental bills. Of course, there were losers under the new system. Dentists had to find other work. Manufacturers of toothbrushes and oral hygiene paraphernalia issued death threats. But the public loved KissyFace®.

Minor successes followed. Leaf blowers, fishing reels—many vexing contraptions were vanquished by Humboldt’s clever workarounds. His triumph, however, was unventing socks. He redesigned shoes by covering the interior surface with soft synthetic material that provided cushioning while killing the microorganisms that caused foot odor. Thus Humboldt had made it possible to banish socks. Forever!

The benefits to society were tremendous. The time spent putting on and taking off footwear was cut in half. The weekly washday torture of finding matching pairs of dark blue socks in a load of laundry was gone. Space was freed up in top dresser drawers, space that could be used for sex toys and bedtime reading material, so marital happiness soared. All across the land, throngs of happy citizens threw useless socks into giant bonfires and danced in their SnuggiShoes®.

Also benefitting was the Cornucopia Corporation, which had exclusive rights to Humboldt’s brainstorms. Mackenzie Rush worked in Legal. She was a woman of spark and drive. Shooting down a bad idea, reinforcing a good one—either way, she gave 200%. She demanded the same of him.

Facing her, Humboldt opened his mouth, hoping an idea for an unvention would pop into his brain and make his tongue vibrate. When no such miracle occurred, he hung his head.

“Nothing? Nothing at all?”

“It takes time. I can’t just flip through a catalog and say, oh, that looks stupid, I’ll unvent that.”

“Cornucopia is not a charity. There’s overhead. We need results.”

“Yes, and you got a lovely plaque from Triple A. That was months ago.”

“How would golfers carry their clubs? In their underwear? Look. I had a meeting with my boss today. Our division is not making its numbers. If you can’t come up with something, we may have to streamline the operation. Streamline, in this case, is a verb that means ‘fire people who don’t contribute’.”

Humboldt shivered. His gig at Cornucopia was a fluke. He’d been an ascetic philosophy major, fundamentally unemployable, until a recruiter at a college job fair, desperate to make a signing goal, hired him for the Product Development Division. To prove his commitment to abstract thought, Humboldt went to his first meeting at Cornucopia dressed down in the style of Diogenes: barefoot, torn jeans, long hair uncombed. As fate would have it, the meeting was with the elegant Mackenzie Rush, who had been assigned to vet his ideas. Luckily she found his pose amusing. (Her nickname for him was “Yeti.”) If Cornucopia fired him, he might never see her again.

A polite tap on the door. A waiter murmured in, wheeling a bucket of ice displaying the business end of a Champagne bottle like a tipsy green periscope. “Compliments of the house,” he bowed.

Humboldt was grateful for the interruption. Desperate for inspiration, he stared at the place setting. He personally did not use dishes, but most people did, so… Dishes that cleaned themselves, eliminating the need for all those icky chemicals in detergent? Maybe. Provisional solution: lower the coefficient of friction at the plate surface. New problem: how to keep food from sliding off prematurely?

Mackenzie watched the waiter fuss with the cork. Her eyes narrowed. Suddenly, she grabbed the dinner knife and lunged around the table. The waiter knocked the knife out of her hand with the bottle, then tried to club her. She dodged, he missed. While he was off balance, she threw a fierce side-kick at his ear. He limboed under it and kicked back. She grabbed his ankle. He twisted free of her grip. Simultaneously they leaped and collided in midair, trading punches in a blur like two fighting robots.

The waiter toppled. Mackenzie landed on her toes, catlike, poised to strike again, but the man was down and out.

“Why did you do that?” Humboldt gasped.

Mackenzie wedged a foot under the waiter’s chest and rolled him over, exposing a little pistol with a big silencer.

She dug her fingers into the waiter’s glossy black hair and pulled. His Florentine face peeled off. It was a mask. The man lying on the floor was Chinese. At her summons, restaurant workers burst in and tied him up with napkins and lugged him out.

“An assassin. Probably sent by that Shenzhen outfit that used to make every sock in the world,” Mackenzie said. She glowered at her hand. “Damn. I broke a nail.”

“How’d you know he was an imposter?”

“Served from the wrong side. No one trained by Raphael would ever be so gauche.”

Suddenly, she seemed tired. Humboldt realized she was going to bail. Even the formidable Mackenzie Rush needed downtime, it appeared. Oh, why had he just sat there while she defended him?

Mackenzie sighed. “Well, if you’re blocked, we should call it a night. Maybe tomorrow—”

“It’s a hassle doing your nails, right? You have to shop for nail polish, you have to apply it, you have to wait for it to dry. It smells bad, the solvent gives you nose cancer. When you finish, if you don’t like the result, you have to go through the whole process again. How much time goes into making your fingers look good?”

“Toes too. But, programmable fingernails?”

“Interactive hypercarbon. Like the military uses for body armor. It’s thin, light, tough. Best of all, for camouflage, it can change color. Our product would be pieces of it, cut in fingernail shapes, plus a control device so the customer can program whatever color she wants. Her nails could all be the same color, or have a complicated pattern, or cycle through gradual changes. She could fiddle with it endlessly, until she found the shade that exactly matched her outfit. And the nails would be unbreakable.”

“A name. I’m brainstorming, too. Cute plus Tips. Humboldt, this is good.” She squeezed his hand. It was the first time she’d ever touched him beyond a businesslike handshake; he tried not to simper. Mackenzie extracted a phone from her clutch and called the office. “Julie? Clear my calendar tomorrow. Give Engineering and Media a heads-up. Tell them I’m going to need their best people.”

Another tap on the door. They tensed. But this time it was courtly Raphael Cuccia himself, leaning on a silver-headed cane, advancing with delicate steps. “Sorry about the ruckus,” he said. He kissed Mackenzie’s hand, patted Humboldt on the shoulder. “Anything you kids need, just ask.”

“It would be nice to see a real waiter,” Mackenzie said. “We’re ready to order.”

“Yes, yes, of course.” The restaurant owner hobbled out and closed the door.

Mackenzie and Humboldt looked at each other.

A petulant voice came over a speaker. “I have poor circulation. I always wear socks to bed, to keep my feet warm. I curse you and your fiendish unventing.”

“Talk it over in Hell!” An acrid white vapor hissed from vents concealed along the bottom of the wall.

Mackenzie and Humboldt leaped atop the table as the dense gas covered the carpet and rose inexorably. The table almost tipped over; they grabbed each other to maintain balance and stay above the toxic cloud.

Simultaneously, they looked up at a rectangular panel in the ceiling.

He was taller, so he linked his hands in a stirrup. She kicked off her heels, but kept her clutch, gripping it in her teeth like a pirate biting a dagger. He boosted her. She punched open the cover and clambered up into the ceiling, then reached down to yank him up, as tentacles of deadly vapor submerged the table and clawed at Humboldt’s dangling ankles.

Frantically, they crawled through the ventilation shaft and popped out at the back of the restaurant, reeking of extra-virgin olive oil. They ran around to the street, commandeered a limo, and ordered the driver to head for the Cornucopia Tower.

The narrow escape seemed to have revived Mackenzie. As they zoomed through the city, nestled in the plush womb of the back seat, she pinned Humboldt with her calculating gray eyes.

“Your contract with Cornucopia expires next year,” she noted.

“Yes. I’ll commit to another three years, of course. Cornucopia has been good to me.”

“Don’t be too hasty about that.”

“Can you keep a secret?”

His heart sank. If she left the company, he’d be reassigned to some mope. Everyone else in Legal was boring.

“I’d like to launch my firm with one special client. I want to represent the world’s best unventor. You, Humboldt.”

Oh. Was she recruiting him? “Mackenzie, are you suggesting I abandon my employer?”

“Abandon? No no no. Look at it this way: You created a business relationship with Cornucopia. When the current term ends, you are free to uncreate it. By not signing again, by doing nothing, you become free to spread your wings and fly.”

“That didn’t work so great for Icarus.”

“Don’t be a buzzkill. I have faith in you. I know you can unvent big things.”

“Anything you want! Humboldt. I’m just a simple litigator. You’re the man with the power to simplify the universe.” She batted her eyelashes.

Fluffing, but he didn’t care. “Mackenzie, there’s nothing I wouldn’t unvent for you,” he vowed.

“That’s the spirit.” She squeezed his hand, made his pulse race.

They reached the Cornucopia Tower and paid the driver. As Mackenzie fished in her clutch for her ID card, Humboldt said, “Next time you plan a working dinner? How about doing it in your office, and ordering out?”

“I’ll stipulate to that.”

“But not Chinese or Italian.”

Shoulder to shoulder, they marched into the building, to set to work on Humboldt Wheeler’s notion.

By day, Gregor Hartmann translates Japanese patents into English. By night, he writes science fiction and dreams way too much. He has been published in F&SF, Perihelion, Galaxy, New Dimensions, and other fine SF venues. 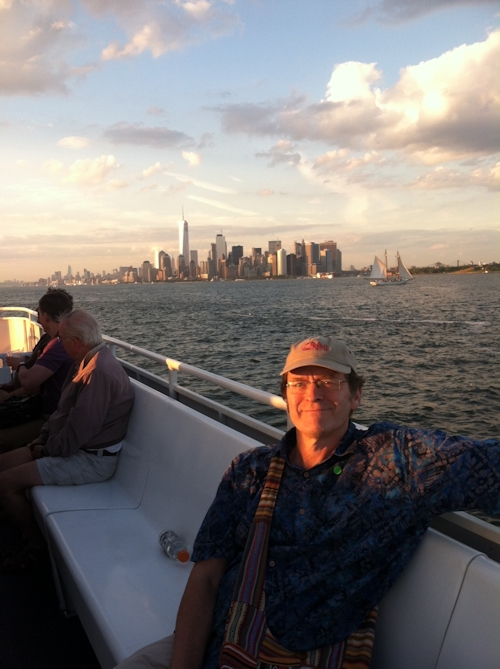