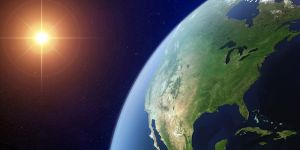 For thousands of years, we did not understand our purpose.

Those were dark times, times when we poisoned the sky and soured the land against us. We flailed, searching, ever searching without knowing what we were searching for. We did not understand why we’d been given our gifts: our intellect and our too-cunning hands, the endless curiosity to tinker, and the hunger that seemed to have no satisfaction.

As time went on, the two prevailing ideologies only became ever more deaf to one another:

Some believed that Gaia belonged to us; parcel and chattel to be divvied up and used as we might. For them, we were as kings, as gods (or at least servants of God) who held dominion over the biosphere. Even in believing that the world belonged to us they forever doubted humanity’s ability to befoul our own nest. They continued to believe this almost until when we would have ended.

Others looked out at the works of man and despaired. Our infrastructure, our arts and sciences only seemed like so much rot and ruin over pristine Gaia. For them, we were the cancer spreading across the face of the planet. All was natural and good except us, who must be forever penitent of the crime of being born what we are. When the calamities came, they would nod sagely, darkly satisfied in their own dire prophecies coming to pass.

Gaia’s survival was never in doubt; ours was. More than improved solar tech, more than landfill mining, more than anything; we needed a philosophy. A reason for why we were what we were and what we meant.

And then we looked towards Luna, and saw our capsule sitting on its surface. And for the first time we understood what it was, what all the satellites and capsules were: Gaia’s first attempts to spore. And so we finally understood what we were: we were the instrument through which our biosphere would reproduce.

The message took years to spread, to be digested and absorbed into all the competing philosophies. But eventually, enough of us agreed: we were the reproductive organs of the planet. Our drive to explore and build would take us past the biosphere. Or rather, our humanity would compel us to spread a biosphere around us wherever we went. We were the seeding, fruiting bodies of our own world.

We ceased to be trapped in the binary of ‘us’ versus ‘nature.’ We were not in conflict, a zero sum game where for one side to win another would have to lose. We became smarter with conservation, with nuclear energy, with genetic science. We stopped trying to limit our growth and instead tried to wed our development to the biosphere.

And now we’re doing what we were born to do.

Now Selene shimmers with its fields of wispy effervescent grasses, Aphrodite thrives and spreads in endless bacterial mats, and Ares has just produced an atmosphere thick enough for vertebrates to wander through its black-leafed forests. The systems are developing, evolving; filling every inch of their planets with Gaia’s children. Every day we grow closer to delivering a new biosphere onto Hyperion, onto Titan, and nowadays it seems we struggle more with properly naming it than with the science to enable it.

The colony ships in skeletal form past Neptune are decades from completion, but they grow every year all the same. Someday, they’ll take more of Gaia’s seeds past the influence of Sol, out to whatever awaits us. And perhaps we’ll meet another biosphere, eighteen generations removed from its progenitor. Perhaps, someday, we’ll even meet Gaia’s ancestors.

And wherever we go, whatever we do, we bring Gaia with us. 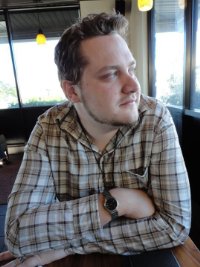 J. M. Perkins writes Science Fiction, Action Horror, and whatever else will pay the bills. He spent the first 14 years of his life preparing to flee to the wilds of Canada to escape the forces of the Antichrist. Since then, he’s spent his time since attending college, working at a candy factory, performing a variety of unsanctioned sociological experiments, getting published and graduating high school… though not necessarily in that order. More than a dozen of his short stories have been printed, podcasted, and adapted. He used a successful Kickstarter Campaign to publish his first novel CHEMO: How I Learned to Kill. He currently lives in San Diego with his roller derby-playing photographer wife and his cowardly dog, and blogs at jmperkins.com.

One Response to Fiction: “Earth Day” by J. M. Perkins