Fiction: “Over the Top”
by Anton Rose 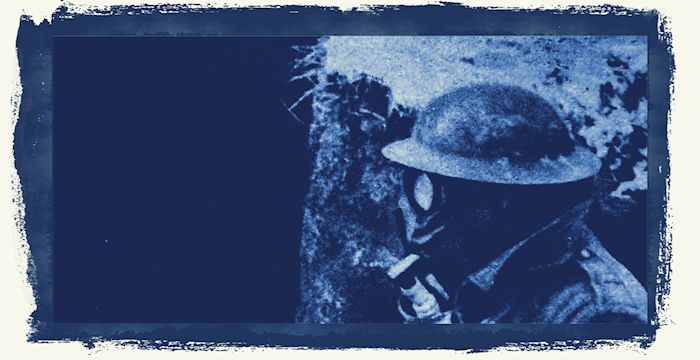 The first time I went over the top, I pissed myself.

We stood in line like a huge grey centipede, uniformed bodies stretching away in both directions. To my left was Sanders, a toffee-haired girl with scars and dirty patches on her face.

“This your first time?”

Something exploded above us, shooting glowing tracers across the sky, sparks of light breaking through fog. The ground shook, and in the distance we heard a sound like the earth yawning apart. That was when my bladder emptied itself, soaking a patch into my trousers.

Sanders look down, but there was no disgust, no embarrassment, no ridicule in her eyes. “First time’s always the worst,” she said.

All along the countless miles of trenches, at intervals of a hundred metres or so, they had installed speakers mounted on flimsy metal tripods. When they weren’t toppled over into the mud, they spat out regular announcements and words of encouragement. Fight for a Better Tomorrow! they said, You Are the Heroes of the Future, Today!

In my pocket I had a photo of myself and my daughter. I was holding her in my arms, and she was looking at me, smiling. I didn’t want to take her with me into the darkness, so I folded the photo in two and wedged it into the trench wall. I wondered if I would ever see her again.

When the sirens blared out I checked the fastening of my helmet and gripped my rifle. I looked at Sanders, and there was hardly any expression on her face. “See you on the other side,” she said.

We clambered over the trench wall and began the assault. I ran stooped over, my head held forwards, but in my peripheral vision I could see men and women ahead of me, struck down by bullets and shells, their bodies flipping and twisting in grotesque distortions. To my left Sanders sprinted ahead, firing shots into the darkness.

We could just see the outline of the enemy position when the shell landed in front of us. The explosion sent us flying through the air, and in my last seconds of consciousness, before I landed on the harsh earth, I felt the shrapnel hit my shoulder and watched my severed arm fly through the air, as though it was reaching out for something.

I woke with my back against the trench wall. Sanders sat across from me, her eyebrows raised. My whole body ached. My jacket and shirt were lying on the floor, leaving me in my vest and trousers. It hurt to turn my head, but I forced myself to look at my shoulder. My arm was reattached, stitched together with thin wire.

I looked at Sanders again. She was smiling. “Am I dead?” I asked.

She burst out laughing. “No. Not quite.”

“You’ve been out for about sixteen hours. Mainly shock, I guess.”

“We lost. Had to retreat. When the fog came this morning I went out and brought you back. Found your arm a few metres away from your body, stuck in the mud.”

With my right hand I felt the stitching, where the signs of the wound still remained.

“There are some things they don’t tell you when you sign up,” she said.

I began to reply, but I was interrupted by the blare of the sirens, and words from the speakers. For glory! For victory! For Honour! Sanders helped me up and gave me a rifle. “Let’s go.”

The second offensive was more of a success, although I can take little credit for it. Charging across the dark earth I slipped and fell into a shell crater. By the time I managed to climb out, the forward trench had already been taken.

I found Sanders sitting with her back against the wall. When I opened my mouth she held her hand up, interrupting me. “You’ll have to speak up,” she said. She turned her head, and I saw a mangled wound where her left ear used to be. “I couldn’t find it in the mud. I’ll have a look again in the morning.”

Over the next few weeks I settled into the regular rhythm of the war. In the afternoon, we attacked. In the evening, we slept. And in the mornings we searched the mud for bodies and limbs, pieces of flesh to stitch back together. After a while, wounds that once brought excruciating pain brought only numbness, a strange dulling. Sanders was a constant companion, but we didn’t talk much. No one did.

I had been at the front for several months before I found the photo. After a successful offensive, the speakers proclaimed our ongoing triumph. Our March Forwards is Unstoppable! It is Inevitable! The photo was wedged into the wall of the trench, and when I wiped the mud clear I saw it was ripped in two horizontally, so all that was left was our shoulders and necks, dismembered. I tried to imagine my daughter’s face, to piece the picture together in my mind. But when I closed my eyes all I could see was mud and fog.

The sound of the sirens filled the trenches, while shellfire burst through the sky overhead. Sanders was the first to go, launching herself into the fray. Standing to my right was a new recruit, a teenage boy. He vomited into the dirt. When he was finished, I passed him a rifle. “First time’s always the worst,” I said.

Anton Rose lives in Durham, U.K. His fiction and poetry have appeared in a number of print and online journals, and he is a Writers of the Future winner. Find him at antonrose.com or @antonjrose