Inventory Clearance Sale: It Came From The Slushpile 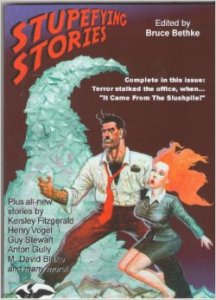 Yes, it’s our original print edition, done as a prototype to see just how closely we could emulate the look and feel of a vintage digest-sized pulp in what was initially planned to be a quarterly magazine. We spent a small fortune on this one, and aside from my never being really happy with the way the cover turned out, it worked…but it also convinced me our money was far better spent on paying writers and artists more rather than on keeping paper mills and print shops in business.

Nonetheless, we still have a few boxes of copies of this one taking up space in the warehouse, so from now through December 31, 2014, we’re selling it out for the blowout price of $1.99, plus the usual Amazon shipping charges. Then, as of midnight Central time on 12/31/2014, it’s going out-of-print, never to be reissued again!

P.S. Be sure to get your copy from K&B Booksellers, as K&B is the only dealer selling fresh-from-the-box new copies at this price. (Some optimists out there think this one is a valuable collector’s item worth $45 or more!)