Fiction: “No Accounting for Taste”
by Lance J. Mushung 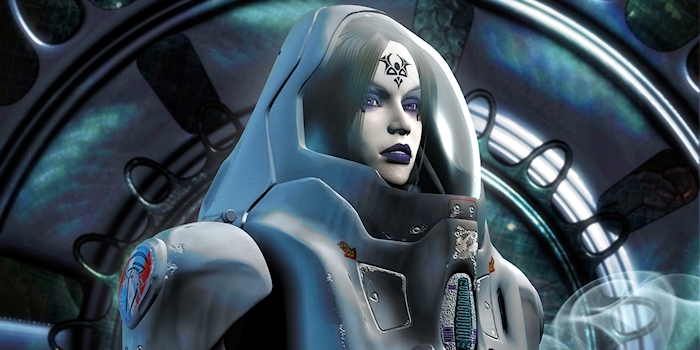 I sat on a bench on one side of the small, battleship-gray drop bay of my patrol cutter, Oliveria. The last month and a half of the patrol had been mind-numbing, but taking a ship of wasters into custody would soon make it all worthwhile.

Wasters violated the regulations prohibiting the dumping or processing of toxic waste anywhere except on Ogre, a rogue planet at the edge of nowhere. However, with typical perversity, the government had made the regulations difficult to enforce. It stipulated wasters had to be caught red-handed, and that was exactly what I intended.

The other two humans of my crew, Ngoc and Dieter, were sitting on the bench across from me. The faceplates of our sky-blue environment suits were open, allowing me to study their expressions with no trouble. Ngoc’s delicate light tan features indicated satisfaction, the look of a person about to right a wrong. Dieter’s Nordic face looked eager.

I needed no mirror to know my expression. During a drunken celebration right after graduation, I’d overhead fellow graduates talking about me. One had said, “Antha’s face changes from pretty and gentle to feral and fierce whenever she anticipates action.”

Dieter twisted toward Ngoc. “I wonder why the wasters come here instead of just dumping their tox into a star somewhere? There’s much less chance of getting caught that way.”

“You can ask when we have them. All I know is Mother Nature here will thank us.”

I ignored their ensuing chatter and whispered to Olive, Oliveria’s A.I. and pilot, using my suit mic and our private frequency. “I’d like to work on the summary of an arrest report.”

Olive answered in her distinctive melodic voice, “Ready for dictation.”

“Oliveria was cruising our patrol sector at a fraction of light speed when the tanker ship Sterculius hopped in. Sterculius didn’t detect us and hopped away after recharging her drive. Our sector is well outside normal shipping paths, so we identified her destination while her Einstein-Rosen bridge was open. A recon-bot sent there showed the tanker entering an unexplored blue star system. We investigated and found the planet I named Sapphire because so much of her surface has a bluish tint. Sapphire is Earthlike, except for a natural incredibly high level of what we’d call pollution. Her water and ground contain deadly amounts of hydrocarbons and heavy metals, and the atmosphere holds poisonous concentrations of sulfur dioxide, carbon monoxide, chlorine, ammonia, and methane. Even with the unusual environment, we had no trouble finding six dump sites with varying levels of toxicity. How does that sound so far?”

I pondered a question for a few seconds. Should I mention Sterculius was the Roman god of manure? I decided yes. The name was clever and even the Commander, the dour old goat, would be amused. The only more apt names would have been Exxon Valdez or Torrey Canyon, ships in legendary ecological disasters back on Earth two centuries earlier.

Olive said through the drop bay’s speakers, “Sterculius is entering the lower atmosphere.”

Dieter grinned. “It’s sparkly to finally have something happen on this patrol, and I can’t say I’ll miss this planet.”

A teasing expression played over Ngoc’s face. “What are you talking about? Look at how nice and scenic this spot is. Wouldn’t this be a great place for a house? We’re on the bank of this meandering stream surrounded by a forest of beautiful trees with royal-blue crystalline bark, although I have to admit the chartreuse leaves look a bit sickly.”

“Yeah, it’s great here. If only you could get the hydrocarbons out of the water and the heavy metals out of the soil. Oh, and breathe. The phants can keep it.”

We’d named one numerous species around the dump sites phants. They reminded me of small earless elephants, if an elephant had dappled blue feathers and three fingers on the tip of its trunk.

Olive said, “Sterculius is approaching site B and we can be hovering over her in 1.47 minutes.” She added on our private frequency, “Congratulations on your insight in choosing this parking position.”

Sites B and D had the lowest concentrations of tox, so I’d guessed the wasters would use one of them next and picked our location accordingly. We’d seeded all six sites with spy-bots just to be safe though.

I closed my faceplate. “Ngoc, Dieter, go to suit air and take positions.”

They closed their faceplates and grabbed their plasma pulse rifles from a rack mounted on the bulkhead. We all stepped over the yellow and black stripes separating the deck from the triangular drop sled and stood facing forward with our backs to rectangular poles mounted on the sled. It always reminded me of old photographs I’d seen of passengers called straphangers standing in a subway train.

“Olive, Ngoc, Dieter, can you read me?” All three confirmed. Our common radio frequency checked out.

Olive said, “The Generated Gravity Field for each pole is functioning and the sled is ready.”

A faint tug told me my pole’s Gigi Field had switched on. It would keep me in place through any maneuvering and insulate me from the sled’s high braking as it landed with no more impact than a fluttering leaf.

I said, “Olive, how long until they land?”

“Three minutes plus or minus nine seconds.”

Olive began playing vid from the spy-bot at site B on the view screen mounted on the bulkhead in front of the sled. In a bit less than three minutes, the vid showed Sterculius setting down in a grassy field between a forest and a large lake polluted by tox. The ship looked like a water tank with engines, a silver-gray cylinder approximately 200 meters long and 30 meters in diameter.

I said, “Olive, lift off and get us there as planned.”

My plan was simple. Oliveria would come in fast and low in stealth mode. The wasters would have no way to detect us until we were on top of them. We’d hit the ground and board Sterculius while Oliveria hovered overhead with cannons ready. Olive would transmit my demand to surrender on broadcast frequencies and put any replies onto our common frequency.

The vid focused on two people walking toward the treeline.

Ngoc said, “Are those two going into the forest to piss on the planet, too?”

I almost laughed at her quip. Dieter did. Whatever they were doing, it had made the arrest easier than I could have hoped. We might have the entire waster crew in the open.

I said, “Olive, put us between them and their ship.”

Olive changed the lighting to the ambient level on the ground and let in Sapphire’s noxious atmosphere. After the lights blinked three times, the sled fell free and touched down before the wasters could do more than turn toward it.

I glanced up into the hazy pale-blue sky. Oliveria circled Sterculius like a dark gray fly buzzing a soda can.

Olive said, “Cap, there is a concentration of phants nearby in the forest.”

“Okay. Put me on the broadcast frequencies.”

I hand-signaled Ngoc and Dieter to stay put and strolled to the wasters as if I owned the planet. I left my sidearm holstered.

I stopped a meter from them and smiled. “I’m Lt. Antha Sun, Captain of the Federal Patrol Cutter Oliveria. You’re now in custody, charged with polluting this planet.”

My smile changed to a frown. The faces of the wasters were visible through their breathers, and they didn’t appear the least bit upset.

One—the leader, I assumed—looked dismissive and jerked his thumb over his shoulder. “You need to talk to them.”

Dieter said in raised voice, “Cap, we’ve got movement from the forest.”

A phant was trotting toward us.

“Ngoc, Dieter, do nothing.”

I’d made the mistake of a dumb plebe. There were no structures, so it hadn’t occurred to me that the phants could be a higher life form. I shot an evil look at the wasters. They were polluting a planet containing intelligent life. Yet the leader had started grinning as if he’d pulled off an enormous practical joke.

The phant stopped to the left of the wasters. It stared at me with large aquamarine eyes for a couple of seconds before speaking. “Why are you troubling our friends?” Its trunk swept past the two wasters, leaving no doubt who the friends were.

“I’m Lt. Antha Sun. Who do I have the honor of addressing?”

“Herd Elder, I’m here to stop your so-called friends from filling your world with filth from ours.” I didn’t ask if Herd Elder was its name or title. It didn’t matter for the moment.

“It’s garbage from our industries.”

“We find it delicious.”

Nobody had ever said they liked tox before. My mind raced. How had the wasters come across Sapphire? How had they learned the phants liked tox? What the hell would the Greens and the government say? Were the regulations against tox even valid here?

The waster leader said, “Got anything to say to that, Lieutenant?”

I didn’t want to see the smug expression that must have been on his face to go with his tone. I maintained eye contact with Herd Elder. “You’re certain you like everything these people bring?”

“You’re not saying that because of threats, are you?”

“There are too many of us for threats.”

Herd Elder raised its trunk high. Several hundred phants stepped out from the trees on a broad front.

Dieter said, “There’s a lot of them.”

Ngoc sounded alarmed and Dieter frightened. A glance over my shoulder confirmed my impression. They both held their rifles as if they expected to need them.

I said in my firmest command voice, “No shooting.”

No good could come from a confrontation. At worst, even with the ship’s cannons, we’d be overrun like 19th Century hunters standing before a stampede of bison. At best, we’d get away after slaughtering hundreds of phants.

I bowed to Herd Elder. “I apologize for the misunderstanding. We’ll leave now.”

I turned to Ngoc and Dieter. “Ngoc, Dieter, we are done here. Olive, come down and pick us up.”

The wasters began laughing. I muttered, “Bastards,” and started grinding my teeth behind pursed lips.

Back on Oliveria, I continued grinding my teeth, when I wasn’t muttering curses. As I passed the wardroom, I overheard Ngoc and Dieter talking. Dieter said, “Well, there’s no accounting for taste.”

I stopped in the corridor and started nodding with raised eyebrows. Dieter had given me the final sentence of my report.

Lance J. Mushung graduated from the Georgia Institute of Technology with an aerospace engineering degree. He worked for over 30 years with NASA contractors in Houston, Texas performing engineering work on the Space Shuttle and its payloads. Now retired, he is trying his hand at writing science fiction.