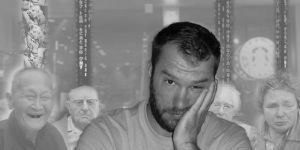 Oh great. I was just about to level-up, now this. I finally get a 15-minute stretch of mindless zombie-killing fun, and grandma has to bring me back to reality.

“Young man, I was told that you’re tech support?”

I wish people would quit telling people things about me. Even if they’re true.

I managed to pull that off without sounding too insincere.

“It’s my husband. He’s having a little trouble today.”

He’s sitting in one of the big comfy chairs. Must have gotten here pretty early to score that. Came in for the updates. Typical Tuesday.

“Ma’am, he has the Blue Eyes of Death. You need to reboot him.”

“Oh, he doesn’t like it when I reboot his system. He never thinks I’m doing it right. Do you think you could do it for me?”

Oh, I can. But I’ll have to get up, make my presence known. On a Tuesday.

“Okay, I’ll do it this time, but I’m really not supposed to touch the customers, you know.”

I accept her thanks and walk away before he can speak. On my way back to my table I perform a quick scan of his system. Cleaned out a couple of worms, closed some ports, and install a backdoor of my own, just in case.

I detour to the counter and grab some coffee. That’s one of the perks of working tech support at Starbucks—all the coffee you can drink. Also one of the drawbacks.

Coffee in hand, I turn around and find myself standing face-to-face with Barrister Musa Issah. Today he’s wearing a white linen suit. Yesterday it was a blue one. The red one is my favorite. Before I can hit delete, he’s talking. He was the solicitor for the late Sanni Abacha, President of Nigeria. He has been given my name as a trustworthy person. He would like me to assist him in getting a gazillion dollars out of Nigeria and into the hands of the rightful heirs of Mr. Abacha.

His accent is much smoother this time. And the woman crying in the background is new. Almost touching.

My table is no longer available. Some guy’s sitting there with an antique Macbook Air. I hear they were pretty cool, for externals. But I don’t have time to admire it. I want to find a place to disappear and avoid the Tuesday madness.

“You just wink at the Starbucks logo”

Ever since implants first became popular, the municipal grid has been overloaded. They say free wi-fi hotspots were popular back around the turn of the century. With all the grid congestion, they’re making a comeback. Especially on Tuesdays.

“I don’t see the logo the girl at the counter said just look left but I don’t see anything and I’ve looked all over the store could you just show me where it is?”

It was a great idea, really. Plug a cable straight into the occipital lobe, and voila, internal video. Of course if you wanted to get data into the machine, you had to be more daring. The very early adopters were lobotomized.

“Keep your head still, ma’am, and look left. No, just move your eyes. Okay, now, look up. You should see the logo. Okay, double-wink on it.”

But eventually the technology caught up. Processors continued to get faster. People started using the implant to control the autonomic functions of their brains. It freed up gray matter for other uses. A couple of Nobel Prize winners were found to have done it, suddenly everyone thinks it’ll make them Nobel material.

Then the quantum chips hit the consumer implant market. It was actually feasible to let the implant take full control, as long as you kept it updated. You did not want buggy code in charge of your brain.

First, it was just quirky behavior. Like everybody ordering the same espresso drink and asking for an umbrella. Or when everyone began to hunt and peck at their virtual keys. They’re virtual. There’s nothing to hunt.

After last Tuesday’s update, three men went into the street and killed a dog. The whole shop applauded. And then joined in to help when they started eating it.

Now the patrons don’t react to anything, except me. They always notice me. Especially when I try to leave. I’ve been in this coffee shop for a week, now. Even if they would let me leave, I’m not sure where I could go.

It’s noon. Time for the updates.

JOHN OGLESBY is the sixth child of a Baptist preacher, but he never let that stop him from having a good time. He once wore the robes of a Supreme Court justice in his home state of Arkansas, survived both Hurricane Camille and the KKK in southern Louisiana, and once trained a dead chicken to wrestle in Texas. (The chicken won.) He currently resides with his smoking hot wife in North Carolina, where he writes software to test software.

“Tech Support” first appeared in Stupefying Stories: It Came From The Slushpile, and is reprinted here by kind permission of the author.