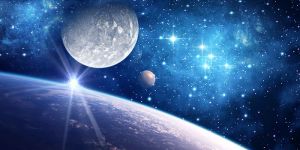 Jackson always calls hyperspace the “waters of oblivion.” It seems an odd affectation, out of character with the rest of his carefree personality. His parents are both dead and he has no close relatives; he’s told me he plans to work the hyperspace runs until he’s thirty and then retire young and wealthy.

I asked him about the phrase once, and he wouldn’t answer me. Two days later ship’s time, after we’d completed the three-jump journey to the Karibib outpost to drop off our cargo, he turned to me and said “I took it from an ancient text.” Then he walked away.

I didn’t realize what he’d been referring to until many minutes later.

Getting ready for a jump is easy. Put in all of the navigational information and the computer does the rest of the work. The jump itself only takes seconds. At least, that’s what all the systems say. But while you’re in a jump, hours or days or even weeks go by in the rest of the universe. And here’s the thing. All those seconds? You feel them.

Doctors and biologists say that’s impossible, that it’s a trick of the mind. That since the body doesn’t go through more than a few seconds of biological processes—respiration, circulation, digestion, and the like—that the brain simply cannot actually be experiencing an extended period of time.

There are armchair scientists and weekend philosophers who debate this endlessly on the nets. Some say it’s proof there exists something separate from our physical bodies that contains our consciousness. A soul. Others insist there must be a biological reason, even if we don’t understand it yet. One of the most notable proponents of this latter view raised money and arranged to have himself brought on board a jump ship as “cargo” several years ago. He returned no less confident in his writings on the topic. And yet, when a soul advocate offered to put up the money for him to make a second trip, he declined.

“How’s David?” I ask my partner via the hypercomm. Jackson is sleeping and I should be sleeping, too. But the ship doesn’t have hypercomm capabilities and the morning will be taken up with the preflight checklist for the jumps to Namanga Station with no time for personal matters. Our son’s first birthday is the day after tomorrow—while my ship will be off navigating the waters of oblivion—and I want to talk to him and to my partner. David was three months old when I left home on a month-long ship’s-time run.

“He’s gorgeous,” she tells me. “Standing up and ready to walk. Stinky as ever.” She laughs with this last comment and the sound brings a tear to my eye. I don’t know why I feel sad but I rush through the rest of the call, tell her that I miss the two of them and love them and that I’ll be home soon. I’m thinking of the four more days of our run, not the six weeks and two days that she and David will experience.

Lying in bed, I realize that the time difference is why her laughter pained me so much. I hurt, having only missed her for twenty-six days. I feel like it should be hurting her ten times as badly to have missed me for ten times as long.

For a moment, I feel righteous, but as quickly as it had blossomed, the hot anger disperses. I can’t know that she’s not hurting and even if she isn’t, how could I justify wishing on her suffering tenfold my own?

David took his first steps while we were in hyperspace. Karla tells me about this and also about the fever he has spiked while we talk via the Namanga Station hypercomm. I can hear him wailing in the background. She tries to soothe David but he won’t be calmed.

We say our “I love you”s and goodbyes, I tell her to take good care of David, and then I end the communication. But in the morning, I can’t focus, worried about David’s illness, knowing that when we arrive at Shimoni—our final drop for the tour—he’ll almost certainly be better. Unless he isn’t.

Jackson is working with the navigation system and I slip away to contact Karla again.

“A double ear infection,” she tells me. “They gave him antibiotics.” David lets out a strong cry in the background. Her soft voice, soothing him, soothes me. “The poor guy hurts, but it’ll be over in a few days.”

Jackson glares at me when I come back up to the bridge.

“I’ve got everything entered into the computer,” he says. “We’re already behind schedule, but if you still want to confirm the inputs—”

I shake my head as I’m buckling into my seat. “The sooner we leave, the sooner we get home.”

There’s the usual sensation, a mind able to think but a body paralyzed. The jump is supposed to be eight days outside time. Not the longest jump I’ve ever done, but not a short one either.

There’s no point of time reference but the jump feels too long. Some people feel this way in hyperspace regularly; they end up not being cut out for the job. I’ve never had this experience before and I’m sure it’s been days too long. And still it goes on.

At some point, I feel my mind tuning out, closing down on itself, like going to sleep though there’s still some part of me that’s aware that time keeps on slipping by.

When we drop out of hyperspace, I feel like I’ve been socked in the gut. While I’m catching my breath, Jackson is already working the computer.

“Shimoni is not within range,” he says.

“I’m getting a signal in the sector. But…”

“It’s not an outpost I’ve ever heard of before.”

Fortaleza Station was built twenty-nine years after I was born. My son, David, was six years old then.

It has been in operation for eighteen years.

The station crew members are happy to welcome us, even though the supplies we bring are all amusingly outdated as far as they are concerned. They check over our ship and determine that our jump coordinates were set incorrectly. That, combined with a flaw in the computer failsafes, brought us to this point. We’re lucky, they say, that we ended up so close to a new station rather than in a vast expanse of empty space.

They offer to help us track down our relatives. Jackson, already alone, declines their help. I thank them for the offer, though I am afraid of what they will find out.

The next day I’m sitting at a hypercomm station, sleeker than those I remember, looking at Karla and David. He is my age and looks it. Karla’s hair has started to go gray and there are wrinkles on her face. She looks strikingly like her mother.

David has no memories of me. Karla remarried a dozen years ago, long after I was declared dead in absentia. We talk for a while and find ourselves quickly out of things to say. Twenty-three years summed up in under an hour.

She smiles and says it’s good to know that I’m okay. I am about to tell Karla that I love her, but I catch myself, stumbling over the first word in the sentence, changing the rest to say that I will be in touch soon. She smiles again and nods, not realizing how close we came to an awkward moment, to having to face that the love she had given up for dead decades ago still burns hot in my mind. In my body.

We break the connection.

I lie in bed that night, thinking about Karla and David. Part of me still feels like our life together should still be within my reach, but I know that’s only a dream. That there’s no going back to what I had so recently, so long ago.

Tomorrow morning, Jackson will be on our ship, taking the twenty-three-year jaunt back to Earth. He’s content with the idea of getting back to work in a world nearly fifty years beyond the one he left last month.

I’ve made up my mind and I will be on the ship, too. Content, I’m not. But resigned? Well, I guess that’s close enough.

I think about using the hypercomm one more time before we depart to let Karla and David know my plans. To say that I’ll see them—if they’re still alive—when I get to Earth. But I realize there’s no point in that. 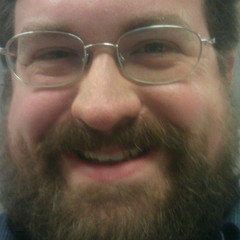 MICHAEL HAYNES lives in Central Ohio. An ardent short story reader and writer, Michael has had stories appear in venues such as Beneath Ceaseless Skies, Nature, and Daily Science Fiction. He is Co-Editor at Goldfish Grimm’s Spicy Fiction Sushi. His website is http://michaelhaynes.info/.

3 Responses to Fiction: “Waters of Oblivion” by Michael Haynes