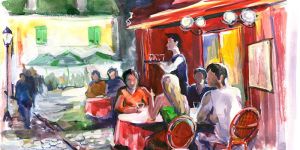 I have it bad for la chica bonita. Go figure. I live in Minnesota. I’m as Nordic as Nordic gets. I come from that ancient genetic factory somewhere north of Oslo that makes ’em tall, broad, and strawberry-blonde, with a beard you could hide a battle-axe in. In school they called me ‘Harald the Red.’

Yeah, that’s right, with two a’s and no o. My dad is a history buff. He shook the name out of our family tree somewhere. It last belonged to my great, great, great– somebody.

So why is it that Nordic blond women do nothing for me? You could pull me through all of time and space and set me up on a hot date with Elke Sommer or Ursula Andress at her absolute peak…

And somewhere, something ancient deep inside my brain would say, “Eh. I knew your mother. I knew your grandmother. I knew all your foremothers back to the dawn of our race, and frankly, they were all a bunch of depressed neurotics.”

But introduce me to some dulce little chica–let her bat those big brown eyes at me, or wiggle her cute little butt in my general direction. Show me two minutes of Salma Hayek doing her snake-dance thing in From Dusk ‘Til Dawn…

Anyway, that’s my theory. My Norsemen ancestors didn’t go viking for the plunder. They went viking to get away from the Norse women. So when my favorite coffee shop hired a new waitress, and she turned out to be 5-foot-1 of dark-haired, dark-eyed, brown-skinned chicana beauty, I was instantly, hopelessly, smitten.

And that’s when she popped her little surprise. “Harald,” she said, “you’re a sweet guy. But there’s something you really need to know about me, first.”

“No, not that. I mean, yes, I am, but–well, if you really are serious about going out on a date with me, there’s somewhere else you need to go with me, first.”

And that’s how we wound up driving through Lowertown, just after dark on a Sunday evening. I thought it was some kind of joke or test, at first. The junkies, the winos; the gang tags spray-painted everywhere. “That’s where we’re going,” she said, pointing.

“You’re kidding,” I said. I craned my neck to look at the name carved in the marble over the entryway. “The Rampant Loon Media Building? What on earth possessed them to locate their business here?”

“They got a great tax break from the city.”

So I found a place to park the pickup truck, and we got out and took the sidewalk to the main entrance, stepping over the sleeping bums and the puddles of I don’t want to know what and walking past a dark alley entrance that brought all my willies and cold shivers out to dance in a conga line on the back of my neck. But we made it into the lobby okay, got waved past by the security guard, and took the elevator to the 13th floor.

Where we walked into a meeting. Huh. This was something I’d never heard of before: Were-Creatures Anonymous. It was some kind of demented variation on a twelve-step program for people who thought they were—

Well, as my adorable little chica put it, “Hi. My name is Tina, and I’m a were-jaguar.”

Actually, for a bunch of people who were clinically nuts, they weren’t half-bad. They were for the most part calm, sober, and pleasant—except for this Scott guy, who reminded me of a used-car salesman and left me with a deep desire to wash my hand after he shook it. Everyone there accepted that I wasn’t one of them but was only there to support Tina, and they congratulated me on my open-mindedness and all that; it was pretty embarrassing, actually. But we got through the coffee hour okay, and sweet little Tina really seemed to be warming up to me. She kissed me in the elevator, and held my hand and cuddled up to my side as we left the building and walked back to where I’d parked my truck. As we passed that dark alley entrance that had given me the willies so badly on our way in, three young thugs stepped out of the shadows. I saw the flash of a knife blade.

And then my world turned red.

The next thing I knew, I was waking up naked in a strange bed and my left arm was numb. I turned my head, saw that the naked woman laying on my left arm was Tina, and from that made the leap to guessing that this was her apartment. I sure hoped the bedroom was always this much of a mess.

I must have made some sound or somehow disturbed her. She slowly opened those beautiful big brown eyes, and then just as slowly eased into the most amazingly satiated smile and snuggled in closer.

“Darling,” she whispered, “why didn’t you tell me? Madre di Dios, you were magnificent! So strong! So fierce! So…insatiable!” She bit my earlobe, gently, kissed her way down my neck, and then worked her way back up to my ear again. “Why didn’t you trust me? Why didn’t you tell the group that you’re—you’re—” She tched. “Were-bear seems such an inadequate name.”

“Because it is, and I’m not,” I said. “The correct term is bearserkr.”

“Whatever.” She kissed my neck again, harder and more insistent this time. “Whatever it is, you were unforgettable last night!”

That’s when I finally reached across with my other arm, and pulled her on top of me, and kissed her on the forehead and held her tight.

And stared at the ceiling, and let my anger soar up to the sky. Yeah. Unforgettable.

Damn you, Odin, and damn your thousand-year curse! They all say that! But just once, would it be too much to let me remember it? 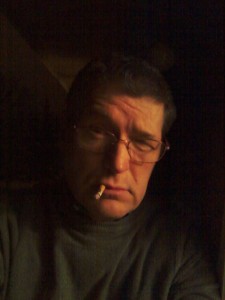 BRUCE BETHKE is best known for either his genre-naming 1980 short story, “Cyberpunk,” his Philip K. Dick Award-winning 1995 novel, Headcrash, or lately, as the editor and publisher of Stupefying Stories. What very few readers have known about him until recently is that he actually started out in the music industry, as a member of the design team that developed the MIDI standard and the Finale music notation engine (among other things), but now works in the supercomputer industry, doing stuff that is absolutely fascinating to do but almost impossible to explain to anyone not already well-grounded in massively parallel processor architectures, Fourier transformations, and computational fluid dynamics.

In his copious spare time he runs Rampant Loon Press, just for the sheer fun of it.

ABOUT THIS STORY: “First Date” was written in March of 2009 for Curse of the Were-Weasel, an online collaborative fiction experiment that ran from June of 2008 to June of 2009 and then twitched a few more times before finally giving up the ghost in 2011. The concept was to create a multi-author, multi-character, multi-threaded, audience-participation narrative, and to present it in the form of an ongoing series of vignettes taken from the weekly meetings of the WCA—that is, Were-Creatures Anonymous, a 12-step program for people suffering from ALPS (Acquired Lycanthropic Polymorphism Syndrome).

The experiment failed: it was too unstructured and anarchic to survive without assertive leadership, and the audience participation aspect never really worked. Still, as with so many of my experiments, it produced interesting wreckage, and I learned some things that later proved useful elsewhere.

This story appears in SHOWCASE not because I think it’s particularly brilliant, but because I need a short story I can hack around with while experimenting with the SHOWCASE site design, and this one is both available and I don’t need to ask anyone else’s permission before messing with it.

One Response to Fiction: “First Date” by Bruce Bethke