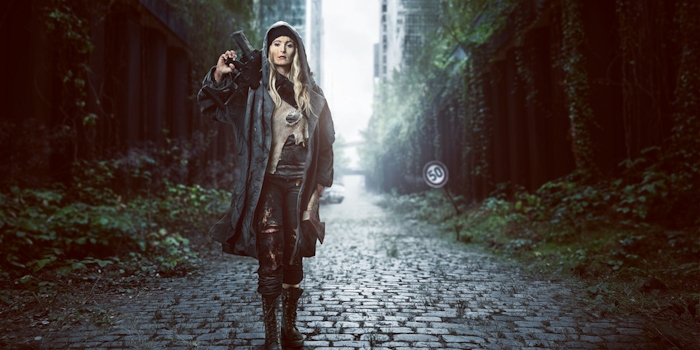 The Street Fighter wandered past the ruined shores of Arlington.

Over the hill, he could see them gathering by the remains of Reagan International Airport.

He wondered if they would accept him. The mean Streets were nothing compared to the Open Road. These were the elite who had pounded America’s Asphalt into submission since the carnage began.

A tall icy blonde stood atop the hill with her arms folded. The Street Fighter took a deep breath, gathered his courage and approached. He had traded in his simple padded Street clothes for Kevlar and spiked plates and upgrading his arsenal with a chemical shot gun and germ grenades. If nothing else, he’d look like one of them.

“I’m Bob,” Actually, his name was Kevin. But he styled himself after his heroes—Max, Mel and Tom. “Was hoping to join up.”

The woman looked him over. “Any experience?”

“I used to hit the Streets in New York City.”

The woman’s eyes flickered with recognition.

“You’re Broadway Bob,” she said. “Decent work you did up there.”

The thought of having a reputation amused Bob.

A few months ago, The Great White Way had risen up and devoured the theatre district. It had been snacking on bridges in Central Park when the Street Fighter struck, armed with only his wits and a few simple weapons.

The battle had lasted nearly an hour. But in the end, Bob finally closed down Broadway with a mixture of plasma attacks and bacterial bombardment, reducing it to a quivering pool of sludge that was washed into the East River later that night.

“Okay, we’ll give you a shot,” said the woman. “You call me Annie Domini Nix, leader of—”

“Of the Road Killers,” Bob said, trying to contain his awe.

They were legendary, the Road Killers. Years ago they had crushed the treacherous stretches of Route 66. Now they were systematically working their way down the East Coast in a furious war against I-95. Bob had tracked them to DC after they had passed through Jersey.

She frowned. “Don’t get cocky. We may be anti-social loners, but we work as a team when there’s work to be done. Everyone does their share. Everyone pulls their weight. No mavericks here. Get me?”

She led Bob down a grassy path flanked by piles of huge crusty mounds.

Anything the Roads couldn’t use was expelled in disgusting toxic heaps. Bob wondered if the scientists had even considered the digestive cycle of the synthetic asphalt they were cultivating. Originally devised as a way to free America from its dependence on foreign petroleum, the “petrorganisms” were grown to fill in potholes and repave dilapidated freeways. Self-healing, they repaired themselves by consuming tar, wood or any other material they came in contact with.

The idea worked. Soon, petrorganisms were used on roads all over the country. But somehow, no one was sure how, the microbes had knitted themselves into neural chains that developed into a primitive consciousness.

Within a year, anything paved had been transformed into an ebony ribbon of ravenous appetite.

Bob was just a boy when Flatbush Avenue ate his parents…

How far he’d come since then.

Nix introduced Bob to the team and laid out the attack plan. Then the Warriors took position and hit The Road.

Light artillery provoked the slumbering Highway with electric bullets. The Beast shook and shuddered, rearing up like a flat black cobra.

Bob joined the second gunnery team, laying down quick surgical strikes of germ grenades and sulfur shells every hundred yards.The attacks were effective and the Road writhed in agony, whipping furiously from side to side.

Frantically, it stomped on the members of a mechanized unit, stealing their matter to repair its wounds.

Nix swore and called for a heavy artillery strike. Radium rockets ripped into The Highway as explosions wracked its surface.

Wave after wave of special units roared up and down the ten mile stretch of Interstate, systematically assaulting it with a variety of weapons.

For the better part of the day, the Road Killers exhausted themselves on The Highway. Then Bob discovered that using bacteria bombs and germ grenades together created a self perpetuating parasite that infected the Road and impeded its healing ability. This knowledge helped turn the tide of the battle and finally brought down I-95.

Their wounded were many, but the casualties were few.

And Broadway Bob proved himself that day.

Exhausted yet content, he leaned against a tree and lit a cigarette.He saw Annie Domini Nix and gave her a weary nod.

“You did alright today,” she said. “We might be able to use you after all.”

“Thanks, “said Bob. “Any advice for an up-and-coming Road Warrior?”

“Yeah,” she said. “Stay off The Streets and out of trouble.” 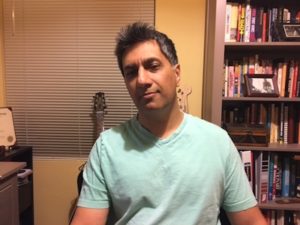 Shu Mookerjee is an IT Consultant by day and a semi-pro guitarist at night. In between, he writes speculative fiction based on his love of video games, action movies and puns of questionable taste. He has a degree in mechanical engineering and a blue belt in Kung Fu. Shu lives in Dallas, TX with his wife Shannon, who wishes he would get a hobby.