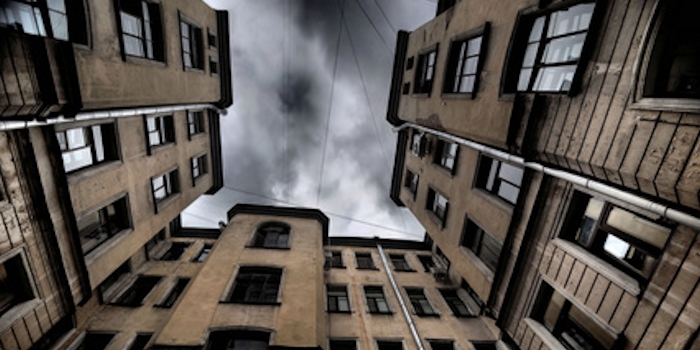 Fear #7 has occurred to me, and it is unspeakable.

It slipped in through an unguarded moment, vinegar and bloody-iron across the tongue. Even though I know it’s not real, like the six manifestations before it, I can’t stop myself from responding as if it is.

Spiro Durante is the source. Garner & Fitch bought his building, a century-old, ten-story slide zone. It’s the last piece of a redevelopment puzzle that’s cost me nights, weekends, my kid’s attention, my wife’s affections. Sleeping alone on the sofa with the wool cushions was going to be worth it. They’d make me a partner. I’d swim in coins like Scrooge McDuck. Enough money to soothe the kid’s bent soul, to mend marital fences—or survive tearing them out.

Except for Durante in the penthouse, not one tenant pushed back. They took buyouts like they came with free groceries. I didn’t gather until later: they didn’t so much want out of their homes as they wanted away from him.

Fitch sent me in when the third offer letter ‘refused by addressee’ returned in the mailbag. “Scrape him off like a tick,” Fitch said. I’d done it before. Holdouts in the Greenscape corridor, pension widows rooted in crumbling rooms. So I went.

Durante met me at the door before I could ring, like he knew. Things from four corners of seven continents were crammed into the penthouse. It could have been the world’s attic. Sunlight through grimy windows laid a sepia patina over everything. He’d been the tenant as far back as we could find records, but didn’t look a day over forty, except for his eyes. Green, the color of a swamp swallowing logs. Something ancient crouched behind them. It had cut the straight-razor smile in his face. I could smell it, poison in a flesh suit. Waiting. Wanting.

I understood the eagerness of the other tenants. I refused coffee or tea. I wanted to present the offer and get out. Came on strong. Told him we’d have the cops drag him out, demo the place with all his knick-knacks inside. Intimidation. Menace. He was a pothole that needed paving.

He pushed the deal back, unread. “I will decide when I move on.”

“We don’t have to offer you anything. Your lease was severed with the sale. This is generosity for your inconvenience.”

“Let me explain generosity.” He motioned with his left hand, a slow sign language. The garnet ring on his finger seemed to flicker. “Seven fears will occur to you and your masters. New fears. Things you’ve never before given a second thought. Things that will consume you from within. And then I will move on.”

His laughter rumbled from an ancient grave. “You mistake a guarantee.”

I called the office on my way out, set eviction wheels in motion.

That night was the spider. I’ve never been afraid of them. One as big as my torso slid from under the couch, mossy green lines on its slick, black body. Tree-limb legs. In the shadows, heart pounding, I beat it down with a chair. It died screeching. But when I turned on the lights, it was a quarter-sized spot mangled under a broken chair. The wife thought I’d snapped. But the kid saw, mentioned the weird green lines on its tiny, broken body. On some level, it had happened.

Fears blossomed one after another over the next four days. Fear of falling, my office floor collapsed into a chasm, ring of green fire at the bottom. I screamed and clutched the desk until Maggie came in to check on me, crossed the same floor the office always had. Fear of darkness, seeping into the subway car from the tunnel. Monstrosities within writhed and snapped at me before the train returned to the surface, other riders recoiling from what they believed a fit. Fear of strangers, in the form of a scrawny homeless man who rattled and grew into a muscled hulk with a club when I refused him change. Fear of dogs, a pack with green eyes and rotten meat on their breath that cornered me in the park. Except they were three leashed terriers, their confused owner trying to understand my shouts.

I fared better than Garner. Three days after Durante’s glamour, the old man screamed “I’m sorry!” at no one and threw himself twenty stories to the sidewalk. Fitch was babbling about nuclear war when they buckled him in a wrap-around jacket and called Bellevue.

In their absence, I got the damned job done. Cops followed me to Durante’s door, court order in hand. The penthouse was empty save for an index card tacked to the fireplace mantle. Block letters. OUR REVELS ARE ENDED. Then the police discussed whether to shoot me and leave me for the rats, or to devour me themselves. I ran. They called after me, confused.

When I got home, the wife was at her book club. I popped a beer and tussled the kid’s hair. He set out with his friend, Donnie, to the market Donnie’s father ran a few blocks away. Choice cuts, cured meats. I wondered what the kid got out of the place. That’s when Fear #7 occurred.

It’s coming up the elevator soon. Dull cleaver, rusted bone saw, crooked steel pins. Other bits. My son. But it won’t be my son. It isn’t eleven, doesn’t want me to work less or go to Little League games. It will wear my boy’s body, a hint of Spiro Durante green in its eyes. When it arrives, it will gnash and snarl, chop and slice. It will only be my son again when it’s dead.

But I’m not afraid of him. I’m afraid of myself. Fear #7 is what I will do to my son to survive. And it is unspeakable. 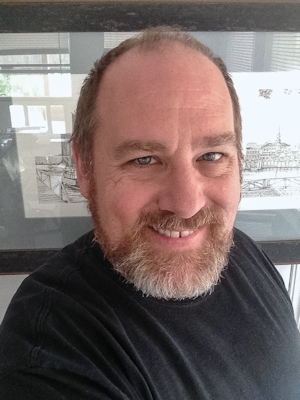 Doug Lane’s fiction has appeared in publications including Abyss & Apex, The Saturday Evening Post, Beyond Imagination and Sugar & Rice. He writes in the back room of a craftsman bungalow in Houston, TX where he lives with his wife and their feline overlord. You can find him on Facebook as Doug Lane Writes. Interesting trades entertained.