Fiction: “A Little Adventure”
by Stefan A. Slater 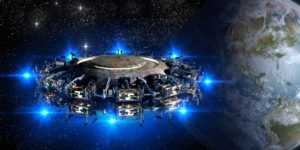 When the ships like hovering nightmares appeared over our cities, their three-mile-wide hulls dripping with pure-blue lightning, the creatures made their demands known. They tapped into every audio and visual output in the world, calling forward six particular delegates of the human race to answer a rather complicated question: Why should we not obliterate humanity?

“Well, that’s a great question,” said the lead delegate to the creatures.

The delegates—men and women, the sharpest of the sharp—stood before the Countless within the flagship. Though the exterior shone like polished silver, the ship’s interior was populated with shadows which, when seen from the corner of your eye, seemed to skitter and scurry in circles like panicked roaches underfoot.

A thousand creatures filled a damp hall, twitching and snarling, dragging arms tipped with claws, each creature fidgeting and stretching out their six limbs until the spaces in between their shells popped and cracked. They called themselves the Countless (that wasn’t their real name, of course, but their actual name was so long it stretched on and on until at least next Tuesday, and the creatures figured a short, one-word title had a nice menacing ring to it) and when they spoke, they did so in unison, their leech-like mouths moving in sync, their words sounding like boulders crumbling to dust.

“We are the World Breakers,” the Countless interrupted, swaying their arms with each letter, claws digging into the slimy floor. “We break worlds that offer nothing of value to us, and if you offer nothing worthwhile, we will break you too.”

One of the delegates, a military specialist, felt inclined to say something about mankind’s martial prowess, but a flash of electricity struck him down before he could speak, turning him to ash.

The delegates, eyes wide and mouths gaping, stared at the Countless.

“We thought he was going to interrupt us,” the Countless said. They droned on, informing the delegates that, in order to prevent mankind’s end (which would take, by their estimates, roughly an afternoon or so), the delegates needed to offer tribute—a gift from humanity, something unique to Earth, something no other world had offered before.

The other surviving delegates cleared their throats and studied their shoes intently, so the lead delegate adjusted his tie, and spoke as if he was breathing his last (he probably was).

He spoke of microprocessors, the power of the atom, engineered microorganisms, nanotechnology, robotics and classical artwork. He spoke of mankind’s ferocity, inventiveness, love and our knack for exploration. He was rolling along with the finer points regarding genetic experimentation and cloning, and how all of mankind’s scientific discoveries could be shared with the Countless, when the thousand creatures looked towards the back of the hall simultaneously, lifted their right claws, and said, “Who’s that?”

The delegates turned. There was a girl standing up against a far wall, closest to the lift that had brought the delegates up to the ship. She was pressing her back up against the wall, doing her best to make herself as flat as humanly possible.

The lead delegate went pale. “Oh. She was supposed to stay in the lift.”

The Countless cocked their heads. “What’s an intern?”

“Ah… well, it’s hard to explain. She schedules appointments, takes calls… Well, it has something to do with school credit—”

“She has not offered anything yet,” the Countless said. “Let her speak.” They motioned her forward.

The delegate thought about protesting, but then he caught a whiff of ozone and saw the military specialist’s ashes swirling at his feet, so he quickly quieted down.

The intern, who held up her nametag (Elle) to the Countless and did her best to make sure her hands weren’t shaking too much, asked if the Countless had liked what her boss had offered.

“Not particularly,” the Countless said. “Nothing new.”

Elle shifted from foot to foot, glanced back at her boss (who was hiding his face in his hands). She cracked her knuckles, took a breath, and raised a finger to make a point… but she paused. Then the corners of her lips turned up into a smile.

“How many Countless are there?”

The Countless thought their name was pretty self-explanatory, but they answered anyway. “Many. Billions upon billions.”

“And you all speak and think in unison?”

“Yes,” they said, their shared answer echoing in the hall.

“So you act as a collective? Not a single individual among you?”

The creatures hissed. “What’s your point?”

Elle crossed her arms. “Do you have stories? Stories of your race?”

The creatures shrugged. “Of course.”

“But do you have stories about… individuals? You know… individual Countless? Heroes and the like.”

The Countless paused, thinking. As far as they knew, there wasn’t a single story about one, solitary Countless soldier, scientist, or harvester. Not one.

“So, that’s a no, I take it?” she said, looking about the hall. “Well, here on Earth, we love stories about lone individuals. Heroes. Every single person dreams of having epic adventures on their own. Total freedom and the like. That’s why we read stories, like Tales of the Wasteland: The Lone Wanderer by Susan Yucker. Happens to be my favorite book.”

The creatures narrowed their eyes. Elle’s boss began to sob.

“What’s it about?” the Countless asked.

Elle smiled. The book was about a ‘lone wanderer,’ she explained, who had wild adventures throughout a violent and terrible wasteland. “He battles monsters. Explores forgotten skyscrapers for food. Ventures into the deepest caves to find lost technology. Stops invading cannibal armies with only his wits. He does whatever he likes, whenever he wants, completely on his own,” she said.

The Countless twitched. Then they spoke. “So… he never takes orders? He isn’t joined with… others?”

“Oh, sometimes he has friends who come with him, but only when he wants the company. He does whatever he wants. No other creature can influence him at all. He’s his own man. He alone decides if he’s good or bad—no one else tells him what to do. Great stuff, right? I actually have the book with me.”

She pulled out a paperback from her back pocket, and left it on the floor.

The Countless eyed the book suspiciously, almost as if it might suddenly begin to tick or release noxious fumes. “We’ll review the gift. Leave us.”

A few days later, the Countless demanded every copy of Tales of the Wasteland: The Lone Wanderer.

They also asked for the movie tie-in, too.

After a week, the ships left, each flying in a different direction.

They broadcast a single message.

The creatures no longer spoke in unison. They were a disjointed bundle of voices, but from what the world’s top scientists could surmise, it sounded like each creature had decided to pursue its own desires and wishes—that each one wanted a unique adventure, to decide its fate individually. Breaking planets had become dull—it’s all the Countless ever did. For once, each wanted to find something new to do. A little adventure for each and every Countless.

Each, in the end, wanted a new story. And they flew away, never to be seen again.

Well, save for one ship, which did stay a little while longer. The Countless onboard kept asking the same questions, the words pouring from every computer, smartphone or TV on Earth for a full week: Where was the sequel to The Lone Wanderer?

And when could they get a few billion copies? 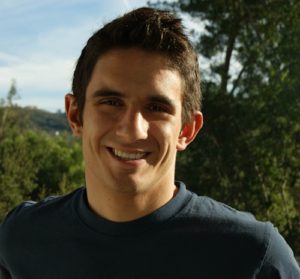 Stefan A. Slater is a freelance writer from Los Angeles. His fiction has appeared in Betwixt Magazine. Follow him on Twitter @StefanASlater or visit his website stefanaslater.com and drop him a line.

One Response to Fiction: “A Little Adventure”
by Stefan A. Slater