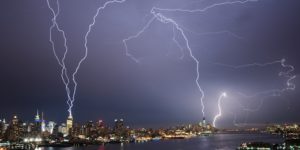 Pen and paper are all I have left. The sky split in half six weeks ago, and since it did, New York has been in the dark. No electronic devices, no electricity of any kind.

Do they have thunder beings in Boston? Do they stomp around your mother’s street? I guess I already know the answer, but still I feel compelled to ask. Do they have never-ending hurricanes? Do they have the dance?

You’ll never read this letter. I’ll write it out, and then I’ll cry over it with a bottle of looted Bacardi, and then stuff it in my sock drawer with the others. You always asked me to tell you the wildest stories when you were little. Here’s one for you. Here’s one the entire world wasn’t ready for.

September 16th, 2:29 in the morning. That was the instant the clocks stopped. I was lying down to sleep. Tired, spent, long day at the office. I reached over to flick off the light and…

The lights went out. Not just for me. For everyone everywhere in the city. The sky opened up—a deep, crashing roll and rumble—and then the hurricane winds came smashing against my windows. A bolt of lightning hurled itself downward, charred the air, slammed headlong into Central Park. It flattened trees, lit them on fire. It left a crater the size of a house.

The bolt rebounded from the impact, leapt skyward. It popped and frayed, grew arms, legs, a head, and it pirouetted in the sky, and did a somersault, and then the bolt of lightning, it spoke to the city.

And New York listened. How could we not? The voice played across smartphones and televisions and laptops and even the little wall speakers people use to buzz apartment dwellers.

This being of light, this being of thunder, it slammed back to Earth. It took hold of its mighty chest, and it pulled away electric skin, and laughed and chortled from the pain. It threw out its arms, and skin flew away, shook out its legs, and its skeleton was bare. I swear to you, dearest Angelica. Its electric skeleton threw fingers of light, slinking juice writhing from rib to rib, wrapping round radius bones, slipping over and through the jaw, to the skull, to two wretched, wreathed eyes of deepest, startling blue.

“New York City!” it said. “I’m here to dance with my lady! You may call us gods. You may! You may worship us in whatever way seems best. But tonight we dance!”

And as the thunder being spoke this final word, dance, a second bolt of lightning reached down from the heavens and slammed against Central Park’s Great Lawn and lit an acre of grass on fire. It spread itself out, yellow, taut tendrils twirling. It drew up, grew limbs, grew hips, grew great, bouncing breasts. It spotted the blue skeleton thunder being, and then it giggled, deep and rumbling, brassy enough to rattle my windows.

Blue danced with Yellow, then. Spinning and twisting and sparking against each other. Wild, exploding, ebullient fireworks. The vivid, delirious colors of a fever dream. He threw her high, and her crackling dress flashed and gleamed. The rain came down by the bucketful. Streets were awash from Harlem to Midtown. Flooding subways, burst retaining walls, power stations exploding in the night.

When they were finished, when the thunder beings had danced their dance, their chests heaved with electric exhaustion. Blue lay Yellow on her back, gently, right there atop the Imagine emblem of Lennon’s Strawberry Fields, and he kissed her softly on the lips, and then he slid himself between her thighs and he…

You know something, Angelica, my dear? Even though you’ll never read this, you’re still too young to know the details. Suffice it to say, very soon the thunder beings slept, there beneath the hurricane rains, silent, still, and content.

As morning approached, I and a few dozen others in my building ventured outside, parkas wrapped tightly around our bodies, never letting eighty-mile-an-hour gusts knock us off our feet. We made it down to Central Park, to a crowd of thousands. We vied for spots to watch them sleep, these thunder beings, these gods of light. Blue was the first to awaken. He yawned and melted the sidewalk with his breath. The crowd cried out. He simply chuckled and sat up. I tell you, he was twelve stories tall if he was a foot. Finger bones wrapped placidly around a smoldering tree trunk.

“Wake up, my dear,” he cooed, “the little ones are watching us.”

Lady Yellow awoke, and she batted her eyelashes. Her flickering cheeks reddened at the sight of us.

“You know?” said Blue. “I think we like it here. I want another dance. I want to make love a thousand more times here in this city.”

And he said he would, and each night for six weeks, that’s exactly what he’s done.

It’s funny, isn’t it? The stories we tell ourselves? I guess I’m just trying to relive better days. Oh, they’re not lies, Angelica. Not really. What would you rather I say? There’s no such thing as thunder beings? Humanity has truly mucked things up? Super storms every week now? New York City and the entire Eastern Sea Board decimated?

No, I like skeleton Blue and lady Yellow better. And I like the idea you’re still out there, with your mother, safe from all this mayhem and death. I love you, my dearest Angelica. I always have. I always will. Every day the same, every day the same. Even now I can hear them. Doing the Two-Step down in Central Park. I can hear Blue dancing with Yellow.

Jeff Bowles’ work has appeared in some of the nation’s top magazines and anthologies like Nashville Review, Stupefying Stories, the Threepenny Review, and Spark: a Creative Anthology. He earned his Master of Fine Arts degree in Creative Writing at Western State Colorado University. Jeff currently lives in Southern Colorado where he dreams strange dreams.

4 Responses to Fiction: “Blue Dancing with Yellow”
by Jeff Bowles