Marc hadn’t realized the time jump would cause vertigo. Great. Another glitch that would make potential investors run for the hills. He materialized in the bathroom stall and almost lost his balance. He hunched on top of the toilet so he wouldn’t be seen.

A little boy’s voice from thirty years ago stammered outside the stall. “Hi, Brian.”

Marc would never forget the voice of Brian Thompson, the bully of Horace Mann Elementary. Even a lifetime later it made him sweat.

Marc wondered the same thing he had as a child. Why were there never adults to stop people like Brian? It was as if school bully was a job, like custodian or librarian.

Brian jumped back. “What do you want?”

After waiting so long to get back at his tormentor, Marc thought he might feel anger or joy. He never suspected disappointment. Brian was just a skinny eleven year old with bad acne. He wore a filthy Marlboro T-shirt, the kind that came free in a carton.

Brian took his hand off the younger boy. “Sure, mister.”

The boy Marcus stared at his older self. “Who are you?”

Marc yearned to tell his younger self so much, but he didn’t want to change things more than he already had. “A friend, Marcus.”

Marc smiled. “Everything’s going to be okay, son.” He pulled out his Plasmatech 3000. “Brian. I’m going to knock you out with this gun.”

“I’m not going to hurt you.” Marc pointed to his younger self. “When this boy walks out of here, everyone will think he beat you up.”

Brian was sweating. “Grownups aren’t allowed at school without permission. You’ll be in trouble, mister.”

Marc shook his head. “No one will see me. I’ll disappear back to the future. And if you bother this young man again, I’ll find you. I’ll pop onto the school bus or into your kitchen or anywhere. Understand?”

Brian started to cry. “What did I do?”

Marc just wanted the conversation to end. “You beat me up.”

The bully wiped his nose with his sleeve. “I didn’t do nothing to you.”

Brian now just looked pathetic. Marc tucked the weapon back in his jacket. He couldn’t do to Brian what the bully had done to him many years ago.

There had to be a better solution.

Marc leaned against the sink. “Look, Brian, can you tell me what’s going on with you?”

¤
Marc materialized in the galley kitchen of a dingy double-wide. Brian’s Dad, an overweight man with bloodshot eyes, dropped a Coors. “Where the hell did you come from?”

Marc opened the fridge and vaporized a couple of beers with the Plasmatech. He noticed several college accounting books on the counter. “The drinking stops.”

The man wore a light blue Superlube employee shirt with Roy embroidered above the pocket. He studied Marc’s weapon. Maybe he was too drunk to be scared. His voice slurred. “Plasmatech 3000? What’s that?”

“Never mind what it is.” Marc pointed the gun at the stack of textbooks. “Those yours?”

Roy shrugged. “That was a long time ago. Things didn’t work out.”

“Make it work out. Go back to school.” Marc exhaled. “And stop hitting your son.”

Marc stepped forward and his foot slid on the puddle of beer on the grimy linoleum. He reached to the counter for support, but grabbed an old pizza box by mistake. He fell flat on his back.

He looked up to see Roy pointing the gun at him. The weapon was pretty easy to use. Hell, that would be its selling point in thirty years, but Roy might need some time to figure it out.

Marc hit the return toggle in his pocket and rocketed back to the future.

He popped up behind Roy a moment later. Roy was staring at a smoking hole in the dishwasher.

Marc got Roy in a sleeper hold. “Put down the gun.”

Marc tightened the hold around Roy’s neck and Roy put the gun on the counter.

Marc grabbed the gun. “I’ll keep coming back if you don’t start living right. And, I can be anywhere.”

Marc vanished before Roy could say anything.

¤
Marc’s head throbbed from the time jump. He took a bottle of Tylenol from his desk and swallowed a couple of tablets.

Curious to see what happened to Brian, he opened his laptop. Or maybe his time would be better spent looking for a venture capitalist before his landlord evicted him.

Somebody rapped on the door to the garage.

He opened the door and stared into the wrinkled face of Brian Thompson’s dad. He looked to be about seventy.

“Been a while.” Roy smiled. “I want to fund your company. Say, fifty million dollars, and you’ll have controlling interest.”

“I guess that’s payback for your little visit. At first I figured I’d dreamed the whole thing. But I’ve been sober for almost thirty years now.”

“What happened to Brian?” Marc asked.

“He’s doing great, thanks to you.” Roy wiped away a tear. “He’s a lit professor at UNC. Pretty smart kid. All he needed was for his Dad to give him a chance.”

“Looks like you did pretty well too, if you’ve got fifty million dollars,” Marc said.

Roy smiled. “I got the greatest stock tip ever. Invested all my money in Plasmatech when it was just two kids working out of their dorm room.” He surveyed Marc’s cluttered lab. “Sort of like your setup here. I think you’ll do pretty well, too.”

Peter Wood is an attorney in Raleigh, North Carolina, where he lives with his patient wife and surly cat. His stories have been published in Daily Science Fiction, Asimov’s, and Stupefying Stories. His first appearance in our pages was “Mission Accomplished” in the now out-of-print August 2012 issue. Since then, we’ve had the privilege to publish “Timeless Bore” in SHOWCASE #5, “Special Delivery” in SHOWCASE #12, “The Aliens Went Down to Georgia” in the March 2015 issue, and “Stingray” in SHOWCASE. We would have published “Academic Circles,” too, but Asimov’s got it first, darn it. 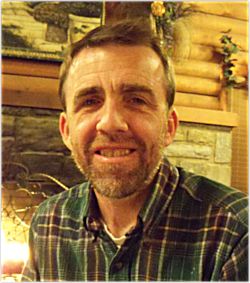