OCTOBER, WHAT A MONTH. People in this world are so fascinated with their “holidays” that they set aside any remaining good sense and judgment they have to allow for fun and festivities. Fools. They make the tasks of the underworld disgustingly easy, even more so than in the days of the plague in the Dark Ages, when strange deaths were a part of everyday life. The beast is hungry. He knows it’s time to feed, and these fools are ripe and waiting to be plucked from the vine.

We invented this holiday all those years ago so these simpletons would let us walk among them without fear or worry, at least for a part of the year. Now they celebrate us, pretend to be us, even come to us looking for a bit of “Halloween fun” and ask us to read fortunes or cast spells, looking for magic potions to fix their miserable, broken lives. They might as well throw themselves in the beast’s bowl and lather on the gravy.

Preparations for the feeding were behind schedule this year, as some ingredients are becoming harder to acquire with the ever-dwindling population of the local covens, and an increasing number of amateur “witches” buying things they have no business touching. But my struggles are of little importance; the beast will hear no excuses. I must appease his hunger.

I can smell them before they even get to the door: sweet, young, flirtatious. I can almost feel the beast salivating on the back of my neck with anticipation. Two giggling blonde teens clutched to the arms of what seems to be an animated mountain of pride and self-indulgence wrapped tightly in a varsity jacket. Ogres knock with more grace than this one. His face fills with an expression of pure superiority as he looks at me in the doorway. He stinks of wealth, the finest corrupter of souls this plane has ever known.

The girls want their fortunes read, same as most of the teens who come through my door. It’s easy to ramble off some nonsense about the amazing and exciting things that will happen to them in the future when they’re rich and famous. It’s exactly what they want to hear. I bait the hook, making sure to mention “wildest fantasies” coming true, and now he’s all ears, too. High school boys; it’s almost too easy. Not two minutes later he’s asking for an aphrodisiac potion, something to help those fantasies come true. The girls blush, but they don’t stop him. Too easy.

I dip behind the curtain and draw a fresh vial of the smoky, purple elixir. I charge him a hundred bucks for good measure and send them on their way, off to indulge in fantasy. I can almost see the beast’s fanged grin through the mist outside.

He’ll enjoy this snack. That’s all kids like this could ever be; a simple snack. They were too easy, nearly his already, tainted, just this side of irreparably corrupted. He craves purity; to devour something clean and pure, that’s what satiates this hunger of his.

In the early years I struggled with providing innocents, instead stuffing the beast with scores of tainted flesh, one morsel at a time, filling his belly bit by bit. It’s easier to offer up those who walk so willingly in, feels almost like I am providing a service by offering them, purging society. Innocents though, it only takes one to satisfy his hunger, just one. One pure sacrifice to keep the beast at bay seems like such a small burden. At least, that’s what I tell myself when I’m staring down my reflection in the bottom of a bottle.

Four hundred and seventeen years and it hasn’t gotten any easier. I have to leave my conscience behind, become hard and uncaring. I have to allow myself to become the beast. Some years it takes weeks to push past the remorse of destroying innocence, but I do it, nearly every year, I do it. There have only been a handful of years in recent memory that I have let the beast gorge himself on scores of the corrupted rather than a single innocent, but it does happen.

It’s after midnight when I make my way out of my shop and through the streets of town, seeking out more snacks for the beast. The local bars are crawling with filth: scum so far past corruption that even the beast won’t accept them as payment. I do find a few, a few who are just starting down the road to destruction. It’s unsettling how simple it is to slip a few drops of elixir in their drink without anyone noticing. Four more for the beast, but I know it’s not nearly enough.

My ingredient troubles have set me back further than I realized. I let the calendar slip away while I was lost in the hazy lands between books and bottles. All Hallows’ Eve, and my deadline, are fast approaching. He needs to feed. I need an innocent.

She walked right through my front door two days later and stole the breath from my lungs with a single glance.

Standing before me was my angel, my sweet departed daughter, Rachel, the one I lost to the darkness five years before I made my deal with the beast. The reason I made my deal, so I could live on until I could find a way to return her to our world, to hold her once again, to watch her grow, and live the life she should have had then.

I tell myself this can’t be my Rachel, convince myself it is simply my eyes playing tricks on me, deceiving me, it can’t be her.

It has to be her. There is no other way. I could live another thousand years and I would never forget those eyes; sparkling, icy grey, absolutely mesmerizing. Rachel’s eyes, those could only be Rachel’s eyes.

The girl’s mother walks in behind her, her body present, her mind clearly elsewhere. She bears the unmistakable mark of a woman completely devastated by a loss she will never truly recover from.

The girl has such deep, lamenting sadness in her eyes that I can hardly look at her, yet it’s impossible to turn away. I can’t bear to see that pain, not in those eyes, not in Rachel’s eyes. Why did it have to be her?

She hands herself to me on a silver platter. She tells me that she lost her father the week before in a terrible accident, and all she wants is to see him one last time, so she can say goodbye, tell him she loves him, one last time. She wants a spell, a potion, some magic that can do what everyone told her is impossible, what her brain tells her is impossible, but her heart refuses to believe. She just wants to say goodbye.

I know what she wants all too well.

Here she is, my innocent, offering herself to me, to the beast.

We can help her. We can take away her pain.

I slip through the back curtain and return holding a vial of crystal clear elixir, shimmering every so slightly in the light from the candles. I tell her to drink half and give the other half to her mother when they are both together, safe in their home. I don’t charge them. A smile of hope peaks through those watery, grey eyes as she says “Thank you” and walks out the front door, her mother’s hand held tight in one hand, the vial clenched in the other.

Rachel’s smile, all these years later it still pierces me, knocks me to my knees in a flood of emotion.

I lock up my shop a few moments after she leaves and head to a nearby cliff overlooking the ocean. Rachel used to love sitting on this cliff, looking out over the waves with wonder in those beautiful grey eyes. This cliff, more than any other place on Earth, has given me comfort over these long, lonely years.

I wait, watching waves crash against the rocky shore, taking in the light of the moon. I know it won’t be long now. I can sense him nearby. My time is up.

The beast’s claws bite into my flesh as he lunges from the shadows, full of fury and rage at my failure, my deception. I don’t fight him, don’t struggle. I don’t even scream. As he tears me back into his shadowy world, ripping my being apart, I look back at my body one last time, see it standing there, completely undamaged for a brief moment before it crumbles to ash.

The beast drags my soul down into the depths of his lair, down where I will have four hundred and seventeen years, and countless souls to answer to. Down to where I know there is absolutely no hope of ever seeing Rachel again.

I smile now as I think about the elixir I gave her. It will give her one last minute with her father’s image, one moment to say goodbye, and then it will shroud her soul from the beast for all eternity. I hope that one moment is enough for her. Not until this very last moment has a single moment ever been enough for me.

My final act, my final goodbye to Rachel, was this tiny vial to a broken angel.

At least I got to see her smile, one last time. 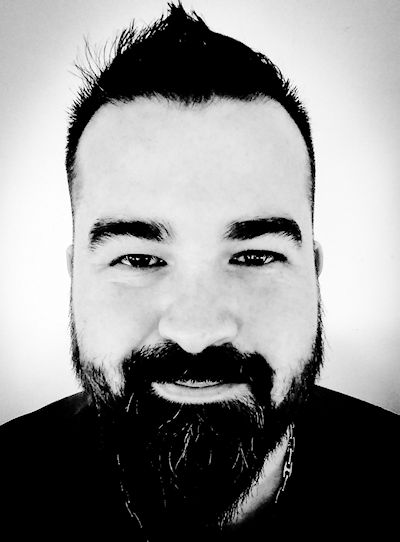 J.L. Phoenix is a lifelong lover of the fantasy realms who spends his days buried in technology (dreary day job stuff), his family (his reason for being), role playing games, or literature (reading and writing). He also enjoys leisurely drives to take in the beautiful Michigan scenery as inspiration.

3 Responses to Fiction: “The Beast” by J. L. Phoenix