Fiction: “Under the Shimmering Lights” by Jamie Lackey 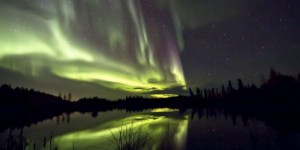 Kirima’s ice skates hissed as she glided across her frozen pond. Four smooth strokes, then three crossovers, her left foot over her right, then four more strokes. Her skates left gouges and a trail of ice shavings. Her hair clung to her temples, and her breath misted in the cold air.

She hated the cold and the short hours of thin gray sunlight. As a child, she’d dreamed of hot winds and brown mountains and regularly spaced days and nights.

But she had always loved the dancing lights, and she came home when her grandmother wrote to beg her to save them.

She accelerated. The sharp edges of her skates dug into the ice, and for a second, it felt easy. She flew, free in her normally-clumsy body, balanced perfectly on one thin blade. Joy fluttered in her belly.

On the next turn, her skate caught on the worn ice. Her ankle twisted, then she stumbled, fell, slid across the ice, and ended up in a crumpled heap. The cold seeped through her fur-lined pants. Her joy shattered into despair.

Kirima would never be able to carry the crystalline eggs to rekindle the fading lights. She would fall and crush them. She would fail.

But she was the only one left to even try. She picked herself up and skated.

She stopped when she could no longer feel her fingers. She sat on the frozen snow and fumbled with her laces. Her fingers were clumsy, and her bruised hips ached. She winced as she slipped her feet into her cold shoes and limped to her shack. Her ankles felt shaky without the skate’s support, and the left was swollen again.

Inside, she stirred her fire and boiled water for tea. She scraped frozen honey into her earthenware mug and threw in a small handful of dried flower petals. When she added water, the steam smelled like spring.

Her grandmother had been gone when she arrived, but the coals still glowed in the hearth, banked around the three precious eggs, each no bigger than her thumb.

Kirima turned the eggs. They burned the tips of her fingers and painted the tiny room with pink, blue, and green light, just like the lights that had once danced in the sky. “I’m almost ready,” she whispered. “I only fell once today, and it was because of rough ice.”

She strapped her snowshoes on and tromped across the snowy field. A white hare huddled in her trap. She sank her fingers into its thick fur. Its frantic heart thudded under her fingers, and its eyes shone with fear. She broke its neck with a sharp twist and carried it back home.

She skinned the rabbit. As the scent of roasted meat filled the drafty room, she gathered snow and packed it around her swollen ankle. She curled on her bed to sew the uncured rabbit hide into a pouch with her bone needle. Maybe with the soft fur padding them, they’d be able survive if she fell.

The days were growing short—down to a handful of hours of thin sunlight—and she didn’t want to attempt the trip in darkness.

When the snow on her ankle melted, she wrapped it tight and edged close to the fire. Smoke curled around her, and she slept bathed in the eggs’ rainbow glow.

The cold woke her. Sharp pain spiked up her leg when she put weight on it, and her ankle was hot and swollen.

“I should get some more snow and stay off of it,” she told the eggs. “I won’t be able to practice today.”

Their glow seemed dim in the morning light.

Her ankle still ached two days later, but she didn’t want to wait any longer. She imagined her grandmother’s dark eyes, her twisted frown, her sharp disapproval and the muttered word, “Excuses.”

“Maybe she was right about me,” Kirima told the eggs. “Maybe I don’t try because I am afraid of failure. But you should fear my failure, too.”

She boiled the hare’s bones in melted snow and drank the thin broth down. She heated all of her remaining honey. It was thick in her throat, and filled her with warm energy. She tucked the eggs into their fur pouch then slipped that into her anorak, just over her heart. She laced her skates tight, tied her hood close around her face, and set out toward the northern horizon.

She glided across the long ice. She concentrated on her balance, on every line and angle of her body. White ice stretched ahead of her, fading into the gray sky. The wind whispered in the distance, and her skates hissed.

As she moved, heat spread through her muscles. The pain in her ankle faded to a dull ache. Sweat beaded on her back and under her arms.

The gray horizon darkened, and the wind shifted.

“Oh no,” Kirima whispered, but she skated into the storm. Stinging snow pelted down from the sky and pressed cold kisses against her exposed skin.

Her grandmother would have smelled the storm coming, but Kirima had refused to learn her ways.

Her world narrowed. She tucked her chin to her chest and skated. The cold clawed through her clothing, and exhaustion weighed at her muscles.

She could hear her grandmother’s disappointment in the wind, but the eggs were warm over her heart.

She couldn’t feel her feet.

She would save the only thing she loved in this frozen wasteland. She would not fail.

Darkness spread across the ice.

She wondered why her grandmother had left without saying goodbye.

Weak green light flickered through the storm ahead. She turned toward it, numb to any feeling of accomplishment.

The wind slapped against her face. Her balance faltered, and she flailed wildly, desperate to keep her feet. She planted both skates on the ice and bent her knees.

Her momentum carried her to her destination. A faint coil of light curled, limp and still, around a jagged black rock that thrust up from the ice. She’d reached the heart of the ice.

She pressed her palm to the light, and it wrapped itself around Kirima’s wrist.

She pulled the first egg out of the fur-lined pouch. It was still warm against her palm, and it painted the snowflakes blue.

A blue wisp burst out of the egg and flowed up Kirima’s body. It joined with the green coil. She pulled out the pink egg, and it hatched and followed its brother. The light grew, stretched beyond the stone’s deep shadow.

She pulled out the final egg. It was cool, and its glow stuttered like a heartbeat.

Kirima held it close to and breathed on it, willing her warmth into its thin, fragile shell. “I got you here. Now it’s your turn,” she whispered. “You can do it.”

The green wisp burst free and joined with the coil. Light exploded across the sky. They pushed the storm clouds away, and stars twinkled behind them.

Three wisps trailed down and caressed her cheek. Warmth spread from their touch. The pink and blue floated away, but the green lingered. It wrapped around her ankle, and the pain faded.

She skated back home under the shimmering lights, and joy danced in her belly. 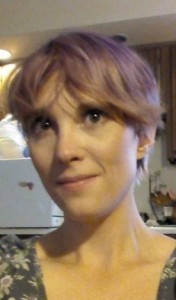 Jamie Lackey lives in Pittsburgh with her husband and cat. Her fiction has appeared in Daily Science Fiction, Beneath Ceaseless Skies, and the Stoker Award-winning After Death... She’s a member of the Science Fiction and Fantasy Writers of America. Her short story collection, One Revolution, is available on Amazon.com. Find her online at www.jamielackey.com.