Fiction: “Bottoms Up” by Gary Cuba 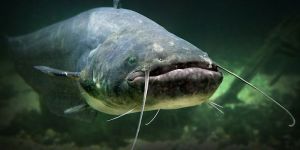 Jimmy Sledge pulled his ‘85 Ford pickup into the parking lot of the Double-T Diner and, exercising a modicum of decency to the patrons inside, paused at the entrance to fart loudly. Satisfied, he pushed through the door, hitched up his worn blue jeans, and sat down on a cracked vinyl-covered bench seat at the booth already claimed by his two best friends.

He could barely squeeze his massive belly behind the edge of the fixed table in the booth; given the inexorable course of organic events, someday soon they’d all have to gravitate to a regular table with chairs.

“And here’s Jimmy,” his buddy Clem said from across the booth. “Been waiting on you, boy. You look a tad saturated—which seems unusual, since it ain’t raining today.”

Jimmy gave his order to Tallulah Jane, the waitress on duty that day. “Fishin’ accident,” he murmured.

Bert, the old boy sitting next to Clem, chuckled. “We know all about them ‘accidents,’ Jimmy. Got too drunk whilst fishin’ and fell out of your johnboat again, eh?”

Jimmy sighed. “T’weren’t quite like that, Bert. Not to dispute that hasn’t happened to me oncet or twice ‘afore, but this particular incident here were different.”

He pulled a can of beer from a pocket of his fatigue jacket; he’d put the can inside a small brown paper bag for purposes of general public decorum. Jimmy took a powerful slug from it, his hand trembling noticeably as he did so.

“Fact is,” he said, “we’re always carrying on about the big one what got away. Y’all know I been trying for that monster catfish down at the bottom of my secret fishing spot for years now—the one I call ‘Ebeneezer,’ owing to how he’s so greedy and feisty. I’d nabbed him a couple of times, even had him in my boat oncet. But he always got away. Thirty pounds, if’n he’s an ounce. He’s got him more hooks sticking through his fat old lips than any three of those durned pierced youngsters you see strutting around town these days.

“And no, Bert. I seen you raising your eyebrows when I mentioned my ‘secret spot.’ Sorry, boys, but that’s a place only God and me and my coondog Horace know about. And that’s the way it’ll stay!”

Bert and Clem grunted and nodded their heads knowingly. They each had their own secret fishing holes, and so they both knew perfectly well where Jimmy was coming from.

“Anyways, I knowed something were odd when I drove up to the edge of the pond. Durned thing had rose up about ten, twelve feet or more.”

“That don’t seem odd, Jimmy,” Clem said. “We been getting lots of rain this month.”

“Sorry, I didn’t make myself entirely clear. What I’m saying is that the whole blamed pond had rose up vertical-like, straight up into the air. It were elevated so high that I couldn’t see the surface of it—but I could see the underside of the water and the dirt pond bed underneath, clear as a bell, every up and down of it. And all that water was just a-hanging there above.

“Now, I for one ain’t never seen such a thing. I figured it were a weird case of atmospheric osmosis. Like on a cool wet morning when you see the fog hanging in a sheet over a field, a few feet above the ground. Thing was, I’d come there determined to fish, come hell or high water! Which, now that I think about it, describes the situation pretty well…”

Jimmy paused to take another shaky glug from his beer. He pushed on past the guffaws of his friends. “And I set out to do just that. The pond bed was mucky, so I put me on my hip-highs and dragged my boat out onto it. Weren’t too difficult, since it were plenty slick, and mostly downhill. I figured I needed to have a place to sit down whilst I fished, after all.

“I got the boat under the deepest part of the pond, which was about a hunnert feet or so from the bank. I knowed that was where Ebeneezer lived, y’see. The water above me cut out most of the sunlight. Eerie as could be, all shimmery and suchlike, but enough light leaked through so’s I could still see okay. I rigged my line, baited my hook, and arranged the float to be about thirty foot above it—which I figured was about the depth of the spot where old Ebbie dwelt. Then I cast my line directly upwards, through the bottom part of the pond. I let the float carry the line upwards, until it got slack. A little water leaked down the line into the boat, but nothing too serious.”

At this point, Tallulah Jane delivered Jimmy’s lunch: chicken-fried steak smothered in white gravy, with grits and a big helping of steaming collard greens on the side. He dug in.

“And so now we’ve got to ask,” Clem said, rolling his eyes. “Did you manage to hook Ebeneezer?”

“Yep, caught him good, I did,” Jimmy said, his mouth full. “I done reeled him in out of the pond overhead, and the slimy sucker fell straight down into my lap in the boat. Which was kind of a shock, considering how big he were. Problem was, he left a sizable hole behind him in the bottom of the pond, and water commenced to pour through it, right on top of me. Then I heard a kind of slushy ripping sound, and the whole kit ‘n kaboodle gave way, all at oncet. I’m telling y’all, I was durned lucky to make it back to the pond bank, since I don’t swim all that good. It were a strange thing, a strange thing for sure. Lost my boat, all my gear—and Ebeneezer, again.”

“That’s a heckuva tale, Jimmy,” Bert said. “But I’m still betting you just drunk too much and fell out of your johnboat, right?”

Jimmy huffed and shoveled another forkful of food into his mouth. “It’s all according to whichever you want to believe, Bert.”

Clem glanced out the window of the diner. “Um… don’t want to upset you, Jimmy, but it appears like your coondog Horace is up to something mighty strange outside.”

They all turned to look. Horace floated above the bed of Jimmy’s pickup, legs flailing.

“Sumbitch,” Jimmy said. “I done told that dumb cur not to drink that pond water. I reckon I got to reel him in, ‘afore he ends up in the next county.”

Jimmy tossed money for his tab on the table, then hustled out to the parking lot. The last thing Clem and Bert saw of him, he was airborne, pursuing Horace toward the southeast.

GARY CUBA lives with the smartest person he ever met (his wife, that is) and a teeming horde of freeloading domestic critters in South Carolina, USA. Besides numerous appearances in Stupefying Stories, his quirky short fiction has been published in more than eighty magazines and anthologies, including Nature Futures, ReadShortFiction, Daily Science Fiction, Universe Annex (Grantville Gazette), Penumbra, and multiple times in Andromeda Spaceways Inflight Magazine. See http://www.thefoggiestnotion.com to find links to some of his other work and to learn more about him.

4 Responses to Fiction: “Bottoms Up” by Gary Cuba