Fiction: “The Roads to Hell” by Larry Hodges

Toby stared at his ticket: Bus 666 to Hell. After a lifetime in politics, always with the best intentions, this was his reward?

The last thing he remembered were chest pains and falling to the ground; next thing he knew he was at the bus station. He’d tried to take Bus 42 to Heaven, but the haloed bus driver checked his ticket and ordered him off.

“Bus 666 to Hell leaves in five minutes,” yelled an aging bus driver. “All aboard!” The man had folds and folds of wrinkled, gray skin that fluttered in the breeze under cascades of white hair. He wore a blue bus driver’s uniform and matching cap that seemed to rest too high over his head.

The bus was nearly full. Toby took the seat on the left directly behind the driver’s seat. Soon they departed. It was a bumpy ride, as if the road were covered with pottery that crunched as they drove over it.

“How’re you doing?” the bus driver asked. He’d rotated his head completely around, looking backwards, like the girl from The Exorcist. It should have broken his scrawny neck. Piercing red eyes dominated his wrinkled forest of a face.

“As well as anyone condemned to Hell,” Toby said.

The bus driver chuckled. “I’m sure you had good intentions.”

“Oh, I know the way well. Perhaps you should enjoy the show outside?”

Toby didn’t see anything outside. The formless gray beyond the road extended to the horizon.

“Lower,” the bus driver said, still staring at him.

Toby looked down just in time to see a writhing hand reach up toward him. He jerked back. Then he carefully peered out the window.

Waving heads and arms came out of the pavement. Soon others on the bus noticed them. A woman screamed while a man sobbed uncontrollably. Most stared out the windows in frozen shock.

“Liberal ideologues,” said the bus driver. “They try to help everyone with high ideals. Most mean well, but the poor become their weapon, and since they represent them, they can’t compromise, and so nothing gets done. They pave the left side of the road to Hell.”

Toby leaped to his feet and looked ahead. Human heads and arms paved the road, reaching up out of the pavement as if pleading for mercy. He watched in horror as an equally horrified head on the right stared at the approaching bus. There was a bump and a crunching sound. It knocked the bus driver’s cap off, exposing two horns.

“Conservative ideologues,” said the bus driver. “They want to think with their heads but forget to think with their hearts. Most mean well, but the rich become their weapon, and since they represent them, they can’t compromise, and so nothing gets done. They pave the right side of the road to Hell. So, where do you fit in? You realize that Hell is only a metaphor, and that the real Hell is wherever you end up, like these poor souls?”

“I tried my best!” Toby cried.

“You had the best intentions,” the bus driver agreed. “But you used your ideology to divide and inflame—out of political convenience—rather than to find workable solutions. One can be liberal or conservative without being an uncompromising ideologue, beholden to an ideology at the expense of getting things done for the common good.”

It was true. Toby even remembered the first time he’d used divide and inflame tactics to rally his constituents. He stared at the damned politicians that paved the road and broke out in a cold sweat. What have I done? He saw another person screaming as the bus approached. The screaming continued even after the crunching sound. Just another bump in the road. Was there a place in the pavement reserved for him? If only I had a second chance. . .

“Now you will pay for your sins, for all eternity,” said the bus driver. His body began to grow until he had to lean over to make room for his horns. His clothes ripped off, revealing the massive red Devil himself. Hysterical screams came from the people on the bus. They tried escaping through the windows, first trying to open them, then pounding at them with their fists, but they held firm. A woman tried running past the Devil for the door, but the Devil slammed her backwards with a gesture. He then looked back at me and grinned. “Welcome to your road to Hell, paved by your own good intentions!”

Then the Devil’s eyes went wide as he clutched at his muscled chest.

“I’m having a heart attack, you idiot! Even deities like me and God don’t live forever.” The Devil fell to the floor, fidgeted for a moment, then lay still.

Toby stood over the body for a moment, then tapped at it with his foot. Then he shoved it aside and sat down in the bus driver’s seat. He looked back at the others on the bus, who mostly stared, wide-eyed, at Toby and the dead deity. We all deserve a second chance, he thought.

“I’m turning this bus around,” he said. Somehow, someway, he’d find his way home and they’d all get that second chance.

The Devil stared at his ticket: Intergalactic Flight 666 to Hell. After a lifetime on Earth, always with the best intentions, this was his reward?

The last thing he remembered were chest pains and falling to the ground; next thing he knew he was at the space station.

“Intergalactic Flight 666 to Hell leaves in five minutes,” yelled an aging pilot. “All aboard!” Soon they departed. 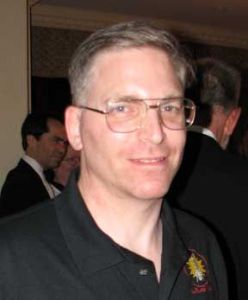 LARRY HODGES’ first novel, Sorcerers in Space, from Class Act Books, came out in November, 2013. It’s a humorous fantasy that parodies the U.S.-Soviet space race of the 1960s, but with sorcerers instead of astronauts. A resident of Germantown, MD, Larry is an active member of Science Fiction Writers of America with over 70 short story sales. He’s a graduate of the six-week 2006 Odyssey Writers Workshop and the 2008 Taos Toolbox Writers Workshop. His story “The Awakening” was the unanimous grand prize winner at the 2010 Garden State Horror Writers Short Story Competition. His story “Rationalized” won the November 2011 Story Quest Competition. He’s a full-time writer with eight books and over 1500 published articles in over 140 different publications. He also writes about and coaches the Olympic Sport of Table Tennis, is a member of the USA Table Tennis Hall of Fame (Google it!), and once beat someone using an ice cube as a racket. Visit him at www.larryhodges.org.

4 Responses to Fiction: “The Roads to Hell” by Larry Hodges