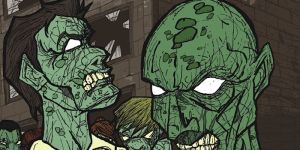 “Time travelers brought us to our present situation,” Senator Aciedo said loudly, trying to have his voice heard over the muffled roar of screams, grunts and groans echoing through the Capitol building from outside its thick walls. He paused as the chump!-chump!-chump! of AZ-47 decapitation rounds from the Capitol Guards’ guns grumbled loudly, then diminished.

The cacophony of screams, grunts and groans likewise now attenuated, he began again. “The Russians, damn their non-existent souls, should have known better than to mess with Father Time. Chronos Unleashed, indeed! If they had checked with us, the world wouldn’t be having this—this—” Here he stumbled, searching for the proper word. Cannot use the Z-word, absolutely cannot! The media would murder me!

“Objection! Objection!” From the floor, the Opposition was screaming. Finally, one Senator was given the floor. “There is no evidence of any, any so-called apocalypse, for want of a better word. These unfortunates outside our chamber—” Aciedo grimaced as yet another crescendo of screams, grunts and groans steady built up, “—are the victims of disease, of neglect, of ignorance. We should be working here to fund research to help them, not to—”

A sudden surge of raucous noise cut off the speaker, followed by a gagging odor of putrefaction. The Senate chamber doors creaked and groaned and finally burst inward from the brute force of wave after wave of pale-skinned, ragged and bloody figures, screaming, grunting, groaning, grasping at the Senators and their aides, biting them when they were able. Senator Aciedo recognized several Capitol guards among the rotting, stiff-legged invaders. Damn! That virus acts fast! he thought without thinking as he strapped on a respirator mask and unstrapped his own AZ-47, quickly mowing down the nearest group of gruesome attackers. He was gratified to see that all the Senate aides and other Senators were likewise firing their decap rounds, resulting in emaciated heads rolling this way and that like lawn-bowling balls, green blood gushing the aisles, staining seats and TV monitors alike. This stench alone is almost enough to kill you! he thought. But death was only the beginning if this virus infected you!

Within five minutes, the Senate was once again back to normal, the hazmat-suited, ax-wielding Capitol Maintenance crew rapidly cleaning up the bulk of the mess with their usual aplomb, spraying disinfectants and deodorizers to wash away the stench of the decaying, decapitated bodies—and finishing the job on the few animated but immobile corpses left with heads attached.

Wiping green stains from his face mask before removing it, Senator Aciedo took the podium once more, and continued the day’s business. “Our first witness will be Dr. Mesach Maximov, distinguished professor of science, formerly of the former nation of Russia. Dr. Maximov, if you please.”

Maximov moved his massive Levantine frame into the chair behind the witness table. “When we Russians invented time travel, or Vremya Zemalya,” he said, “we were very aware to prevent paradoxes. We could not change past, we would not interfere with the history, much as we would have liked.” Senator Aciedo wondered just what kinds of changes the Russian would have liked to make: strangle Stalin in the crib, maybe? Or maybe Gorbachev?

“And so, we experimented with sending only immaterial, er, materials, into past and future. That is, we could send minds of time travelers back into past, into minds of past people, to observe, to remember, but not to affect actions of people of the past or future. And it worked! Was beautiful! The reports from St. Petersburg and October Revolution alone were—”

“Dr. Maximov,” Senator Aciedo interrupted, “Thank you for your testimony. We are all aware of discovering that Ulanov was not quite the heroic figure some once made him out to be. But,” his voice grew serious, “we are here to discuss the, uh, um, present situation, the virus that is affecting large numbers of our—”

“Objection! Objection!” the same Opposition voices interrupted. “The Senator is exaggerating the threat. He must stop these unfounded allegations!” Dozens of other Opposition Senators joined in, and Aciedo spread his hands in surrender.

“Enough, gentlemen,” he moaned, “call it what you will. But I think the threat that we face must be described before it can be attended to. Dr. Maximov, would you address the, uh, present situation, and how time travel may have caused it?”

“Da,” Maximov grimaced, his nose wrinkling at the residual smells left after Capitol Maintenance had finished their work. “As you know, Russian economy flourished when we were able to offer Vremya Zemalya over the Internet, allowing paying tourists to choose any time and place of their wishes. Projecting their minds by the millions, into watching surprises of the Pyramids, shock of Crucifixion, excitement of Coliseum Games, actual Atlantis, and—”

“Da,” the aging scientist said. “After one year of VZ, hundreds of millions of persons had paid milliards of yuan for their VZ mind-traveling. Especially in Russia; almost every one of our citizens had escaped into golden past, a place of their choosing. Everyone but us—you, me and a few older scientists whose brains were just too old, too ossified, to accept VZ transfer protocols.

“And after one year, first reports began to come in. Human bodies, mindless, rotting, rampaging throughout our country. Emergency systems overcome. Few heroic medical doctors were able to strap down and investigate poor creatures. They found that bodies were infected with unknown virus. Strangely, brains of these creatures were operating only minimally, as if no consciousness present. And even minimal maintenance, involuntary systems, had shut down, so bodies were self-degenerating.”

“Unknown virus seems to be initiated upon the return of VZ’ers. Triggering mechanism must be at quantum level, because we were unable to view even with our electron microscopes. And then outbreaks in your own country began.” The scientist shook his head, shuddering.

“Yes, Dr. Maximov,” Senator Aciedo took over. “We are familiar with that outbreak, quite familiar.” Aciedo could not bring himself to violate the Preferred Consensus, could not say the Z-word. Unfortunates was necessary, but not at all sufficient to describe the literally lost souls of the VZ’ers. But just as unfortunate were their victims, when a VZ’er’s bite—saliva—could instantly infect and override a healthy person’s immune system. “But how,” he continued, “did this happen?”

The Russian sighed and groaned. “Minds of VZ travelers, those who traveled many, many times, somehow got stuck in past. Some kind of accommodation to minds that left our present too many times. Maybe each trip took away little consciousness, allowed little more ability to stay in past host? My colleagues in former Russia were believing that as mind diminished, normal viruses in body reacted to conquer remaining intelligence. Whole body became virus machine.”

Grimacing, Senator Aciedo said, “You mean, every one of the, uh, unfortunates is driven by a virus, their minds totally gone?” He took a deep breath, “And just where are these lost minds? Do you know?”

Maximov gave a Russian shrug of hopelessness. “VZ’ers are all virus. Bodies rot because virus is not alive, has no reason to maintain anything but attack mode in order to propagate. No other purpose.

“As for minds of more than billion people, VZ’ers, we think they are marooned somewhere in past. Nothing can be done for them. No rescue. No bodies to return to.”

Aciedo silently thanked God that he himself had been too old for online time-traveling. He had viewed the rather shocking re-creations of momentous past events based on descriptions of the VZ’ers who, in the early months of the craze, had returned with fantastic stories of high technologies, lost civilizations, and reports of religious and historical events that differed wildly from accepted versions. Truth hurts, he recalled a Russian saying. Indeed!

A thought struck the Senator and he blurted out, “Dr. Maximov, if all of these hundreds of millions of people, billions maybe, are stuck in the minds of people in the past, can they have any effect on our past? Is our past really our own?”

The Russian put his large hands over his bearded face. “As virus degeneration progressed, some VZ returnees told stories of physical interaction with hosts in past. They said they could make hosts do things. We feared for integrity of past. Afraid of making changes we could not control or predict. Some returnees said they had been active in the bodies of Napoleon, Akhenaton, King George Three, some American Presidents, some Arabs, many Roman Emperors, even Biblical prophets. But before we could discover cause and effect, virus plague occurred, and you know rest.”

Aciedo spread his hands. “Then billions of people are in the past, changing it as we speak, with the knowledge of modern history and technology. What have you done?”

Before the scientist could answer, Aciedo’s attention was grabbed by the sounds of yet another onrush of screaming, grunting, groaning mobs of VZ’ers. This time, however, they charged through in numbers that overwhelmed the remaining Capitol Guards. In the mad crush that followed, one of the creatures bit the Senator through his sleeve, taking away a chunk of suit and skin. The gusher of Aciedo’s arterial blood immediately attracted other undead, and they converged on the Senator.

Aciedo had only seconds of consciousness left before the virus took control. In the dark descent toward oblivion, he wondered why his final thoughts were of Ambrose Bierce. 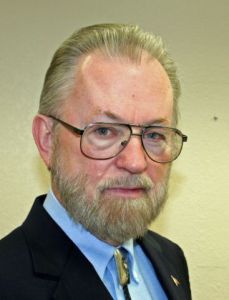 Arlan Andrews, Sr., DSc, PE is founder of SIGMA, a think tank of science fiction authors, and is a Registered Professional Engineer and professional member of the Science Fiction and Fantasy Writers of America (SFWA). While working at the White House Science Office in 1992, he observed a lack of imagination on the part of government technologists and forecasters, and so set up SIGMA to provide the practical futurism of science fiction writers for vital national needs.

2 Responses to Fiction: “Foundation and Zombies” by Arlan Andrews, Sr.