Fiction: “Riders of the Epochalypse,” by Evan Dicken 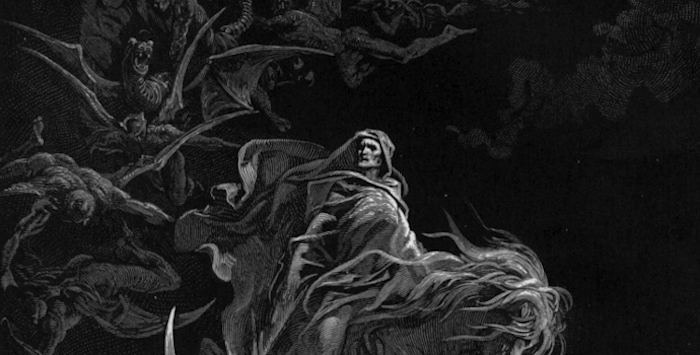 The world was scheduled to end at midnight on December 31st, 4012. Unfortunately, there was no one there to see it. The four heralds of the apocalypse charged forth; ready to usher in the end of mankind, then spent most of the day cantering across empty sea bottoms, flattened mountain ranges, and plains of featureless glass.

“Where the Hell is everybody?” War glared at the others as if they were playing a prank on him.

“Well, they’re not dead.” Death reined up on the edge of a scorched crater. “I would know.”

“I’m not getting anything, either.” Pestilence sniffed the sterile air with disdain. “No bacteria, no viruses, not even a stray microbe.”

They looked to Famine. She sighed, her cadaverous cheeks ballooning in a morbid caricature of obesity. “No one is hungry. There is no want.”

“Do you think they left?” Death asked.

“Of course they left!” War’s frown took on a petulant cast, and he smote the ground with his sword. There was a crack as the earth split.

The others circled him, their cruel faces set in uncharacteristic expressions of concern.

“Hey, you can’t do that yet!” A pustule on Pestilence’s arm burst at his nervous scratching.

“Who’s going to stop me?!” War raised his sword again.

There was an ominous rumble.

He looked heavenward, and lowered his blade. “Fine,” he said to the sky. “But don’t blame me. You’re the one who didn’t think to check up on them from time to time.”

“Well, where are they?” Famine slumped forward in her saddle as if the very question exhausted her.

Death clutched the rusty blade in skeletal hands and waved the crooked end like a divining rod. “Curious.”

“What?” War almost shouted the question.

“Well, let’s get on with it.” War urged his horse into the air. When the others didn’t follow, he turned in his saddle and fixed them with a pitying stare. “C’mon, hurry up. Do you want to go back behind the seals? Because that’s what’s going to happen if we sit around not destroying humanity.”

The three riders still on the ground exchanged nervous glances, and then galloped after him.

They rode into space, past planets terraformed and left to grow wild; past colony worlds used and forgotten in the mad rush of progress; past suns trapped in vast artificial spheres. They picked their way through massive fields of debris, the remains of battles of such ferocity and scope they left entire systems scourged and broken.

At last, they found the human race drifting amidst the Small Magellanic Cloud.

“They’re all around us.” Death waved her scythe at the eddying fog of formless energy and mass that filled space for parsecs.

“But, it’s not people.” Pestilence coughed without covering his mouth.

“Are they even individuals?” Famine passed one trembling hand through the human ether.

“I don’t give a damn what they are. We’ve got a job to do!” War raised his red sword and chanted in a voice that echoed with the remorseless tramp of booted feet.

The fog roiled and shifted. Flashes of energy split the darkness between the stars. A galaxy of miniature suns were created and destroyed in moments. War laughed as the tempest rose to a crescendo. The human cloud churned like a raging sea, but there seemed to be no other effect.

War redoubled his efforts, to no avail. At last, he lowered his arms. “How?”

Death shrugged. “Matter can’t be destroyed, only changed. As long as they have energy, it looks like they might be able to keep this up indefinitely.”

“Energy?” War cut the ether ineffectually with his sword. “So where are they getting it from?”

“It’s the black holes, something to do with cosmic momentum.” Famine’s words were almost a whisper.

“Impossible.” Death tried to grimace, but the dried muscles in her cheeks remained fixed in a toothy grin.

“I don’t care how they’re doing it! I’m going to stop them!” War spurred his horse toward the nearest singularity.

The others watched as the Red Horseman’s gallop slowed to a canter, then a trot, and then to nothing as he stretched out along the black hole’s event horizon.

Pestilence’s chuckle was like the crackling of dry leaves. “Serves him right. Now, let’s see if they can still suffer.”

His outline seemed to shift and crawl. Dark lines of putrescence threaded the shifting fog like varicose veins. Pestilence dispersed like an eye-dropper full of blood squeezed into the ocean. The cloud took on a slight greenish-purple hue, but did not otherwise change.

She opened her mouth. When nothing happened, she opened it wider. Famine’s jaw cracked and distended like a serpent’s, the black hollow of her mouth growing in size and density. Bits of the human cloud swirled, swimmers caught in the terrible gravity of her hunger. Famine’s emptiness became an all-consuming void, and humanity loved it.

“Damn.” Death cantered away from the newly-formed black hole. The human fog looked better than ever.

She gnawed on one long, yellow finger bone and tried to wince. This wasn’t turning out at all like she’d expected. Still, anything was better than going back behind the seals. She could handle disappointment; she could handle failure; it was the waiting that had always bothered her. Death gripped her scythe and put heels to her horse.

“Are you sure you want to do that?” A tired voice called from behind her.

Death turned to regard the speaker. She was tall and thin, with eyes so pale as to be almost colorless, and a face etched with deep worry lines. She rode a horse the color of dirty dishwater.

There were three other riders. The first was a small, scraggly-bearded man who slumped forward on the neck of a grey mare, his jaw slack and his gaze emotionless. Beside him rode a bespectacled woman in a severe dress, clutching an enormous book as if she were the only thing keeping it from floating away. Her horse was a construct of folded paper covered with tiny writing.

The last rider sprawled on the back of a gilded elephant. He held a pitcher of wine in one corpulent hand and a skewer of roasted meat in the other.

“Who are you?” Death asked.

The woman with the book sniffed. “I suppose you could say we’re your replacements.”

Death clacked her teeth together. “Now wait just a moment—”

“My companion misspoke.” The pale-eyed rider cut in. “We’re here to help.”

“Yes.” The severe woman’s glasses flashed in the light of nearby stars. “You see, your concepts are a bit…dated.”

“It’s not your fault, really.” The fat man tittered. “The post-modern apocalypse requires something of a paradigm shift. Other talents are required to enact humanity’s demise.”

“Like what?” Death folded thin arms across her hollow chest.

“Decadence.” The fat man raised his wine in salute.

“Knowledge.” The woman with the book gave a self-important smirk.

“Eternity.” The pale-eyed woman met Death’s gaze with a smile that was almost welcoming.

The disheveled man on the gray horse sighed and sank even lower in his saddle.

Eternity nodded in his direction. “Boredom.”

“What about my…colleagues?” Despite how closely they’d worked together, Death couldn’t really call War, Pestilence, and Famine her friends.

“They’ll be fine, I’m sure.” Decadence flapped one be-ringed hand in a dismissive gesture. “Being aspects of fate and all. Now, if you don’t mind?”

“Be my guest.” Death turned her horse away, scythe held low as she began the long lonely journey back to Earth.

“Death?” Eternity called after her.

Death composed herself before looking back. “Yes?”

“Don’t leave yet. We will need you eventually.”

“Of course.” Knowledge nodded at the cloud. “When we’re through, they’ll be practically begging for you.”

The group parted to let her in. Death couldn’t believe she’d been worried. Different times might call for different measures, but she was change: inevitable, inescapable, unmitigated change.

As they rode toward the cloud, Death’s cracked lips writhed into the semblance of a shy smile. Perhaps it was time to make some new friends.

By day, Evan Dicken studies old Japanese maps and crunches data for all manner of fascinating medical experiments at Ohio State University. By night, he does neither of these things. His fiction has most recently appeared in publications such as: Analog, Shock Totem, and Escape Pod and he has stories forthcoming from publishers such as Beneath Ceaseless Skies, Daily Science Fiction, and Chaosium. Feel free to visit him at: www.evandicken.com. 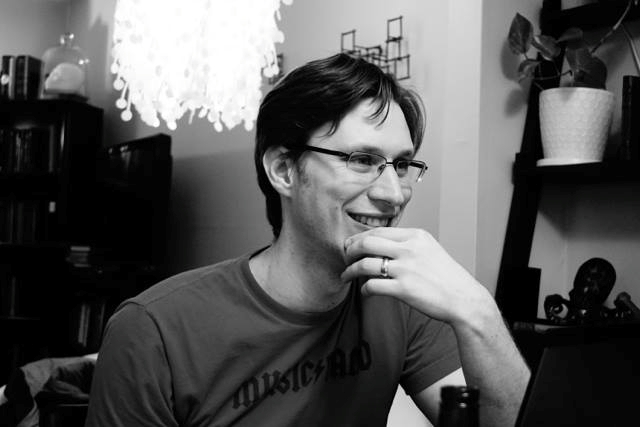