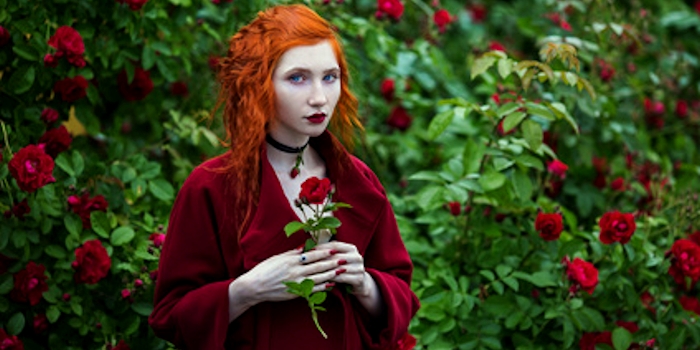 “There, there,” Anthea crooned, “nearly done.”

A pernicious root encircled one wrist. With a snip from her secateurs, the offending appendage dropped to the conservatory floor and lay there, twitching.

Content in the warmth, surrounded by the rustle of leaves, she hummed as she worked; potting the newly separated plants and feeding them her specially brewed liquid compost.

Silence fell when the wooden door creaked open and a tousled head peeked around the side. “There’s someone here to see you, ma’am.”

She pursed her lips, silently cursing herself for forgetting to lock the door, and covered the convulsing root with her boot. “Timothy. What have I told you about entering the greenhouse?” Her voice held all the warmth of an ice box.

“Mr. Fenton.” He slipped away, closing the door behind him.

Timothy’s boldness began to outweigh his usefulness; soon he would have to be dealt with. Unfortunately, discrete, obedient servants had proved to be a rare commodity in Lancashire.

She pressed down with her boot until she heard the tell-tale pop as the root burst underfoot, then picked it up, and lifted the lid to one of the bins. An eyeball, atop a pile of steaming, rotting compost, stared reproachfully up at her. She threw the root on top of it and closed the lid, reminding herself to add a layer of manure to the bin when she returned.

The plants twisted around and watched as she sailed out of the conservatory, mouth set in a determined line.

She entered the drawing room and paused at the sight of him, dark and lean, standing near the fireplace, staring into the crackling flames.

They had first met at Lady Harrington’s ball. Arriving late, she’d found the ladies atwitter over the newest arrival; a single man of means. She’d discreetly snuck a glance. His pocked face, aquiline nose and thick lips, though not attractive, lent him an air of danger. When his gaze slithered up to her face, she’d felt a frisson of excitement. However, she was no young lady, looking to make a good match. Nor did she need the complications taking a lover would bring.

Since that moment he’d been relentless in his pursuit. But, despite the initial attraction, she’d quickly grown weary of feeling like a mouse being hunted by a hawk. Perhaps today she would reveal her teeth and put an end to this one-sided affair.

She took a deep breath, lifted her chin, and drifted across to join him, her black skirts sweeping against the wooden floor, alerting him to her presence.

“Anthea, my dear.” He stepped forward and grasped her hand.

“How can I help you, Mr. Fenton?” She pulled her hand away before he had the temerity to kiss it.

His eyes hardened and lips quirked into a smile.  “For a start you could marry me.”

She raised an eyebrow. Nothing could convince her to marry again. The death of her first husband had provided her with a taste of life as an independent woman. The death of the second and third allowed her the financial freedom to do so without constraint. “Pray, what could you possibly offer me that I don’t already have?”

He glanced around the room.  A grand piano dominated one corner. Luxurious rugs, tasteful wall hangings, and heavy, elegantly carved, mahogany furniture, created an air of opulence. “I can offer you my wealth of experience.” He leant forward, breath warm against her cheek. “And indulge your every desire.”

She stepped back and let out a tinkling laugh. What could he know of her desires? “Mr. Fenton, you are a dreadful flirt. But, as I have told you before, I have no interest in marriage.”

She shrugged and looked away.

“The cake covered in crystalline petals?”

She restrained a smile. What would he say if she told him she preferred devilled kidneys?

His voice hardened. “The rabbit, its throat cut, blood steaming.”

She whipped her head around, met his calculating gaze.

He laughed. “Oh, yes. I’ve been watching you. What do you do inside that conservatory? And what did you do with the rabbit, the dog, and the other dead animals you secreted inside?”

She momentarily shut her eyes in relief. He knew some of it, but not all. “Would you like me to show you?”

Snow crunched underfoot, the powder white of old, desiccated bones, as they walked to the conservatory. A large, rectangular structure made up of hundreds of glass panes, it sat a small way off from the main house. Green leaves carpeted the inside of the building, providing protection from prying eyes.

The weak sunlight, which reflected off the glass and snow, half-blinding them, did little to ward off the chill.

Her fingers shook as she tried to fit the key to the lock.

“Allow me.” His hand lingered on hers as he took the key.

He unlocked the door and preceded her into the lush greenery, a daffodil bending its flowery head to brush against him.

She quietly closed the door and turned the lock, then joined him, pausing for an instant to glare at the offending daffodil.  Its head drooped in deferment.

They stood in front of the potting table, strewn with damp, loamy soil and gardening implements. “A saw?” he asked.

“For the larger plants,” she replied smoothly, wondering if he’d noticed the rust-colored stains on the teeth.

“Really? I prefer an axe myself.”

“I didn’t know you cared for gardening, Mr. Fenton?”

“I know enough.” He was new to these parts, and without any close friends or family; which made him perfect for what she had in mind.

He reached out and gently removed the comb securing her hair.

She allowed the indiscretion. It would be his last.

“Don’t hide your true nature. Not from me,” he whispered.

Dark tendrils fell around her face and curled in the warm air, as she felt something start to unfurl in her stomach.

A tremor passed through his body, and he abruptly turned away, presenting the ideal opportunity.

She grabbed the trowel. Like all of her tools, she kept it well-sharpened. The plants would hold him down; after all, this was for their benefit.

She took a step toward him. He turned back and she gasped. The trowel dropped to the floor, forgotten.

From his scarred face, thorns emerged. Stems slid from his pants leg and wound their way upwards, embracing him, and then bursting into flower. Roses. Identical to the ones he’d given her.

Her breath quickened. “What are you?” Wetness slid down one leg and she moaned. “What is happening to me?”

His nostrils flared as he inhaled her scent, the smell of rotting flesh pouring off her in waves. “Oh, you are far rarer than I imagined.”

She spread her legs, as though giving birth, and a flower emerged, like a sheath, dark green on the outside, burgundy on the inside, enveloping her body; a corpse flower.

The plants whispered furiously among themselves. Some strained against the binding of their pots, determined to see.

His thorns tore her delicate petals as he fell on her. 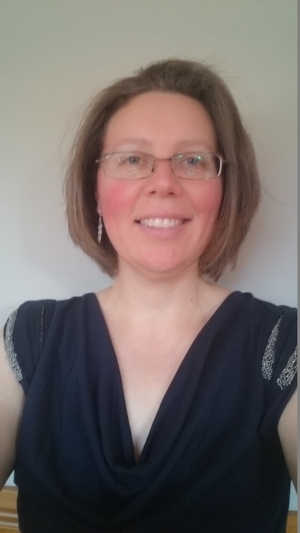 Andrea van Lit resides in rural Tasmania. A chocoholic, keen gardener and jazz muso, she finds writing the perfect outlet for her dark sense of humor. Her short stories have appeared in The Sirens Call eZine and The Literary Hatchet.