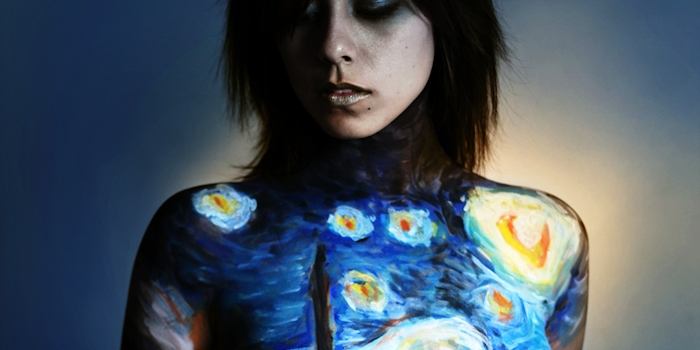 Colin had a white birthmark on his blonde hair and one on his blonde lashes. Blindingly white and full of bones, he looked more like a towering birch than a teenage boy.

“You want to know how white I am?” He whispered over the book stacks.

Ari glanced at the librarian, then followed Colin’s eyes under the table. He pulled up his pant leg, exposing a white shin, with white hairs like lice, and a constellation of chalk white vitiligo. Ivory freckles criss-crossed his pale lips.“Your turn.”

“This could drastically reduce the number of kids on the autism spectrum, cut back on bullying, launch the next generation into a compassionate phase of humanity!” The doctor preached to Ari’s mother.

“Mood skin,” she echoed, and held out her arm.

In the Nurse’s office, Ari cradled a wet compress against her swollen cheek. Colin stumbled in. Dark red blood dripped from his nose down his snow white chin. He winked at Ari. “Like a virgin on her wedding night.”

With guidance, the irrational impulses of early childhood make way for more rational thinking. In this way, mood skin would fade as children developed more sophisticated verbal and social abilities. By age seven, it was guaranteed to disappear entirely.

Rare side effects, such as a progressive loss of pigmentation, mainly vitiligo, were seen in a negligible percentage of clinical trials.

In an even rarer side effect, some children did not outgrow their mood skin at all.

Colin tormented every lab partner until the chem teacher had no choice but to re-partner him with the last available student, Ari.

“Took him long enough,” he sniffed. “Don’t you ever talk?”

Thin blue clouds rose up her neck and painted her jaw.

Colin stretched his bone-white fingers out on the black resin table top. “I suppose if my skin said as much as yours, I might shut up from time to time. But not likely,” he added with a grin.

Sunlight shone through the side of Ari’s eyes, refracting streaks of color onto Colin’s fingers.

Already born with decreased melanin synthesis, Colin was shackled with the next phase of the mood skin side effect, vitiligo. This progressively covered his body, sucking up drops of pigmentation from his skin, leaving behind patches of white. Like splatters of bleach on milky white linen.

In study hall, Colin watched Ari across the table. His pale blue eyes, the only color left to his face. “You’re like a kaleidoscope. All the pieces are the same, but every time I turn around, you look different.”

Bright purple bloomed on the bridge of Ari’s nose, and flowered out over her face toward her ears and hairline, dissipating like ripples in a pond.

Colin snorted in surprise. Ari smiled and dropped her gaze.

As Ari aged, and her emotions grew more complex, so did their expression through her skin.
When kids screamed taunts, she turned pumpkin orange. When they scratched, bit and pinched, she cried streaky green tears.

The day they broke her nose, she bled a rainbow.

Colin rolled out of detention and found Ari by the lockers. “Hey, check it out, I can change colors too,” he said, pointing to a fresh black eye.

“I put the other kid in the infirmary,” he dismissed, “don’t worry.”

Colin lifted his skeleton-white fingers to her face, awkwardly tucking a tuft of hair behind her ear, and grinned. “We look like a before and after picture of an Easter egg.”

Ari’s mother sent her to behavioral conditioning. EMDR trauma treatment. Electroshock. Subjected her to sensory deprivation chambers. Hormone therapy. An array of medications. Nothing stemmed the tide of her adolescent mood swings. Or the tandem spectacle on her skin.

By fifteen, Ari’s mother sent her away to a high school for troubled teens. The money from the lawsuit paid tuition in full.

Colin walked Ari to trig. Sickly green blotches covered her face. “What? Do we have a test today or something?” Light yellow sparkled from the upturned corners of her mouth. Colin pursed his lips. “Damn it…”

The first reported death came from a town outside of Duluth, Minnesota. Some eighteen-year-old girl in a grocery store slipped into an epileptic seizure. Spasmed in a light show of color and died before the ambulance even arrived.

A few days later, a twenty-year-old boy on a double-date suddenly bloated blue and white as a corpse and suffered a fatal stroke.

Then a sixteen-year-old in Connecticut erupted in boils. Oozed colorful pus like puddles of gas and died from staph shortly thereafter.

During Assembly, Colin batted a boy’s head about until he finally vacated the chair next to Ari.

“Maybe you should get meaner,” Colin said defensively, “After all, it’s not the angry albinos who are dying.”

Ari blanched as white as Colin. An atomic fallout of white ash.

“That was a stupid thing for me to say. Hey,” he said, jiggling her elbow, “hey, don’t be like that.”

Then a Swedish research team developed a risky new procedure to remove the amygdala portion of the temporal lobe. Recipients became indifferent to affection. And danger. Lost their ability to determine whether they liked or disliked a person they’d known forever. But they lived.

Mood skin babies flocked to Stockholm by the plane load.

In the high school cafeteria, Ari choked on a grape. She turned bright red, then purple. Colin leaped over the table, swung behind her and thrust his fists into her abdomen.

The grape ejected. Her body went slack. And Colin felt her back shake with silent sobbing. No one else seemed to notice.

He tightened his arms around her and pressed his face into her neck.

Ari’s mother sent her links to articles, pamphlets, testimonials, all espousing the benefits of the operation.

“A lobotomy,” Colin said flatly. “You really want them fixing you? Again?”

“You look like an old scroll,” Colin said quietly.

His white fingers trembled as he brought them up to her face, tracing the flowery dark swirls. “Like the Declaration of Independence.”

A light projector spun through her eyes.

When Colin kissed her, his lips felt amber warm.

Memory of the kiss murmured through Ari’s bones. The heat inside Colin’s mouth. His long fingers around her skull.

Halfway to her room, her knees buckled.

Swelling with light, color rose to her pelvis. Pooled in her hips. Surged up her spine. Blinded her with sequins and glitter. Pressure built in her brain and burst through the crown of her head.

For one brief moment, she was a circus canon exploding with rainbow confetti.

Then her empty skin fell to the floor.

After the janitor swept up the hall, and all the kids assembled in the auditorium to hear the news, Colin broke into the custodian’s closet. He ransacked the trash bins and gathered armfuls of confetti, stuffing every last scrap into a white pillow case.

He buried his face against the pillow and wept, until the color from her body bled into his.

When Colin relived their kiss, he remembered pressing his nose to her cheek and squeezing his eyes tight. “For once, I’d just like to live on my own terms. Even if it means dying. Wouldn’t you?”

She brought her lips to his ear, and for the first time in her life, whispered: