Fiction: “Till Death Us Do Part” by E.N. Loizis 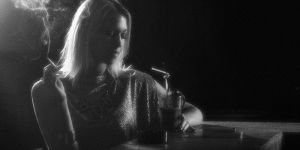 Jennifer stared at the man sitting across from her.

“Excuse me, what was that again?”

“We prefer the term undead.”

“Any other tidbits I need to know about?”

“I sparkle in the sun. So I can only work nights.”

Jennifer wished she could just go home. But she couldn’t. Because home was where her ex was having sex with a bimbo named Candy. Candy. It sounded like a stripper’s nickname, not the reason her life had fallen apart. Jennifer noticed her hands were shaking and her applicant was staring at her with bulging eyes. If she wasn’t so desperate to find a replacement bartender for Felix, she’d probably be stalking her Nemesis and that filthy traitor she had wasted her best child-bearing years on right now.

She lit a cigarette and tried to picture the man across from her, biting into Candy’s neck and sucking the life out of her. She couldn’t. For one, he was incredibly short. As if that wasn’t enough, he looked malnourished and had a couple of teeth missing. How the hell could he dig into flesh with teeth missing?

Jennifer’s patience grew thinner. ‘Igor’ would’ve been okay. ‘Vladimir’ even better. Hell, she would’ve settled for an ‘Edward’. But a vampire called ‘Bob’ was worse than a stripper named ‘Candy’.

“Listen, Bob. How can I trust you? I can’t have a … Well, you, hanging around near the all-you-can-eat buffet serving drinks, now can I?”

“You needn’t worry about that,” Bob flashed a proud smile full of gaps, “I only feed on animals. Rodents, to be exact.”

“How—thoughtful!” Jennifer said. Of all the vampires in the world, I get to interview the one in rehab!

Jennifer stood up and shook Bob’s hand. “Thank you for your time, I’ll let you know what I decide.”

Bob left and Jennifer lit another cigarette. Candy’s stupid, blonde curls were probably all over Jack’s crotch right now. The cigarette burned slowly as she tried to make her hand stop trembling.

If only she could find someone like Bob. But less miserable. Someone strong. Menacing. With a sweet-tooth. Someone who’d have no problem going all Gary Oldman on both of those low-lives. Felix walked in, just as she was putting out her cigarette.

“Any luck?” he asked as he approached the bar to start cleaning up for the night.

She opened her laptop and started typing:

She uploaded the new text on the job posting site, a big grin on her face as she hit Send.

E.N. LOIZIS grew up in Athens, Greece, in the Dark Years before the Internet. Being a bit of a loner and shy since she can remember herself, her only escape during what seemed like the longest summer vacations in the history of human recollection during the early and mid-90s was to read her way through her parents’ bookshelves. She read quite a few books many would now consider as not appropriate for an adolescent, and for the chance to judge for herself if they were right for her, she is very grateful. She now lives in a land far away from home with her husband, and a rapidly growing collection of books she promises she will read at some point.

She writes flash fiction, poems and short stories, while trying to conquer the ultimate beast: her first novel. You can find her blogging at enloizis.wordpress.com