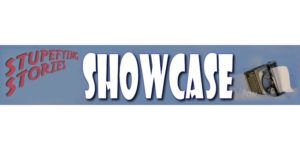 With SHOWCASE #11, we cut over to the “Crevasse” site design. It seemed like a great idea at the time. The original SHOWCASE site was, to be blunt, old, and very much a product of old-school browser-based desktop-oriented thinking. As outlined in “Show Your Work”, by late 2013 I’d concluded that in the not-too-distant future, people would be doing most of their ephemeral reading on their phones, and whatever other virtues the original SHOWCASE site design may have possessed, it looked terrible on a phone. So beginning with #11, we switched over to the “Crevasse” design.

Why do I keep calling it that? Because a.) in its original form, it was very cold, bleak, and white, and b.) all the stories that were published on SHOWCASE during this period seemed to fall into one. It was only after we’d been using the design for a while that we discovered that the embedded JavaScript and ActiveX elements were causing some of the more nervous anti-virus and anti-malware programs to block the SHOWCASE site entirely.

Ergo, be advised that some of the following links may not work for you.

One of the major design points of the new site was that instead of discrete “issues,” SHOWCASE content would become one continuous flow, and going back to older content would become simply a matter of scrolling down. Curiously enough, though, I must have lacked faith in this concept, as while they weren’t made publicly visible, I did take the time and trouble to create front pages for issues #12 and #13.

The original “Crevasse” front end was overwritten when we installed WordPress and is now lost in the mists of time. This is not altogether a bad thing.

A tale of time, space, beauty, and post office clerks.

“The Cubes,” by Taylor Vaughan

Even at relativistic speeds, it took years to travel between stars, and oftentimes shipments weren’t wanted when they finally arrived. No one knew exactly how long the old crate had been sitting down in the depths of the ship’s cargo hold, waiting…

Morpheus Stamos was a master thief who specialized in stealing rare artifacts to order. But what he stole in the library that night was nothing he had ever expected.

Sometimes a great bargain is just too good to be true…

Badger & Vole phone it in one last time.

A sadly ironic editorial on everything that went wrong in 2013 and how we were going to fix it in 2014. Had I but known…

“Cold Beyond White,” by Beth Cato

Hurry, his mother had said. The gwella, they come, their pelts thick and maws wide. And now every life in the village depended on him…

“Above the Ice,” by Matthew Timmins

ChaaSooNiik had never been this far above her home vents before, but the scientists were certain: there was something on the other side of the ceiling of the world…

Stranded on a nameless, frozen, and barren world, the survivors of the starship crash had just one chance of getting out of this alive…

What can survive the death of the universe?

Another unintentionally ironic editorial, to be filed under The Best Laid Plans of Mice…

After #13, we dropped all pretense of doing issues and switched to releasing individual stories. Unfortunately whatever teasers may have appeared on the front page were lost along with the original “Crevasse” front end, so I’m just going to improvise now.

Zane had almost finished his second beer when she walked in. The mauve hair highlighted with metallic gold was the same as her profile picture, but the rest of her was more than he’d expected. He’d sent a “Want to meet?” prompt to an attractive woman on the singles site, but the person in the doorway looked more like a supermodel. Zane wondered if he should have slammed three beers instead of two. It was a delicate tipping point between settling his nerves enough not to make a fool of himself and not getting so buzzed that he made a fool of himself anyway…

“How Love Works,” by Jamie Lackey

Carl clutched the cool seed to his chest. He’d lost everything else, but at least he still had what he’d come for. It was as big as his fist, and heavy. He’d almost dropped it when the shaman handed it to him.

His bright yellow life-raft drifted aimlessly. The crash—if there had even been a crash—was an empty space in Carl’s mind. He didn’t know what that meant, but as far as his memory was concerned, he had gone straight from the cramped airplane to this sun-baked, half-provisioned raft. There’d been no sign of his luggage, wreckage, or other survivors…

“Stanley P. Strauss, Destroyer of the Universe,” by Samuel Marzioli

How are you? I am fine. At least as fine as one can expect to be under the circumstances. As of 3 PM yesterday, the Universe as we know it is no more. So, to clarify an earlier point, I’m fine in the sense that every living thing is now dead and gone, and it’s my fault, and I feel pretty damn bad about it, but it could be worse…

Failure is disruptive, that’s obvious. What we really didn’t realize until these past few weeks is that success, if you’re unprepared for it, is even more disruptive.

When we rolled into January, we thought we finally had things under control. The series of personal and personnel issues that made 2013 such a ghastly soap opera were finally resolved. Our submissions and slush pile processes were finally beaten into, well, submission. Things at last seemed to be flowing smoothly.

Then the 2014 Campbellian Anthology hit, like a half-megaton kaiju making landfall. Not only did that book come in at roughly twice the originally projected size; not only did last-minute work on it go right down to the wire; but when the book finally did make it out the door, it went viral. We moved more than 35,000 copies in the first 72 hours alone…

“Welcome back to the 2028 CFA World Cat Spectacular. Bryan, did you ever expect to see such drama in the ballroom dancing event?”

“I did not, Stan. Our hopes and prayers are with Potpourri Sparkle Bunny and his handler.”

“So now it’s down to four, four of the most impressive specimens of felinity we’ve ever seen.”

“And here they come…

“On the Pond,” by Jake Doyle

When we first launched Stupefying Stories, it was with the idea that we would ignore genre labels and concentrate simply on publishing great stories.

So there’s no science fiction in this one; no magic. “On the Pond” is just plain a great story about guy stuff: about life, and friends, and boys becoming men—and hockey. Maybe it’s just an Upper Midwestern thing, but I’ve read this story six times now, and every time I re-read it, I like it more.

“The Wiser of Oz,” by Jez Patterson

When Dorothy was called back to Oz, it was to find the Scarecrow an arrogant, cold academic who huffed down his nostrils and regarded the world through the half-lenses of spindly-limbed spectacles. The Lion was a tattooed bully, pumped up on testosterone with swollen veins snaking down his forearms and up his neck, like he was cut from some huge alien brain. The Tin Man was an emotional wreck, jumping from therapist to therapist, suffering anxiety attacks and depression and in constant mourning for the cruelty of the world he lived in.

A trip to the Wizard was in order. The Scarecrow to find Humility, the Lion to find Gentleness, the Tin Man Control over his emotions…

“Four Corners of the Earth,” by Sandi Reed-Chan

Swept out to sea, the whole colony struggled to survive. After the earthquake their instincts had sent them to higher ground, but the highest point on their hidden island wasn’t high enough. The resulting tsunami had destroyed their ancient habitat in seconds.

Battered and beaten by back-to-back storms, all of them were exhausted. Although they were comfortable in water, they still needed air to survive. Sadly, most of the colony was lost.

A mated pair followed the racial memories of their species and swam toward a place where their kind had lived before. Several cycles later, they made landfall and the male dug a hole just past the wet sand. Gently, he buried the female’s dozen eggs before they both collapsed onto the beach.

At this time the site mutated again, to become XHTML-based, as we continued to pursue the mythical “single source” concept that would enable us to build ebooks, print books, and SHOWCASE posts from a single set of source files. We first used this technology to print a series of teasers for the March 2014 issue of Stupefying Stories, which are reproduced here, in hopes that we might entice a few more readers into taking a look at the March 2014 issue.

After this, SHOWCASE staggered on a while longer, publishing:

But despite the brave words of, “Another Quick Progress Report,” SHOWCASE was reeling. More importantly, it was not serving the purpose for which we’d created it, and I had some enormous Other Things contending for my time. So in April 2014 I put SHOWCASE on hiatus, while I went off to deal with those Other Things.

And believe me, I had no shortage of Other Things with which to deal. If 2013 was the year that was consumed by my mother’s final illness and death, then 2014 was The Year of  The Executor (sounds like a Gene Wolfe novel, doesn’t it?), and my time was not merely consumed by the business of settling her estate, it was subsequently regurgitated, reconsumed, digested, aged slowly in the rumen, and ultimately excreted in sudden, urgent, painful bouts of legal and financial diarrhea.