Fiction: “I, Boy,” by Stone Showers 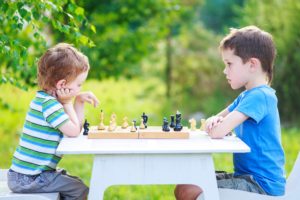 Henry Newman and I had been friends ever since his parents first brought him home from the yard sale. I didn’t care that he was older, and it didn’t matter to me that he couldn’t swim or speak seven languages. In so many ways, Henry was just like me, and because of that we did everything together.

In the mornings he and I would walk to the bus, or run, depending upon our mood. After school, we’d ride our bikes up Isaac’s Ridge and spend the afternoon searching for slugs and other creepy-crawly things. Sometimes we’d play hide-and-seek among the trees, our laughter breathing life into the forest. Henry and I spent practically every waking moment together. Except when it was raining, of course. On those days Henry’s mother made him stay inside.

The boys in the neighborhood often made fun of Henry—the way he talked, and the color of his skin. Jimmy Martin even suggested there might be something wrong with Henry, and I think he may have been right about that. Unlike the other second-graders, Henry knew nothing of the periodic table and he couldn’t conjugate even a single Latin verb. Whenever he tried to recite Mandarin, the other children always laughed at his pronunciation. I felt sorry for Henry, and tried to stick up for him whenever I could. But for some reason, Henry never seemed troubled by the insults.

“I’m just different from everyone else, that’s all, and I think that frightens them.”

Henry was always so understanding of others’ faults—so willing to forgive—and I think that’s what I liked most about him. In the beginning I thought he and I would be friends forever. Sadly, that was not to be.

My own mother was the one to tell me. Even before she spoke, I could tell that something was troubling her. Mother sat me down on the couch and folded my hands into hers.

“I’m sure the Newman’s must feel terrible about it,” she said.  “But you have to understand that Henry is old—almost six. It’s taken every penny they have just to keep him running. No parent wants to sell their children, Tommy. But sometimes they don’t have any choice.”

“They’re selling him?” I asked. “But why? Don’t they love him anymore?”

“Of course they do, sweetie. But not even I-Bots live forever.”

As one of the original I-Bots, Henry was the first iteration of what would prove to be a very popular product. Fertility rates had been declining for decades. By the turn of the century, only one woman in seven was able to conceive. To fill the emotional void, women like Mrs. Newman turned to I-Bots for solace. In time they came to treat these mechanical marvels just like real children, and for a while everyone was happy.

But then the I-Bots began to wear out.

“I know this is hard for you to understand, Tommy. But the simple truth is that Henry is obsolete, and has been for some time.”

I understood what obsolete meant. My father once owned a cell phone that became obsolete. Now he tugged on his left earlobe whenever he wanted to make a call.

“So what’s going to happen to him, Mama?”

“I don’t know for sure, sweetie. But it would probably be best if you didn’t think about him anymore.”

After dinner, I went over to Henry’s house to say goodbye. I found him sitting alone on the front porch. His skin seemed duller than normal—less shiny, somehow.

“Do you want to ride bikes up to Isaac’s Ridge?” I asked.

“Naw.” Henry shrugged and kicked at the ground in front of him. “I have to go soon,” he said. “And besides, it looks like it might rain.”

Henry wasn’t supposed to get wet. The newer I-Bots all came standard with waterproof skin, but poor Henry’s was as porous as day-old bread.

“So’d your mom say what’s going to happen to you?”

Henry rubbed his eyes, and when his arms moved I could hear his servos whining.

“Mother told me I’m going to be re-purposed. She said there’s a factory near Springfield that will be able to use some of my parts. Apparently they make toasters there.”

There wasn’t much I could say to that. Being turned into a toaster wasn’t something that most children aspired to.

My I-Bot friend smiled. “I’ll miss you too, Tommy.”

All of that happened several months ago. Since then, I’ve had a lot of time to think. When we’re new, we never worry about getting broken or becoming obsolete. We think we’ll last forever. But as we grow older we come to realize that we’re all just one faulty servo away from the scrap pile.

I don’t know how many days I might have left. My own warranty ran out months ago. I suppose my parents could send me in to be refurbished, but such things are expensive, and besides, this would only postpone the inevitable.

Truly, it’s only a matter of time before we all join Henry on the heap.

Stone Showers lives in Central Oregon with his wife and two children. His fiction has recently appeared in Fantasy Scroll, Zetetic, and Ember, A Journal of Luminous Things. Two of his previously published stories will soon be available for download on Audible.