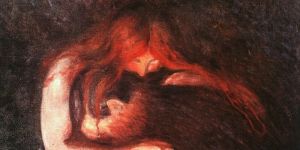 Sebastian Kane flew across the second floor of the mansion like his ass was on fire and his head was catchin’. His blue shirt was torn and bloody, his jeans were rags and equally as red, his chest would need an entire spool of thread to put back together, and he would be eating soup for the next week.

He hit the stairs, ignored them, leaped over the bannister, and dropped fourteen feet to the marble floor below. He landed in a three-point stance, flipped onto his back, drew his .50 Desert Eagle pistol from his hip holster, and pointed it up at the hall he’d just run down.

When he spoke, his jaw ground in its socket. “C’mon, c’mon.”

Sebastian stood and pulled the pistol close to his chest. “No such thing as vampires, my ass.”

Sebastian bobbed and weaved as he made his way for the front door. He was in a grand entrance so large his three-bedroom bungalow in Berwyn, Illinois could fit in it. He cleared the corners, glanced beneath furniture, and thanked God all the curtains were nearly a foot off the floor—and the sun had finally risen.

He grabbed the cold door knob, heard an electronic buzz, and felt a strong thud. He pulled on the door anyway. It didn’t budge. He heard the entire house lock itself down.

“You have got to be kidding me.”

Sebastian swung around, trying to find the thick, baritone voice; the same voice that had laughed at his crucifix earlier.

Light poured in from every window. Not a nook or cranny escaped its intensity.

Sebastian spun left and walked towards the great room. Leaning against the fireplace, in a beam of crisp golden light, was a man so black he was nearly purple, with a gray sweatshirt flung over his magnificent, naked torso.

The vampire flipped a switch beneath the fireplace; the gas ignited in an explosion of light and heat. He tossed a blackened, wooden stake in the fire and drank from the flask of Holy Water he took from Sebastian; then the flask, too, went into the fire. Nowhere on the vampire’s body was there any proof that Sebastian Kane gave as good as he got.

Sebastian glanced at the south-facing windows that made up the entire wall. The vampire was luxuriating in the sun’s warm embrace.

Sebastian was about to ask the vampire’s name again, but since that didn’t work before, he remained silent.

The vampire wore Hilfiger jeans and desert-tan military boots. He pulled on the gray sweatshirt.

The vampire extended his hands. “WAIT!” And pointed at the painting above the white marble fireplace. “It’s an Edvard Munch.”

The painting was ghostly; out of focus images of people dancing on a misty green lawn overlooking a pale ocean. It looked like whispers on canvas.

An explosion echoed through the house. The vampire’s eyes widened in disbelief, his hands grabbed at the hole in his stomach no larger than a nickel. Brackish blood poured out of his back through a hole bigger than a basketball. His spine was missing nearly a foot; all of his internal organs were sizzled, crushed, or splattered across a black-and-white paisley couch.

His dying eyes looked up at the painting. He raised his hand to touch it and stopped short. Ichors, black, thick and syrupy, dripped on the white marble mantle; hugged the rounded edge, followed the bottom, dripped onto the logs, and boiled.

No blood was on the painting.

The vampire looked at Sebastian. He tried to pull air into his ruptured lungs so he could speak. Black fluid spilled from his mouth with each effort.

He took a small breath and coughed. His skin turned ashy, teeth danced on the rough-hewn red terracotta tile. “killed..”

He dropped to his knees. “me..” The bones broke with a sound like Saltines being crushed. He folded back and his head landed with a wet thud as if it were a wadded up rag.

Sebastian placed his pistol on safe and holstered it. He looked at the sun through the windows. “New day, new rules.”

ROBERT W. HOBSON is a retired soldier. He has two published works, Camel in the Wire and Not Everything Goes Bump. Camel in the Wire won the Literary Guild Complex award for best non-fiction November, 2011, and was featured in Columbia College Chicago’s Hair Trigger 35.  Not Everything Goes Bump was published in Stupefying Stories, Mid-October issue, 2012. He is also an Honor Graduate from and is currently pursuing a Masters in Fine Arts at Columbia College Chicago. Robert lives in Berwyn, Illinois, with his lovely wife Cathy, a dog named Scully, and a cat named Mystique.