Max plunged the sensor into the ground, waiting for the battered LED in the hilt to show if the decomp level in the grave made it worth digging up. If it was daylight, and if the cemetery management would cooperate, he or Jerry could have asked, saved themselves the trial and error. If, if. No point, though. The Diaspora Laws said they were obligated to dig up the dead and put them to use, but nowhere did they say anyone had to cooperate with them to do it.

Jerry sat at the controls of the backhoe, idly watching Max as he waited for the sensor. Around them, a warm spring night settled on the graveyard. The lights of town, several miles away, banded the horizon in a muddy brown wash, obscuring the low-hanging stars. “Anything?”

“Does it look lit?” Max said, promising himself a cig if they found a usable body. Craving for nicotine curled around his guts like a cat, purring with desire, scratching at him every now and then. Lovely night like this, he almost couldn’t feel the tumor in his alveoli, nestled among his breaths. “It’s old, takes a while to sniff out the methane and whatnot.”

“Buy a new one,” Jerry said, kicking at the backhoe’s cockpit wall. His boot made a thump against the cold metal. “We can afford it.”

“New ones are too sensitive, pick up a worm fart and call it green,” Max said. As he spoke, the LED indicator settled on red. Max sighed, and tore the long spike from the ground in one fast motion, releasing the smell of grass and thick dirt into the night. Good for growing, Max thought. “We’d be digging up every damn thing around.”

“That’d be something,” Jerry said, leaning back in the seat.

“Yeah,” Max said. He stepped to the next grave over, lifted the decay sensor over his head, and slammed it into the dirt. A squeeze of the trigger, and the LED started to cycle as the sensors running the length of the spike drank in the odors and gases leaching through the soil from below. Max looked toward the town, just like many in the new West: far from the boneyard, and pulling away as much as possible.

“You’re a lucky bastard,” Jerry said abruptly, looking down at his hands. Max didn’t need to ask why. Jerry hadn’t been on the job long, and probably wouldn’t be much longer. Being around death was hard for most people, but ever since the Nystrom Process was perfected, being around what was next was worse. The last time Max bothered watching the news, before the launches and announced colonies took over the regular shows, he’d heard cremations were up 400%, even though they were illegal. Monster fines and prison terms weren’t enough.

The LED in the sensors clicked twice, and shone a traffic-light green over the headstone. Max looked over at the marker, faded and dirty in the comfortable darkness. Lucinda something, dead for almost five years. Kind of pushing the expiration date for the Process, but that’s what the test drops were for. Max nodded and jerked the sensor spike out. “This one’s fresh enough, Jerry. Let ‘er rip.”

Jerry nodded and turned on the backhoe. Unlike the sensor spike, it was a newer model, with a silent electric drive. Watching Jerry grim-facedly dig up the grave, only the whine of hydraulic arms and the soft crunch of thickly bladed sod being torn through for noise, Max realized he missed diesel engines. Sure, they were louder than hell, but they sounded like work. Honest labor should be done loudly, not quietly in the night, Max felt.

It didn’t take long to reach the coffin. Jerry shut down the backhoe and jumped down from the cockpit, pry-bar in hand. Max lowered himself into the ragged hole gently and took the steel bar from Jerry. Working this job had made Max something of a casket expert, and this one was an American Repose, made to look pretty and fall apart. A good kick would probably do it, but why risk breaking toes? Max leveraged the pry-bar against the useless latch lock and broke the hasp out with one firm yank.

“Gah, too bad I forgot the Lysol,” Max said, and lifted the lid to reveal a dried husk of a woman in a purple number that looked like a church getup, complete with stuffy hat. Except for the wrinkles, the gray skin, and the musty smell of decomp, Lucinda something didn’t look too bad. High-quality embalming. Unlucky for her, maybe.

“Into the breach, then,” Max replied, and withdrew the test bands and a vial of live Nystroms from a pouch on his belt. He fastened the bands over the corpse’s brittle wrist, marking an area of about an inch between them, and flicked them on. An icon on both bands turned green. Once the bands were synced up, a test Nystrom process wouldn’t go any further than the area between them, which was good. A corpse that underwent the full process was damn near indestructible; even without the precise calibration of nanotech, synthetic cell growth, and programming that was the full process, a body that got an uncontrolled hot dose tended to move around some and follow its own whims.

Max attached the vial to a wide-bore needle, and jammed it into the wrist, between the bands, as hard as he dared. No sense in busting poor Lucinda up, but the Nystroms had to go deep to work. He squeezed the injector, pushing the smart fluid deep into the body, and waited. It didn’t take but a couple of minutes for the telltale shine to steal up from within the arm, filling out the wrinkles and mummification, turning the skin a rich shade of near-purple, streaked through with hints of silver.

“Must not have had cancer,” Max said.

Jerry, still hunched over the open grave, sighed and straightened up, stretching his back. “We have a winner, folks. Another meat sack with the right stuff.”

“Yeah,” Max said. The process would work, and Max knew the law. He and Jerry would put Lucinda something in a bag, put the bag in their truck, and drive her to the nearest intake center. They’d put in a body, and presto-chango, out the other end would come a plasticine astronaut with enough programming and sense to ride herd on a colony ship; the dead watching over the sleeping. Thousands of colonists and others with a one-way ticket away from Earth, a planet which might need the Nystrom Process itself before much longer, on their way to a planet that might be one of many new homes for humanity, or the only home, or nothing at all. From what the news said, or didn’t say, someone up high was probably picking potential colony sites by throwing darts at star maps. Not that it mattered; with 11 billion people, humanity could afford to throw away people by the thousands for a good long while.

And at the controls of every ship, a blue and silver machine, made from nanotech and the best design anyone ever saw for an autonomous biped. We can’t design one, but we can sure as hell mass-produce it, Max reflected.

Jerry offered a hand, and Max tossed him the hoist rope that was tied to the harness he’d quickly fastened to Lucinda’s coffin. Jerry tied it off, and after helping Max out of the grave, he and Max quickly got Lucinda something and her splintered bed out into the night. They loaded her in the work truck, and got the backhoe squared away on its trailer. The government was still paying pretty well for viable bodies, and one a night was enough to turn a profit for now. Max didn’t see the need to fill his waking hours with work anymore.

The tailgate slammed, and Max stopped for a moment to stretch his back and look up into the sky. Light pollution wasn’t too bad if you looked straight up; he could easily see the Milky Way, and a spattering of light points across the sky like dew on the darkness. Occasionally the briefest flash could be seen from the orbital docks, and Max knew if he looked long enough, he might see a launch, a gasp of hard particles sleeting down as another one of the undead—impervious to radiation, temperature or boredom—dragged another boatload of colonists into the deep.

“Want a cigarette?” Max asked as he lit one of his own. Jerry laughed.

“Not one of them federal cancer sticks.”

“Nah, these are bootleg Camels. Been saving them for my best tumor days,” Max said. He held one out to Jerry, eyes still searching the heavens. The stars used to be so pretty.

Jerry took one. “How long?”

“What happens if they find a cure before you croak?”

Max laughed, a bitter sound in the warm spring air. He tore his eyes away from the sky and looked squarely at his partner.

“There’ll be no refuge from the stars anymore,” he said, and took another drag, relishing his freedom.

Brandon Nolta is a writer, editor, and professional curmudgeon living in the transportation-challenged wilds of north Idaho. After earning an MFA, he went slightly mad. That didn’t go anywhere, so he gave it up and started working for respectable companies again, which he still does on occasion. His fiction and poetry have appeared in Stupefying Stories, Digital Science Fiction, The Pedestal Magazine, Every Day Fiction, Perihelion, and a cacophony of other publications. Iron and Smoke, his first novel, was published by Montag Press in January 2015; he has yet to admit to a second. 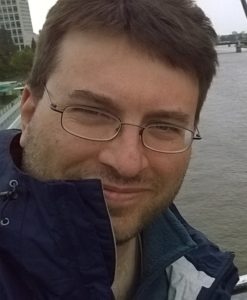