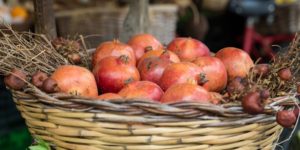 The Grand Bazaar of Agratha, fabled capital of the Zethyrean Empire, had been busy since dawn, yet it was nearly noon when the farmer saw his first customer, a stranger who paused before the farmer’s stall.

“Good morrow, sir!” exclaimed the farmer. “I see my wares have tempted you.”

The man was clothed in a grey, brine-flecked cloak, its hood casting all but a hawk nose in shadow—overdressed for the late spring day. The hood turned from side to side before regarding the farmer. “What are you selling?”

“Ah! By both speech and garb I take you for a visitor to Zethyrea! Come sample the punica, a delectable fruit that grows only on the cliffs along the Bay of Shattered Isles.”

A faint glimmer of a wolfish smile appeared from the depths of the hood. “Your groves are along the bay? I thought the city of Agratha has been closed to outsiders.”

The farmer nodded sadly. “Alas, the Rotting Bane. It has ravaged the countryside, a grim tariff-taker exacting its due, one of every three in each town, village, and stead from Spearhead to the gates of Agratha.”

“But not the city itself?”

The farmer pressed a hand to his heart. “Gods be good. The Emperor in his wisdom has shut the city gates. But the people must eat.” The farmer held up a russet globe with pride. “The punica. A hardy fruit. It can survive even the harsh climate of the basalt cliffs along the bay, and can be stored for weeks without spoiling, yet when you slice through its tough skin, you will find a constellation of delicate ruby stars glistening with the most ambrosial nectar.”

The foreigner’s laugh was a dark whisper. “A poet for a farmer! Your tongue would add flavor to the dullest repast. But you still have not explained your presence here on this fair day. Does the city not fear the plague bearers?”

“Ah, yes, the strangers who wander into towns in the middle of the night in search of lodging, their jaundiced and purple-scaly flesh unnoticed in the dark, only to disappear like a ghost in the morning light, leaving behind only their grisly blight.” The farmer shook his head and chuckled. “The Emperor is not given to the superstition of peasants. They kept me in quarantine for three days, which the wisest of physics agree is how long it takes for the affliction to show. My crop and I were allowed inside only this morning.”

The foreigner glanced over at the other farmers, whose goods were being snatched up by eager buyers.

“They arrived three days ago,” the farmer explained. “Yesterday no one would touch their produce; by sunset today they will have sold every rotten leaf for a princely sum. For those who make it inside, the Bane is a windfall. But first you must meet the approval of the locals, who will not deal with anyone they suspect of carrying the Bane, and they suspect everyone who has not been here at least three days.”

“Three more days?” said the stranger. “I do not understand. Do they not know about the quarantine?”

“They do. But they do not trust the gatekeepers, who may be bribed to let someone in early.” The farmer appraised the stranger. “Surely this idea is not foreign to you?”

The faint gleam of the stranger’s smile disappeared within the shadows of his hood. “Indeed not.”

“Forgive me if I offend, sir,” said the farmer. “I did not mean to imply—”

The foreigner held up a hand to stop him. “No offense taken. But tell me,” he leaned forward and whispered, “how can you be sure that I am not a plague bearer? Perhaps the Emperor’s ban has made us wily.”

The farmer stared at him for several heartbeats before laughing so hard his belly shook. “Gallows humor! Delicious! Here, sir,” he held out a shiny fruit. “At no cost—if you do not suspect me in turn, of course.”

“Not at all,” said the foreigner, pulling a coin from out of his cloak and pressing it into the farmer’s hand in exchange for the fruit. “But I will pay. Perhaps my example will whet the appetites of others. Good luck to you, sir.” He turned and disappeared into the crowd.

“And you as well,” murmured the farmer, as he scrutinized the coin in the morning light. Its face was so worn that its provenance was beyond guessing.

Night had fallen when a cloaked figure entered quarters on the second floor of the Slaughtered Sow, an inn and tavern abutting the harbor in Agratha.

A hood pulled back to reveal a lean, clean-shaven face with a hawk nose and penetrating eyes. Sitting down at a table, he took up a quill and a small slip of parchment and began to write.

In A. C’s man proved reliable. Entered despite quarantine. Business to be concluded in two days. Will write upon leaving for X.

The man folded the slip, dropped a bit of wax upon the seam, and pressed a signet-ring upon the seal. Sitting back, he stared at the candle for some time before pulling a punica from inside his cloak. He examined it in the candlelight, then, placing it upon the table, he split it neatly with a dagger, picked up half, and examined its contents. Nerveless fingers dropped the fruit as his face turned to ash.

The seeds within the thick rind were not ruby but onyx, and the aroma that filled the room was not sweet nectar but the charnel reek of the grave.

Death had come to Agratha at last.

Arthur Bangs has been a lawyer and a collector of degrees; he currently teaches English at a New York City public high school and lives with his wife and two cats in a tiny apartment on Manhattan’s Upper East Side. If you enjoyed this story, you might also enjoy his earlier story, “The Mission,” which appeared in SHOWCASE #3. 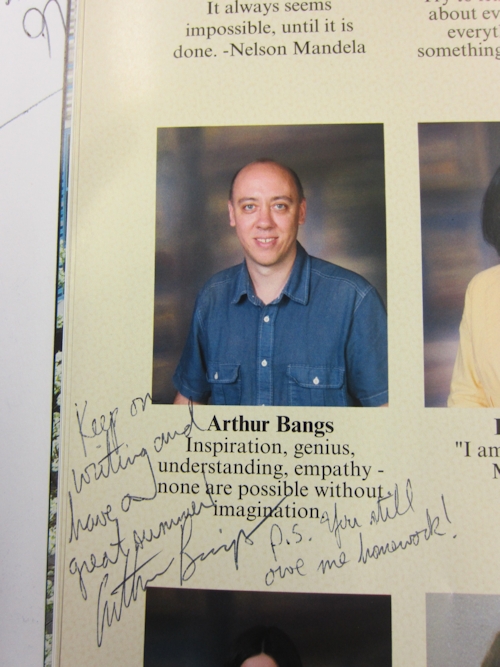