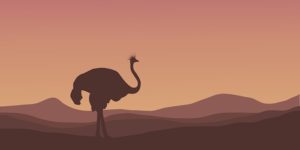 She was a funny looking bird, Alona thought. A big thing, like an ostrich back home, but her sprint was more a rough tumble due to one leg being somewhat shorter than the other. So Alona called the bird Odd-Leg, and it stuck.

There were dozens of plainsrunners in the enclosure awaiting transport to Earth for study, all grouped together, all varying browns and greys like everything else on the planet. Not Odd-Leg, though—with her blood-red feathers and bright green plumes cresting her head, she stood apart.

Just like Alona. She was shorter than others her age. Too many freckles. Hair too curly, eyes too small, face too long. She’d learned years past not to rise to the other kids’ taunts. “Excess anger is a product of mental instability brought on by lack of genetic modification;” that was Mr. Roberts’ mantra, one he delighted in reciting to her, especially when she became frustrated with his habit of slowly repeating instructions for her benefit alone. Other kids in the class would snigger and whisper behind their palms. Alona was certain that Selective Trait Assignation or no, if they were treated that way they’d be angry, too. But only her anger was unjustified in their eyes.

That evening, after school, the cold grey walls of the colony prefab that passed for a home felt closer than usual. She asked Dad again: “Why did we have to come here?”

Not that Earth was perfect, but at least there were more Naturals around.

Alona cringed. She hated Loni; the way it swung up at the end sounded so diminutive to her ears.

“I don’t understand. If so few people can do your job then why do they hate us?”

“Honey, they don’t hate us. They’ve just… forgotten how to see things any other way than theirs.”

Alona rolled her eyes. She saw the way people reacted when they walked through the colony together—how their pitying gazes would pass over her face before turning sour upon Dad’s. Gazes filled with implications, as if he and Mom had been the most selfish people alive. But Mom had taught her about Cicero, Shakespeare, Hawking, so many others. If it was good enough for them… she had always said.

Mom would never have ignored them.

“You’re a coward,” Alona said. “You dragged us out here because you couldn’t stand being at home without her.”

She grabbed her pack and let his withering protestations fall on her back.

She let the door slam and walked out into the dark. Anything for one more Oregon sunset, she thought. Here the sun only lit up the world’s flat grey landscape for five hours at a time, and the plains-dust never settled for long, leaving the colony entrenched in a low-hanging murk. Unseen in the distance, a group of plainsrunners screeched high and clear.

Alona threaded her way through the tangle of gunmetal grey warehouses and prefabs, murky floodlights guiding her steps. Once at the plainsrunner enclosure, she ducked low under the gaze of the gatehouse and hopped from one blind-spot to the next.

The flock were hunched close together at the far end of the enclosure, forming a sleepy mass of dirty-brown feathers and plumes. All but Odd-Leg, who slouched a few feet away from the rest, her long, crooked neck laid out flat on the ground.

Alona approached the chest-high fence and whistled a soft tune. All at once the solitary bird rose on unsteady stalks and scrambled across the dirt.

“Got something for you,” Alona said as she retrieved a plastic box from her back and removed the contents.

Between her fingers she held the mottled burrower, its six legs and antennae twitching and scurrying against the air. Odd-Leg’s blue-ringed eyes widened, and she snatched the bug away in her large, curved beak. Alona snapped her hand back; she still had marks from where that over-eager beak had dug into her flesh two weeks past. Odd-Leg happily tossed the burrower in the air and caught it again before swallowing the thing whole.

The bird leaned her neck over the fence and rubbed her head against Alona’s arm, cawing softly. Alona stroked the bird’s plumes back and sighed.

“They’ll be taking you away soon.” The supply ship was due in a week.

The bird let out an insistent squawk, and butted Alona’s shoulder so hard that she teetered on her feet and grabbed at the fence for purchase.

Alona laughed, and slipped her hand into her pack for another burrower. “Alright, alright. You know how to get what you want, huh?”

Slumping down against the fence, Alona closed her eyes and listened to the bird happily crunch the bug down. She’d miss Odd-Leg. Back on Earth the bird would be nothing special, but here amongst endless murk she lit up the air like a firestorm. A tiny spark, perfect in her own way.

It made her remember Mom: You can’t design sparks, Loni; all you can do is strike the flint and let them fly where they may. The bird cocked her head and clicked her beak—if she were unhappy about being so different from the other birds, she didn’t show it.

Alona had never understood what Mom had meant until that moment, never grasped the sacrifices Mom and Dad had both made so that she could fly where she might. Suddenly her own rash words to Dad caught up with her.

Alona stood up and stroked the bird’s long neck. “I guess you’ll be okay.”

She knew she would too.

Alona turned and made for home. Dad deserved an apology.

Danielle N Gales is a writer from Sunny Hastings, UK. When she isn’t reading or writing speculative fiction of all varieties, she spends too much time playing video games and drinking way too much coffee. Her fiction has appeared in Dark Fuse, Kazka Press, Kzine, and Bards and Sages Quarterly.