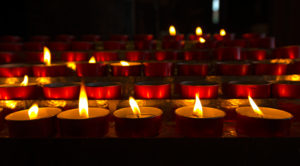 In the twelve years since I took up position as assistant to Monsignor Armand at Holy Cross Church, Govan, I had become used to hearing confessions on a Monday night. It being the first Confession of the week, we would habitually view a queue of well-wishers seeking absolution of the trifling affairs that meditated on their souls, and Mgr. Armand, being a year off his retirement, lacked the energy to endure the full queue. Therefore, in return for my praises spoken to the diocese (and hope for a promotion in the near future) I aided the elderly priest. Besides, the task was quite enjoyable, my late mother had invested in me a great interest in local gossip, and hearing from the confessionary box often produced enough of that. We got in all sorts, as I say, from the vulnerable to the hypocrite. But here is where the elephant sits in the room. I still recall that wet August evening when an element of a supernatural nature arrived on the scene.

I might have got the suspicion that things were amiss from the moment that Mr. Anderson entered the confessional booth. His movement seemed akin to that of someone who was learning how to move around in their own body for the first time, and of course, Mr. Anderson was sixty years old. His immediate confusion at the simple nature of the door and seat, which I could see from my perspective, though he could not see me due to the cloaked window, seemed to suggest serious issues. Drunkenness might first come to mind, though Anderson was known throughout the parish for his views on all things the “devil’s drink”, and was not even known to drink of the Communion Wine. A stroke or likewise illness lingered further on my mind, yet the whole thing seemed off.

“Bless me, Father, for I have sinned,” he said, finally working out the correct way to sit on the chair. “I am in need of great help.”

“You know the Church is always willing to help you,” I said, aware I could easily mean as much the spiritual sense as the physical.

I got a good look at his eyes for the first time. They seemed glassed over. He didn’t seem to have had a stroke—I looked out for the tell-tale signs—but Anderson didn’t seem to be in control of his own faculties. Maybe he had turned to drink, but what could have caused that Damascus moment?

“I don’t understand. You only live in the next block?”

“No.” His answer seemed to shake the confessional box. “I’ve come from much further than that.”

The answer was matter-of-fact in its response, but shook all my preconceptions about the matter in hand.

His eyes looked at me, as if pitying one who couldn’t understand the bleeding obvious.

“I mean I’ve been happily dead for over a century, and now I’m suddenly stuck in this chap. And would like help getting out.”

Exorcism was not a new idea to me. Within the church, it is an accepted idea that ghosts and demons exist and we have our own exorcists who deal with them when they are exposed to humans. For all I knew of the subject, which arises from some controversial conversations with many of the parishioners, this was the first time, I believe, in recorded Church lore, that a ghost had come to any priest asking for help in being exorcised. I wasn’t fazed, though. The church must, if it is to adapt, deal with new precedents.

“Of course I’m in bloody pain!” he said. “What kind of a question is that? Of course I am! I’ve been bloody possessed by a human, that’s not exactly fun and games, is it?”

I played for time; humming over a thousand Holy platitudes in the hope that he wouldn’t notice I was wracking my brain for an answer to this issue. It’s not something one gets prepared for in life, not in my walk of it.

“What time did you die at?” I asked. Well, I had to say something.

“I see. But, tell me…” The words came to me as I spoke. “Between that time and now, have you had any form of conscience? I mean, did you know what was going on? Or did you fall asleep in 1910 and wake up over a century later?”

“Ah!” Now it was the turn of the possessed chap to pause, his face confusing as he tried to come up with an answer. “Good question. I feel like I have been watching events since the moment I ceased to be. But not from any spot in which I could pay much attention to them. It was like I was watching a recording from afar, but without participation. Sort of like a dream. I don’t think I experienced over a hundred years at a walking pace, hour by hour, day by day, month by month. But I did wake up a few weeks ago with the full knowledge of a century of errors and news stories as if I had been dreaming them all the while. Of course, given that the last thought I could feel having existed through was my last breath, the fact that suddenly I was breathing again was a bit of a shock. I wondered if perhaps the doctor, who was a great one, had saved me, but then I opened my eyes and saw an alien environment masquerading as a bedroom. It was the biggest shock in my life—I could have died, if I wasn’t already dead.”

“There are more things…”

“Please do not quote Shakespeare at me. I came here for help, not dialogue.”

I looked at the man, offered a prayer to St Anthony (the patron of lost things), and looked back at him. His appearance seemed to change, he mellowed—and then screamed, and ran out of the room. Mr. Anderson stood where he was, perplexed.

“Did someone leave us just now?” Mr. Anderson asked. Looking about him, added. “Sorry, I thought I was asleep. I appear to be in church.”

Michael S Collins was born in a building since demolished in a universe thankfully still standing. He was formerly a Fortean Times book reviewer, and has written for markets as diverse as Diabolic Tales III and the Doctor Who fan magazine Celestial Toyroom. Michael lives in Glasgow with a daughter and one wife, but no pet llama…yet.