Fiction: “The Real Reason Mrs. Sprague Came by Her House So Cheaply,” by Karin Terebessy 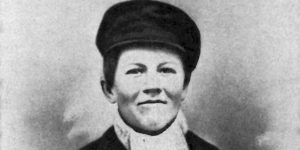 Mrs. Sprague paused in front of the china cabinet when she heard a thunk.

“What was that?” she called into the parlor. “Boys?”

“Nothing, Mrs. Sprague,” they sang back in unison.

Mrs. Sprague let out a tense breath and headed toward the noise when a knock on the kitchen door forced her to pivot on her heels.

She opened the door a crack. “Yes?”

On the doorstep, a white-haired man in a three-piece suit ballooned up his chest. “I come from the past,” he proclaimed.

“Who doesn’t?” Mrs. Sprague snipped, and started to close the door.

“But I’ve just traveled through time,” he said quickly.

Edison thrust his thumb over his shoulder. “You know you’ve got a vortex through time in your back yard?”

“Yes.” She threw an impatient glance toward the parlor at the sound of another thud. “Now if there’s nothing more I can do for you Mr. Edison, I have company…”

He tried to peer over her head. “Afternoon tea? I sure could go for a bite,” he mused, rubbing his stomach.

“Yes, well, maybe some other time…”

“I can’t,” she said, feeling a bit badly. “Tehlasintha,” she mumbled.

Mrs. Sprague straightened. “I said, ‘Tesla’s in there.’”

Edison went red in the face. “Why that—” He lunged for the door as Mrs. Sprague tried to shove it closed, trapping his arms and one leg on the kitchen side, where he thrashed them about like well-dressed worms.

She was in the midst of kicking his foot and swatting his arms when Einstein wandered in, regarded the scene, and proceeded to moon about as if nothing were amiss.

Einstein blinked. “Shall I put the kettle on?”

A crash came from the other room, followed by a roar of laughter. This distracted Edison for a moment, and Mrs. Sprague slammed the door shut and locked it.

Einstein plucked at his trousers. “I don’t know where your kettle is, Mrs. Sprague.”

She shooed him away and hurried to the parlor, just in time to catch the lamp Ptolemy knocked over.

He had Copernicus in a headlock. “Not so tough without your boy Kepler here to back you up, are you?”

Copernicus responded with a rebellious gurgle.

“Admit my system works just as accurately as yours does to the naked eye!”

Mrs. Sprague tried to wedge the astronomers apart but lost her balance and stumbled backward into the bay window wall, which had been completely graffitied with squiggles, lines, arrows, and right angles.

“Who did THAT?” She sputtered.

Mrs. Sprague whipped around. Richard Feynman twiddled his thumbs and stared at the ceiling. Then began to whistle.

Ptolemy and Copernicus crashed into an end table, ricocheted off the couch, landed on the floor, and resumed wrestling, Copernicus cowering beneath a hail of noogies.

“For heaven’s sake!” Mrs. Sprague screeched, “Why can’t you boys be more like your friend Godel!”

Feynman pointed into the corner of the room. “He’s been hiding behind that bookcase for three-quarters of an hour!”

Godel started when all eyes turned on him. “You don’t see me,” he declared, as he waved his hands like a magician, flattened himself to the wall, then tried not to move.

A clod of soil came flying at the bay window.

Edison had circled round and stood menacingly in the backyard, palming another handful of dirt.

“You tell that charlatan to get out here!”

Tesla ran to the window, just as Edison threw the second dirt clod. It fell to the ground, ten feet short of the house.

“Your aim’s as weak as your current!” Tesla yelled.

“My current’s just as good as yours!”

“Your lamps are lame and inefficient!”

“Don’t you cast aspersions on my lamphood!”

Franklin took bets. Feynman sided with Tesla. Godel pretended to be invisible. And Pascal considered the options. “Put me down for both.”

“You can’t wager on both of them, Pascal!”

“Pretty sure I can,” Pascal said, utterly nonplussed.

Mrs. Sprague rapped her knuckles on the window. “You cut that out right now, Thomas!”

Edison dropped his dirt clod and hung his head.

She whipped around to Feynman. “And you! Get the cleanser from under the sink and start on that wall.”

Feynman scuffed his toe into the carpet. “Yes, Mrs. Sprague,” he moaned.

“Tycho Brahe? I got that from a hooker once in Paris…” Franklin mused

Einstein blinked stupidly. “Was I supposed to be getting the tea?”

Mrs. Sprague pinched the bridge of her nose. “I never had this problem when Marie Curie and Jocelyn Bell were here,” she muttered.

Mrs. Sprague threatened him with a look and trudged to the kitchen. She let out a cry when Edison’s head popped up in the window.

“Schrödinger’s out back,” he said.

She yanked the curtains shut.

Pascal peeked his head in the kitchen. “Ben’s trying to get Albert to drop an A-bomb.”

Mrs. Sprague smoothed back her hair and took a steadying breath. She reminded herself that every healthy scientist is a blessing. That there were some people who had no scientists at all. Then she headed toward the parlor, wondering vaguely when (or if) Schrödinger would appear. Nursing a strong suspicion he’d be swinging a dead cat. Like Huckleberry Finn.

Her most recent appearance in our pages was “Mood Skin”, last April, and her next will be “The Memory of Worms,” in October.

2 Responses to Fiction: “The Real Reason Mrs. Sprague Came by Her House So Cheaply,” by Karin Terebessy