Fiction: “Everyone Goes into the Pumps Eventually”
by Stephen S. Power 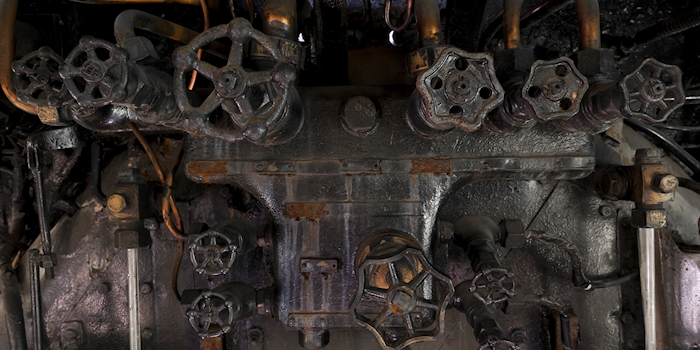 When pump #12 sputters and the needle on its pressure gauge drops out of the green, Smuthagill sighs with relief. He checks the time: fifteen minutes till his shift is done. He shouldn’t need more than five.

Smuthagill hadn’t wanted to be a prentice of the pumps. He hadn’t wanted to be a prentice of anything. He would have been happy with fieldwork and a bit of filching to support his girling and dicing. When he was born, though, his mother had needed to pay the rent, so she’d sold his soul to the pump house, delivery on expiration. When he turned thirteen she sold them his body too. It was really hers anyway, she reasoned, on loan from her own.

The day he went into the mountain, she said he’d learn a good trade, move up the ranks, maybe become a pneumatic himself, and they were just below the mancers, but after two years Smuthagill had made certain he’d learned nothing. He didn’t care how souls left the crystals to motivate the pumps. He didn’t care why so many pumps were needed or what was so intriguing deeper inside the mountain. All he wanted to do was keep the simplest of prentice jobs: slotting the pumps, which usually meant warming a stool.

Smuthagill unlocks the iron bin built into the stone block wall and reaches behind a tray of live crystals for the blue one he tucked there two days ago. He tosses it on the counter, heads for #12, then returns for it. His supervisor might check on him. His relief might come early. He can’t take that chance. Chance is what made him hide the crystal and stare from gauges to clock and back for the last three shifts.

Chance wouldn’t have if Smuthagill were paid in something other than experience. Because that can’t be laid or bet, Smuthagill didn’t need much convincing when Lapardi outlined his scheme in the prentice yard one day.

When it comes to toil, Lapardi said, all souls are created equal, the mancers have proven that, but some people won’t believe it. They think a soul from a blue crystal works longer and harder than one from a yellow. Or a soul that flickers orange is more pure, whatever that means. It’s all nonsense. The crystals have no more effect on a soul than a bucket has on its beer. But where there’s nonsense, there’s a market.

Four guilders are better than none, so Smuthagill accepted. It isn’t much, week to week, but today it’s everything.

Smuthagill ungears the pump, removes a dead white, slots a live yellow from his pocket, and regears. The pump whooshes back to life.

At the gauge station he fits the live blue into a slim brass capsule. Behind the glass viewing port it looks like an eye with an orange flicker for a pupil. He wishes there were room for both crystals. He lifts the thick leather flap on the brass pipe that runs up the wall and inserts the capsule. A flow of air sucks it slowly up to Reclamation.

Then he opens the log on the counter, subtracts one from the count of crystals in the bin, and notes the pump, pressure, and reclamation time. Twelve minutes left, and all is well.

The wooden door behind his station is locked from the outside, so he peeks through the wicket. He can’t see his supervisor, who endlessly stalks the halls connecting the pump rooms. The pumps make little noise, just a slow and steady whoosh…whoosh, and Smuthagill can’t hear him either. Good. He drops the dead crystal on the flagstone floor and grinds it under his heel. It won’t grind.

Things are always easy until they have to be.

Smuthagill is searched inside and out after every shift, and the pump room is swept periodically to make sure no one’s caching crystals for later retrieval. The guards should search him before his shift, too, but who’d bring crystals into the pump house?

Smuthagill wonders who Lapardi pays to take the crystals out of the mountain. Probably one of the guards who searches him. They don’t earn much either.

He grinds the crystal harder. It only bores into the sole of his boot.

Smuthagill takes a sledge from the tool chest under the bin and whacks the crystal. It doesn’t scratch. He’s never known one so tough. Usually they’re as easily pulverized as glass. He can’t understand it.

As his mother said when she put him over her knee, “The biggest problem can’t survive the biggest hammer,” so Smuthagill smashes the crystal harder. This time it shoots away like a grape from its skin, flies under the counter, skitters into the array of pumps and disappears.

Smuthagill stares under the counter. #10. He’s positive. He stands up. Or is it #13? Something about the countertop blocking his vision for an instant makes all the pumps look alike, squares of iron painted orange with a wheel enclosed on one side and a piston enclosed on the other. He checks the clock. Ten minutes to go. Scattering the crystal’s dust won’t take a moment. Plenty of time.

The door handle rattles. A key slides into the lock. Supervisor Vantz looks in.

“What are you doing with that sledge, prentice?”

Smuthagill looks at the sledge. “Stool’s coming apart. Pounding its legs back in.”

“Perhaps you should spend more time on the pumps and less on the stool.”

“And when you have visitors, prentice, make sure they arrive after your shift. We can’t have people lurking in the yard.”

“Yes. Three men. Large men. Not the company a prentice should keep.”

Vantz relocks the door. Eight minutes. Leguc has the next shift. That prentice loves the pumps. He’s never late. And never anything but happy. Not the sort of person one could trust to help cover something up.

Smuthagill runs to #10. He peers under the half with the motivator and crystal array, which is raised an inch off the floor for ventilation. He can’t see a glint or a silhouette. He gets a stiff wire from the tool chest and drags it under the pump. Nothing.

He does the same to #13. More nothing. Six minutes.

He’d leave the crystal wherever it is and let Leguc take the fall, except no one would believe Leguc capable of something underhanded. And Smuthagill couldn’t do that to him. Everyone goes into the pumps eventually, but no one deserves to be sent there.

He goes pump to pump as far he imagines the crystal could have rolled, then goes a few pumps more. Four minutes. He returns to the station to get a fresh look at the room, and that’s when he sees the crystal sitting like a shiny egg right in the middle of the floor, right where he hadn’t looked, right before he kicks it.

It bounces back under the counter, heads for the gap beneath the door to hallway and is saved by the leg of the stool. He can’t believe his luck. He grabs the sledge to give it another whack when the key turns again.

Smuthagill steps on the crystal and pivots to face the door.  Leguc pushes past Vantz like a puppy.

“Oh, no,” the boy says. “The clock’s been sticking lately. Look.” The prentice puts the stool beneath the clock, stands on it and taps the face. The arms flick forward several minutes. The clock softly tolls the hour. “See? Right on time.”

Smuthagill gives a pained smile and grinds the crystal. It doesn’t shatter. It does, however, become embedded in the sole of his boot. Smuthagill’s smile reaches for sincerity.

Smuthagill turns literally on his heel to avoid dislodging the crystal and tosses the sledge into the chest. Then he follows the supervisor into the hallway, Vantz locks the door, and they take three steps toward the guardroom, where Smuthagill will strip and squat, before Leguc bangs on the pump room door. He shouts through the wicket, “Supervisor!”

When Vantz turns, Smuthagill scrapes the crystal loose and nudges it into a crack at the base of a wall. In the hallway’s dim light it won’t be found for days. Nobody will know which pump room it came from. And there might not even be an investigation. The trade in used crystals is small.

Smuthagill relaxes for the first time in days. He’ll get his money from Lapardi. He’ll handle the men outside. He’ll sleep well, perhaps not alone.

Or not so well. Vantz jams his key into the lock and says, “Prentice, with me.”

Smuthagill thinks about running till he sees the two shadows peeking out of the guardroom. Their glowing eyes flare with curiosity. He goes into the pump room.

“The pressure in #12 is very low,” Leguc says. “Prentice Smuthagill just replaced a crystal. (I checked the log).”

“I know. But #12 motivates the pneumatic flow in the reclamation pipe. It’s still so low, this must have stalled in the pipe, then fallen back when Prentice Smuthagill tossed the sledge into the tool chest. (See? The chest is sitting against the pipe.) I found it poking under the flap.”

Leguc opens his soft, little hand to reveal a capsule.  An orange glow flickers across his palm.

As Vantz grabs Smuthagill’s arm and Leguc goes pale, realizing what he’s done, Smuthagill sags onto his stool. He wonders whether he’ll have as warm a glow when the crystal with him inside it is plugged into a pump.

Stephen S. Power’s novel, The Dragon Round, was published in July by Simon & Schuster. His short fiction has recently appeared at AE, Daily Science Fiction, Deep Magic and Flash Fiction Online, and he has stories forthcoming in Amazing Stories and Lightspeed. He tweets at @stephenspower, his site is stephenspower.com, and he lives in Maplewood, New Jersey.