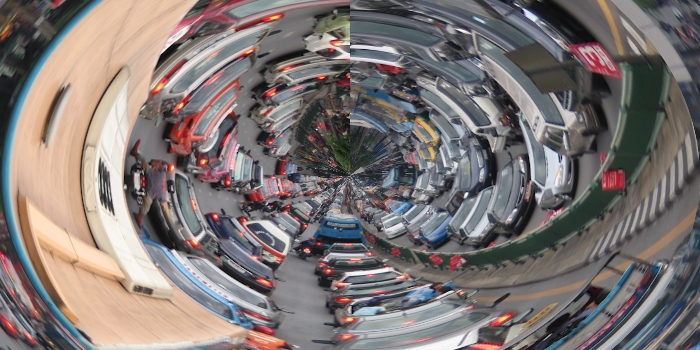 “From a traffic camera on the 405,” Carly’s father said. “Must have been right after your so-called study session.”

If Tom Paden was angry, he didn’t show it. He was smug, resting the screen against his forearm like a host trying impress with a mall gallery watercolor. Carly looked to her mother for help, but Sharon Paden was suddenly fascinated with a carpet stain, leaning precipitously over the spot as if she was hoping to fall in.

Carly steadied her voice. “Dad, it was a study session. We didn’t even take the 405. We went to Shelly’s. Hence, me here. Still alive.”

But it was hard to argue when there on the screen was her boyfriend Rudy’s Corolla, crumpling against a freeway divider as the glass shattered outward like a line of sea foam. Inside, a few vaguely human figures jounced to and fro as a crack spidered across the windshield.

“I’m very glad to hear it,” Paden said, his voice rising just a little. “Because if you hadn’t gone to Shelly’s, there’d be a damned good chance that she, Rudy, and that goofus from your math club, what’s his name?”

“Brandon. All dead. And as for you…” His voice cracked.

Carly tried to sound concerned, but the question emerged like the world’s worst line reading. “What about me, Dad?”

“They don’t know for sure,” he said. “You’re still in critical condition.”

“Oh.” Carly glanced up at the screen, at the violet blur of her sweatshirt as she was tossed into the front seat. “Can we turn that thing off now, please?”

“I think I’ve more than made my point.” Paden tapped the screen and the three of them relaxed slightly as the gruesome scene flickered and went dark. “Tomorrow you’ll tell Rudy that your studies and extracurricular activities are taking up too much of your time. If he’s as decent as you say, he’ll understand.”

Carly tried to stand in protest, but her stomach roiled and she sank back down to the sofa. “It was an accident, Dad. God, it wasn’t even our accident. You can’t slap rules on people because of someone else’s bum luck.”

“Bum luck?” Paden snorted and brushed a bit of imaginary dust off the screen with his thumb. “I’ve done my homework on that creep. Do you want to hear the numbers?”

“Last year, eighty-eight percent of proximate Rudies overdosed on a combination of alcohol and his mother’s Codeine.”

“Another eight percent were expelled from school for misconduct.”

He paused and Carly saw a vein bulging on his temple, branching out like a needlessly complex strip of road. She reached up to tug a strand of hair from her eyes. She’d dyed it purple just the other day and already her proximates were falling in line like a bunch of quantum sheeple.

“So what?” she said. “Just because a bunch of alternaworlds have it in for him doesn’t mean that this one does.”

“They rub off,” Paden said. “Just like bad friends. We can’t have you going around with boys who are statistically unsound.”

“Unsound?” she said. “Please!” But she stopped herself.

She’d had this argument before. All of her friends were having it. Since their parents had started subscribing to the stream, they’d turned from helicopter into teleporter parents, accessing endless reams of data from tangent universes, sifting dutifully through notices of academic awards and deaths, arrest records and web cam footage. It was neat at first, to see how things might have gone, but now everyone her age was hemmed in, judged by mistakes made in other lives. By other people’s kids.

That was how Rudy had described it. It was that night, over a month ago already, when they’d parked up in Bronson Canyon. Instead of making his move, he bent over the wheel and sobbed. That morning his father had stormed into his room waving photos of the wrestling trophy won by Rudy’s proximates. He called Rudy a waste, the biggest pansy-ass failure in the multiverse.

“I thought it was okay to fail.” Rudy wiped his face on the sleeve of his jacket. “That’s what they used to say. That you couldn’t learn if you didn’t.”

His face was blotchy and vulnerable, his brow etched with the kind of bad boy angst that made Carly’s heart lurch. And that’s when she made the decision, took Rudy’s hands and eased them gently under the soft cotton folds of her blouse.

“It’s not as bad as all that,” she said. “We can still screw up. We just have to get the jump on them a little.”

She still thought it was a good line. You sure as hell couldn’t seize the day anymore.

Carly stood up. It was hard. She was feeling a little queasy, but she managed. And Paden? He was still standing there, lips forming a stubborn line that loosened as he saw her expression, the dollar-store band around her finger.

“Rudy and I. We need to tell you something.”