Fiction: “Plum, Rose and a Hint of Musk”
by Mark Rookyard 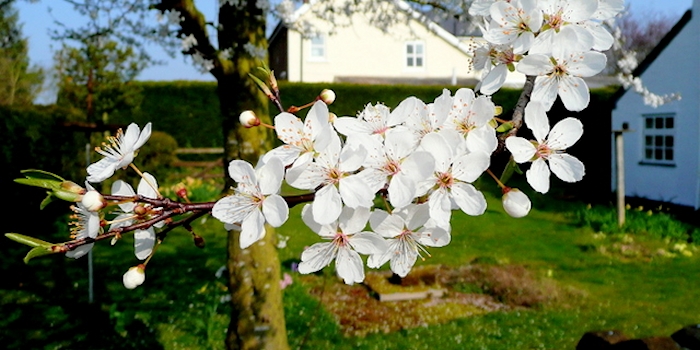 “I smelled Jennifer last night, while I slept,” Richard said, staring at the white ceiling.

The doctor nodded and wrote on his pad. “And what did she smell like?”

Richard closed his eyes. “Her favourite perfume. Plums and roses and the faintest hint of musk. It smelled so real.” He opened his eyes. The floor was white and the walls where white.

The doctor wrote some more, his legs crossed and the pad balanced on his knee. He looked at Richard over his glasses. “Did you dream anything else last night? Anything about the war, perhaps?”

Richard sighed. “You write the words, but do you even know what a rose is? What it smells like?” He gripped the side of his white bed. “For all I know, this room is the only thing you know.”

The doctor looked at Richard a long time before writing something else in his pad.

Richard lay back on the bed and remembered the smell of a rose.

When Richard woke, the doctor was still there, his notepad at the ready.

“We won the war?” Richard said.

“We won, Richard. Isn’t that all you need to know? But let’s talk about the invasion, about what happened in the war.”

Richard remembered the smell of burning, of oil, of fear. They had huddled on the ship, alien craft streaking through the skies above.

“I saw the door on the ship and wondered where it led. I told her to wait for me,” he said. His head hurt.

“I need to go back to her. She’s waiting. The ship, it was burning.” Richard’s breath was coming in short, sharp gasps.

“We’ve been through this, Richard. She is nothing. A programme. She exists only in the computer simulation. You were sent there to learn the history of the war.”

Richard remembered Jennifer smiling. He remembered how she would look into his eyes as they made love.

“A simulation,” he said.

“That’s right, Richard.” The doctor clasped his hands together. “It’s normal to be confused. The machine, it is very thorough. It has to be, if we are to learn of the war.”

“In the end,” the doctor said. “Though victory always comes at a cost.”

Richard looked around the white room. “We won, but we had already lost. Africa had fallen. Europe. And North America was all but lost. We were on the ship, fleeing, when I saw the door. I thought we could escape the flames, so I went to see where it led.” His head hurt. Jennifer had called something to him as he pulled the door open.

“We’ve been through this, Richard. Tell me about the war. We sent you there to learn. We are historians, you and I. We learn from the past.”

“That door,” Richard said, pointing at the only door in the room. It was white. “I’ve never seen you use that door. When I wake, I am either alone, or you are in that chair, waiting. Where does it lead?”

The doctor’s eyes were dark and bright. “Don’t do this, Richard. You’re not ready. Don’t be fooled by a programme you helped create. I’m here to help you.”

“Ready?” Richard held his head. “I remember now. When I opened the door on the ship, she called out my name. She wanted me to return to her.” He could see her now; she’d reached out a hand to him, people all around her screaming and looking up at the skies. “I could go back to her.” Richard looked at the door. “She called my name. My wife. Jennifer.”

“A programme,” the doctor said. “Created by you and I. We created it to study, Richard. To learn.”

“So tell me,” Richard said. “What does lie on the other side of that door?”

The doctor sighed. “The world, Richard. The world waits out there. We won the war, but it came at a cost. You aren’t ready yet. The programme still has its hold on you.”

Richard looked at his hands. They were stained with soot. He held them to his nose and smelled smoke, and was that a hint of plum and rose? “You know, in the war, we never did see the face of the enemy. Only their ships. I never heard of anyone who’d seen what the aliens looked like.”

The doctor turned in his chair. “That is good, Richard.” He looked at his notes. “And can you remember when the President fled the White House? How did that affect the people?”

“Through that door,” he said. “Will Jennifer still be there waiting for me?”

The doctor stopped writing. “The programme, Richard. Perhaps we made it too convincing. Once you are through this, I think we should look at it again.” He gestured to the bed with his pen. “Sit down. The effects will wear off soon and it can cause nausea when reality returns. I’d hate for you to fall and bump your head.”

Reality. He smelled his hands again. The rose was stronger now, as was the musk. Jennifer. She had called his name, wanting him to return to her.

He reached for the door handle.

Richard smiled. “Then it doesn’t matter, does it?”

He opened the door.

Mark Rookyard lives in Yorkshire, England. He likes running long distances and writing short stories. His newest stories are scheduled to appear in Metaphorosis and Third Flatiron’s Hyperpowers anthology in May.