When we launched the e-book version of Stupefying Stories, we included a “three years and out” self-destruct clause in the contract. Four years later that self-destruct clause continues to work as designed, so this is your LAST CHANCE to buy these vintage 2012 issues at special closeout prices before they go out of print, never to be re-released again. 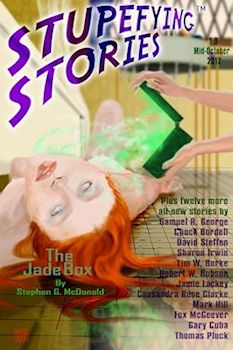 For 1.9 (a.k.a., the “mid-October” issue) we pulled out all the stops and turned the creepiness factor up to 11. Featuring another awesome Aaron Bradford Starr cover that deserves to be a poster, this one starts with the beautiful and elegiac “Between Life and Oblivion,” ends with “Going Out With a Bang”—a story that, as one reviewer put it, “puts the black in black humor”—followed by Thomas Pluck’s clever little exit sting, “The Old-Fashioned Way,” but in-between it’s full of spooks and specters, ghosts and ghoulies, and things that go bump! in the night. (Or sometimes not: check out Robert Hobson’s story.) In particular, if “The Florence” or “The Jade Box” don’t give you the shivers, you’d better check your pulse, because you just might be dead. 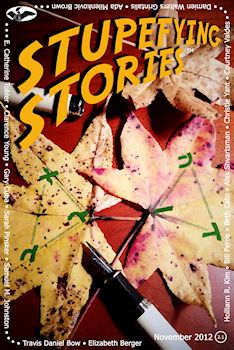 For this one I turned the Editor-in-Chief’s chair over to M. David Blake, who has been with us since the old Friday Challenge days and has served as Technical Director and Associate Editor of STUPEFYING STORIES from the very start. I gave him a budget and free rein to select the stories, as well as permission to experiment with the design, and I’m pleased to see that he picked some stories I would have picked—some I would not have picked—actually pinched a few from my production queue—and in the end, produced a book that is bigger, in some ways better, and definitely recognizable as a STUPEFYING STORIES book and yet distinctively different.

Good stuff. I liked it so much, I gave Mr. Blake the budget and permission to go ahead with STRAEON. This book should not be taken as a precise blueprint for STRAEON, but if you want some sense of how my editorial judgment and his editorial judgment differ—and we do differ; our tastes are at best similar, not congruent—then buy and read this book.

P.S. And if you’re wondering about the odd volume numbering: it’s an Amazon thing. We wanted to call this one 2.1 but ended up having to call it 1.10 for Amazon’s sake. 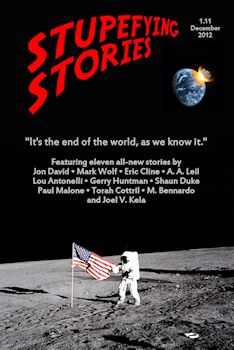 By the end of 2012 STUPEFYING STORIES had finished evolving from our initial vision of a publication that didn’t recognize genre labels to being a straight-up SF/F publication, and this book is the apotheosis of that development. It had also evolved from being an “anthology series” to being something that clearly walked, talked, quacked, and otherwise behaved like a monthly magazine, so we gave up trying to resist that label as well, and decided to let it become the monthly SF/F magazine it clearly wanted to be.

I am proud of every single story in this book, but especially so of “Moonbubble,” by Eric Cline.

Then again, if we were ever to adopt a story as a manifesto, it would be “We Talk Like Gods,” by Jon David.

Also available for the Barnes & Noble Nook. (Why not in the Apple iTunes Store? Well, thereby hangs a long tale…)