Fiction: “The Insufferable Triteness of Beings”
by Christopher Allenby 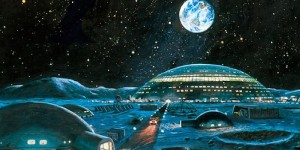 The open doorway to the Jade Tortoise Room loomed before me, and I wanted to be anywhere but here. A State Security checkpoint was set up immediately to the left of the doorway, so I presented my passport for the third time since registering at the hotel desk the previous evening. Inside, a huge banner on the wall behind the small elevated stage proclaimed what everyone here knew already: “WorldCon 100: LunaCon I.”

Naturally enough, the event had been dubbed “LoonieCon” as soon as the location had been announced. I’d referred to it as such myself in an editorial—one in which I criticized the WSFS for locating its convention at so exclusive a destination, no matter how appropriate—long before I had any notion that I would attend.

The meeting room was half-full at half an hour before the panel discussion was to begin. I headed to the stage, wending my way around banquet tables, shuffling my feet carefully to prevent bouncing in the unfamiliar gravity, and smiling and nodding at writers, artists, scholars, and fans—most of whom did not know me nor I them. More than once I felt for the name badge that was pinned to my lapel. The badge read “Eric Renshaw, Editor, Circumlocutions.” Once on the stage—after hopping gently up to its elevated surface without flailing or, worse, overshooting—I found a place card that matched my name badge and sat to watch the room fill.

The Chinese government had bid furiously against several other municipal and national governments to host this special one-hundredth WorldCon: the convention of the World Science Fiction Society. The United States had aggressively sought the contract for New York since the inaugural 1939 convention had been held there; the city wanted to make of it a centennial celebration. The Chinese, of course, had the better carrot: a convention hotel in the first lunar colony. My fellow science fiction enthusiasts couldn’t refuse such a romantic locale, and I hoped that sightseeing would make attendance at this panel discussion unattractive. I was tempted to forego the discussion myself, Gedanken-like, but had neither the nerve nor the personal clout to pull it off.

I was invited to the convention and specifically to this panel discussion because in last December’s issue of Circumlocutions I had published a controversial story by the pseudonymous Ruprecht J. Moore entitled “The Insufferable Triteness of Beings.” Since that publication, the story has been the subject of at least three critical essays and dozens of reviews in the literary journals and blogs. Because of the author’s anonymity, the WSFS had invited me as editor and stand-in on this panel, “Polemics of R. J. Moore’s ‘The Insufferable Triteness of Beings.’” I did not expect a pleasant experience.

With fifteen minutes until the discussion was to begin, the room was filling quickly. I could see no completely empty banquet tables, and the scowls directed at me from some of those I presumed to be academics were becoming worrisome. Did they think I was Moore? I tried to focus on the crowd as a whole, avoiding eye contact with individuals, and noticed several young, suspiciously fit hotel employees circulating among the tables and setting out pitchers of water for the attendees.

Dr. Alfred Milliard, a professor of Cultural Studies at King’s College, Cambridge, stepped onto the stage and extended his hand. “Thank you for coming, Mr. Renshaw. The society appreciates your willingness to make the trip.” Cultured British accent with a trace—imagined?—of condescension.

“It was my pleasure, Professor Milliard. I’m not sure I’ll be able to contribute much to the discussion, but the chance to see Selena-Beijing was something I couldn’t pass up. Thank you again for the invitation.”

“I hope you’ve reconsidered your position on the author’s anonymity?”

“I’m afraid not,” I said. “As I indicated, the author has been explicit about that. I’m contractually obliged to maintain confidentiality.”

“I see,” Milliard said. “You understand, of course, that we’re on Chinese territory here. Your confidentiality agreement has no basis in local law.”

“That’s really beside the point,” I said, feeling uncomfortable.

The lights then flickered once, the three other panelists converged on the table, and Dr. Milliard stood to welcome the attendees and introduce the panelists: me; Regina McGill, a writer whose fiction was highly regarded; Dr. David Rozhenko, Professor of Literature and Semiotics at UC Berkley; and Edith Hartwell, a professional literary critic who had written a blistering review of the “The Insufferable Triteness of Beings” that hit the Internet like a supernova and ramped up my circulation by nearly twenty percent, at least for the December issue.

Milliard said, “Welcome all. This is the panel discussion titled ‘Polemics of R. J. Moore’s “The Insufferable Triteness of Beings.”’ Those of you in the wrong room may now go find the session you wanted.” The crowd laughed politely.

“I know this story has evoked a great deal of discussion already,” Milliard went on, “but before we begin in earnest, I want to invite Mr. Renshaw to provide a little background—how he came by the story, why he happened to publish it, that sort of thing. Mr. Renshaw?”

And just that quickly, I was on the proverbial hot seat.

“The story came to the magazine through the usual electronic submission service,” I began, “submitted I think sometime in the late summer of last year. I remember that it was early Fall when I read it. I read it twice at that time and passed it to my assistant editor, Juanita Sanchez, for her opinion.”

From the audience, “Excuse me, Mr. Renshaw, but why did you want Ms Sanchez’s opinion? Don’t you make all decisions on what you buy?”

“I do make all final decisions, but it’s a team effort—not exactly consensus driven—but we work together to publish the stories we think are important. Anyway, she agreed that the story was unusual and that it probably should be published. Once the December issue was available, our editorial email in-boxes were inundated with inquiries about the story—more email than for any other story we’ve ever published, in fact.”

“But who is Ruprecht Moore?” Another voice from the audience.

“You can’t say, or you won’t say?” This voice was accusatory.

“Either. Both,” I said. “I contacted the author about the unusual correspondence and…”

“Mr. Renshaw,” called a new voice from the crowd, a woman’s voice, though I couldn’t locate her, “you must divulge the identity…”

Milliard cut in. “Please allow Mr. Renshaw to conclude his introductory remarks. We shall have opportunity for questions afterward. Thank you. Please go on, Mr. Renshaw.”

“I asked the author if he had any standard reply that I should make to the correspondents since they seemed greatly moved. He said, ‘No. It’s just a story.’ We began forwarding those emails to the author’s R.J. Moore email address…”

“But that address simply generates an automated response!” It was the woman’s voice again. She was now standing in the middle of the hall, four banquet tables back from the stage. She wore her iron gray hair in twin buns, in the fashion of a Star Wars character from more than sixty years ago.

“Really?” I asked, addressing her directly. “What is the automatic response?”

“It just thanks me for inquiring about the story and assures me that it means whatever I think it means. That’s infuriating.” She sat down, exasperated. “I want to know what he meant by it.”

There was a rumble of agreement from the audience. Angry agreement.

“Mr. Moore assures me,” I said, “that like Shirley Jackson’s ‘The Lottery,’ it’s just a story. What you bring to the story dictates its meaning for you.”

“Come now,” said Edith Hartwell. “‘Just a story’ is no response at all when the story is clearly an attack on the egalitarian status quo, a subversive manifesto promoting capitalist-individualist philosophies.”

I nodded as sagely as I could. “It very well could be, Ms Hartwell. I’m not sure.”

“What led you to think it should be published?” This from Regina McGill, beside me at the table. She winked at me, barely concealing mirth.

I shrugged. “I’ve made no secret of favoring open discourse,” I said. “Anything as unsettling as that story deserved to be published because of its ability to elicit such strong emotional responses—to make us think, to question. No matter what its politics.”

Milliard said, “I find the story racist and elitist, Mr. Renshaw. If it is such, then publishing it could be considered a violation of the Jorgensen Act of 2022, as it encourages social disharmony.”

This caused me to bristle. “I don’t concede your second suggestion. I think the story would encourage reasoned discourse even if it were racist and elitist—which I don’t think it is. What makes you think the story is, first of all, racist?”

“What? Why, it’s obvious, Mr. Renshaw. All the immoral characters are black.” I noticed some murmurs from the crowd at that.

“Really? How do you know that?”

“They’re not black,” an angry voice shouted from the audience. “They’re Jews!”

I squinted in the direction from which the voice seemed to have come. “What makes you think so?”

The room quieted. Milliard looked perplexed as he paged quickly through the story on his tablet. “Jews?” he muttered.

The audience erupted in a babble of dissension. I wanted to get out of there and take the surface tour, to see the Armstrong Footprint and to stare up at the big blue wonder that was the Earth. I wanted to take the low-orbit shuttle to see the lunar surface sliding by, 7,000 miles of desert landscape with perfect contrast of sunlight and shadow.

“Why the zombies?” a loud-voiced man in the audience demanded. “Why zombies on Mars? And what about the shape of the Martians themselves? They’re described as walking cucumbers, for Christ’s sake!”

This raised the volume and tempo of the discussions at the tables. It was a cacophony. Rozhenko, Milliard, and Hartwell were heavily engrossed in a three-way argument that was being piped through the PA system, adding to the din. A man in the back of the hall shouted, “Why does Jane seduce the Martian? Why all those minutely detailed interspecies sex scenes?”

Rozhenko raised his voice. With the amplification, he was uncomfortably loud, momentarily drowning out the babble of the room. “The zombies obviously represent the entropy inherent in any complex political system, and the death of Jane at the hands of the Martians symbolizes the corruption of powerful people.”

“No,” said a woman at a table in front. “Jane’s body is used to fertilize the Martian crèche-fields. It alludes to mythological metaphors for the fertility cycle!”

Edith Hartwell, scowling, shouted back, “Then how do you account for the rape and bondage of Donald McDowell? It’s clearly anti-feminist satire.”

Regina McGill leaned over and switched off my microphone. She was smiling. “This is likely to go on for some time. Would you like to get some dinner?”

We stood together and shuffled all but unnoticed toward the doors in the back of the room. At every table in the hall, people were shouting their pet theories at each other, red-faced and sweating. Opening the doors and stepping into the corridor, I saw two Chinese State Security officers walking toward us from the main hotel lobby.

“Can you believe all that?” McGill asked.

“I wouldn’t have believed had I not seen.”

“One day, I want to write a story like…”

We halted. The Chinese officers had stopped before us. “You are Eric Renshaw,” one of them said in near-perfect English, “of Circumlocutions Science Fiction Magazine.”

It was not a question. I began sincerely to regret the invitation.

Christopher Allenby lives in North Carolina within sight of the Appalachians where he teaches college literature and composition. During the summer months, he dabbles in satire and other less insidious literary vices.

One Response to Fiction: “The Insufferable Triteness of Beings”
by Christopher Allenby