Fiction: “A Handful of Elements” by Alan Garth 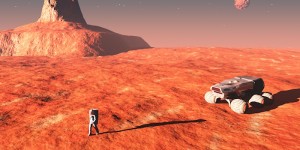 On his fourth birthday, my son told me he wanted to leave. We must move on, he said, get away from this dustball while we still can.

He was right, I knew, but he was talking about Firstfall, where for me, in spite of everything, love had bloomed.

“It’s our home, Shal. We’re happy here,” I said, not even convincing myself.

“Helen, please. You’re a former Council leader; it’s important you sign up for this. People respect your opinion.”

He sat across from me in the relaxation area of my quarters and waved his arms as he spoke, trying to persuade me with physical presence where reason had failed. I couldn’t bear the intensity of his gaze and got up to attend to the air vents, which whispered a feeble imitation of the gale outside.

Ever since planetfall, I’d lived in the main lander, rather than one of the domes in the cluster. The lander reminded me of the ship; it was a home of sorts. But Firstfall’s low temperatures and erosive dust storms ensured we were almost as confined in our planetside accommodation as we had been on the ship. It was not the life envisaged by those who set out from Mars, generations ago.

Shal wouldn’t give up. “We made a mistake,” he said. “Right star, wrong planet. Firstfall should’ve been Kepler 81b, not 81d. You know this, Helen.”

The room was a mess, I noticed: how had things got into such a state? I straightened the holos of Davven on the display wall. Such lovely eyes he had.

“If Davven were here…” I began.

After I lost Davven, I stepped down from the Council: I couldn’t fight anymore. For Shal, though, losing his father seemed to have the opposite effect.

The year on Firstfall was almost six times longer than a shipyear; my four-year-old son was already a grown man and himself now running for Council. When disembarkation began those few, long years ago, I was heavily pregnant, and should have stayed onboard the orbiting seedship. But I’d pulled rank and insisted on travelling down to the surface; I wanted my baby to be born on the planet, to be the firstborn on Firstfall. And he was, but the rigours of the landing provoked a premature delivery.

So his birthday followed close behind the anniversary of planetfall. I’d intended a celebration today to keep up the old custom, but there was little enthusiasm, particularly after the half-hearted anniversary party.

Instead, Shal asked me to put on an outdoor suit and take a ride in a dust-rover. I reminded him how much I disliked the wind and dust outside, and he was kind enough not to mention the mild agoraphobia caused by a lifetime of living in a metal cage. I relented finally when he told me he’d planned a birthday surprise—although I knew it should have been me surprising him.

We climbed out at a nearby oasis, where the tight scrub that passed for vegetation huddled round a water shaft. The wind scoured my faceplate and I concentrated on my breathing, willing it to be smooth and slow.

“Why are we here, Shal?” I asked, lowering my helmet visor to limit my line of sight.

He led me to the base of a tall clump of splint grass, part of a copse of similar species that shielded us from the weather beyond the oasis. The calm emboldened me and I risked a glance up into the pale blue fronds, whose tops were tousled by the wind, then quickly looked back down at the loose red soil hiding the grass’s roots.

“Do you recognise it?” His voice was thin and metallic over the comms link. He put his gloved hand on my shoulder and pulled me close, clumsy in the suits.

“Yes, of course,” I said. “Davven…” This was where I had scattered Davven’s ashes, over a planet-year ago, so that his remains could become part of Firstfall. We had given too many generations of dead to the infinity of space. “I don’t want to leave him, Shal. I know I have the holos, the vees, but I belong with him, on Firstfall, where he … where he died.”

We both stared at the crumbled regolith around our boots. He let go of me to scoop up the red dust, held it out to me.

“Davven’s here, Helen, in every handful, some molecules, some elements of his body.”

The preparations were complete three cycles later, and I was seated in my quarters with Shal, away from the public areas where most people would gather. The privacy helped me remember the times I’d spent with Davven on Firstfall. His multiple faces looked on from the display wall.

The engines started up and the viewscreen image of outside was blurred as the lander shook free of the planet’s surface. But the noise gradually receded to a hum and the scene clarified, showing the ground falling away.

Shal reached for my hand, but missed awkwardly as I leant over to retrieve the container of oasis dust and place it at my side.

Davven had told me Shal would be ambitious, and I could see that aspect of myself in him, in his eyes. Persuading his mother to leave Firstfall had surely helped Shal’s election campaign. He would be part of a new Council on a new world.

Firstfall’s dark blue sky faded to midnight as we rose higher in the thin atmosphere, until eventually, with the sun behind us, the stars came out to crown the planet’s horizon. The brightest star, growing to fill the screen as we ascended, was the Hypophysis. The ship had carried generations of voyagers across the void to Firstfall, and had one more step to take.

This time, Shal found my hand.

I said, “We really must celebrate your birthday, next time around.”

His gaze softened for a moment. “When will that be?” he said.

Alan Garth has published stories in several outlets, including AE (where he is twice a an international winner of the annual AE Micro contest), LabLit and Writing Magazine. He is currently a biosciences researcher in Cambridge, England, but plans to give up the lab in 2015 to spend more time with his word processor. 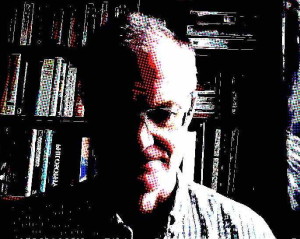