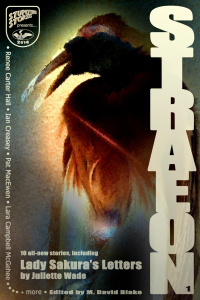 From the creator of the acclaimed Campbellian Anthology series comes STRAEON: a new quarterly exploration of stories that are longer, more complex, more mature, and more challenging than the norm. If you’re looking for space unicorns, sexy vampires, or short comedies that end in bad puns, you won’t find that here.

But if conventional genre stories don’t quite fit you—if you aren’t comfortable with the genre you’ve been wearing, or have grown too comfortable with the way it hangs upon your frame—if you sometimes wonder why you never see stories that speak to who you are, and are looking for fiction that is new, different, and not entirely safe…

Maybe you should try on STRAEON.

More than a year in the making, STRAEON #1: Malady Fare, features:

Now available for the Amazon Kindle and Kindle Reader apps at these links: