Fiction: “Copy That” by Holly Schofield 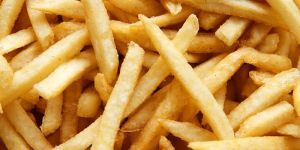 “More salt, would ya,” Colin instructed the restaurant 3-D food fabber, chucked his French fries in its tableside hopper. It whirred, then lit up with a thank you.

“There’s a salt shaker right on the table.” Miranda pursed her lips.

“You could have added salt yourself.” She waved her hand at the tiny plastic shaker before picking up her BLT sandwich.

“I thought that was, you know, just decorative,” Colin said, watching his fries reassemble themselves layer by layer through the small, greasy, viewing window of the fabber. “Besides, that wouldn’t get salt all the way through each fry. Like, inside of them?” Stupid fabber. It should have got it right the first time.

Suddenly he wished he’d splurged for somewhere fancier than this Print & Go diner, like the Alto Heaven Eatery down the street. They had real human waiters who scraped your plate off for you if you needed your dinner refabbed. If they’d eaten there, Miranda might be giving him one of those crooked smiles of hers right now instead of just watching the restaurant window gradually opaque as the setting sun struck it.

This was their third date and so far she’d only smiled a little. He wanted so badly to make her laugh.

The fabber beeped and he retrieved his plate of fries from the delivery tray before it fully extended.

“How was work today?” Miranda raised her cute little eyebrows as she bit through the blurred P&G logo on her sandwich into the precise and even layers of brown, green, and red. She had asked this question on their other two dates and he was never sure why.

“Some guy wanted original wiper blades for his ‘14 Chevy-Dai.” Colin chuckled at the memory, juggling a fry between his hands. “Ouch, now they’re too hot. Prickin’ restaurant.” He contemplated running his plate through the fabber again at a cooler setting but settled for blowing on each one instead. “I said he should wait a month until the windshields with the new 4D responsive coating are available. Who needs wipers when the windshield turns water-repellent in the rain?” A wink seemed too much so he delivered the punch line deadpan: “I told him he should take his old wiper blades and stash them with his buggy whip.”

“Huh? Oh, you mean, they’re outmoded now. I get it.” Miranda’s smile was brief. She put down her sandwich. “Colin, have you ever thought of trying for a different job, one that isn’t just—oh, never mind.” She laid a hand on his, and his heart thudded.

“Isn’t just what?” He could have sat there for hours, just enjoying the touch of her fingers.

“Never mind, sweetie. Change of topic—I went to see Grandma today.” Miranda bit her lip. “I need to talk about it, I think.”

Her grandfather’s death two weeks ago had hit her hard, especially since the old guy had died of liver failure just days before Federal template approval for internal organs had come through. Miranda hadn’t laughed since. Colin swallowed and groped for the right words. “Has your Grandma settled in at the retirement home?”

Miranda nodded, picked up her sandwich again, but didn’t take a bite. “She finally unpacked her stuff, including a ton of photo albums. She showed me a picture of Grandpa in a suit and tie for one of their Saturday night dates. He used to give her wild daisies wrapped up in a sheet of newspaper. Isn’t that the sweetest thing?”

“Yeah, copy that. Your Gramps had style. And your Grandma could keep the newspaper to remember the day’s events by.” That was one of the functions of newspapers back then, Colin was pretty sure.

Miranda beamed and ordered a coffee refill—apparently he was on a roll.

“Too bad your Grandpa didn’t have gene-modded flowers back then, all those crazy colors and shapes. And, hey, a home printer—he could have made customized wrapping paper. They had 2-D printers back in the ‘60’s, didn’t they?”

Miranda’s face fell. Wrong thing to say. Crap. He reached out a hand towards her but she drew back.

“You just don’t get it, do you? Not everything has to be fresh-printed.” She poked a finger at his head. “Is there a real you inside there or is that fabbed?” She grabbed up her purse. The beep as the screen presented the bill to Colin was drowned out by the restaurant door closing behind her.

The hairdresser’s door chimed as Colin entered. Acrid chemicals hurt his throat. The mirrored room seemed larger than it was, ping-ponging the reflections of the five stations into infinity. The five customers, their hair wet and messy, looked up from their chairs. Two skinny male hairdressers glanced over, then resumed their work. Miranda, in a pale blue form-fitting tunic, stood by the farthest chair, brushing something purplish onto the hair of a large woman.

Colin, using the courage he’d found after three sleepless nights, walked the gauntlet towards her, keeping one hand behind his back.

“Can you take a break?” The eyes of the watching women tickled the back of his neck and he fiddled with today’s earring, an exact miniature of his favorite reality star in last night’s costume.

“Prestige? Colin, you think I’m a hairdresser because of prestige?” Miranda shook her head, still plastering the vile-smelling goo on the woman’s head.

“You’ve got a great job, one that requires a person to do it. Like me with my automotive supply advisor position.” He brushed his knuckles across the Vehicle Hands logo on his uniform shirt.

He’d put his foot in it once again. Damn. But he’d come this far; he might as well finish it.

“Here. For you.” He drew out the flowers. The fat lady craned her neck up and clapped her hands, her long nails—fabbed like dragon talons—clacking together. Behind him, several women chuckled and said things he didn’t listen to. Miranda froze and the paint from her brush dripped on the floor.

He thrust the paper cone at her. “I got the newspaper in an antique store,” he said, the words spilling out of him. “Nineteen sixty-seven, that’s when your grandparents were first dating, right? And it’s a summer date, June 23rd, that’s about when daisies bloom, isn’t it?” He paused to draw in a breath. The yellowing scrap of newspaper had cost him a week’s pay when he could have fabbed it for pennies, but that didn’t matter. The light in Miranda’s eyes—that mattered.

He kept his eyes on Miranda. “Yeah, these ones are all yellow. I couldn’t find any daisies anywhere. No template or anything.” He sounded stupid, to his own ears, but the women all nodded and murmured among themselves. “Even the crab grass is disappearing,” one woman said, “Now that sidewalk slabs are fabbed to fit so tightly”.

“Then I thought of the zoo. The animals have those open fields they roam on, so I climbed a stone wall into the Africa zone—”

“You went into a lion cage for me?” Miranda interrupted him. Her mouth was all screwed up. What did that mean?

“You picked dandelions!” exclaimed the grey-haired lady one chair over, her curlers bobbing in her enthusiasm. “I haven’t seen one in years!”

“Yeah, sure, that’s what they are.” He laid the limp bundle on Miranda’s hairdressing stand. The whole thing seemed silly now.

“Colin! Like Grandpa used to do?” Miranda’s eyes filled with tears.

“I’m sorry. I didn’t mean—” Colin broke off when Miranda stepped closer and took his hand.

Her mouth twisted into a smile. “Dandelions! From the lions!” Her laughter, when it came, was rich and sweet and seemed to bounce endlessly back and forth between the mirrors that surrounded them. 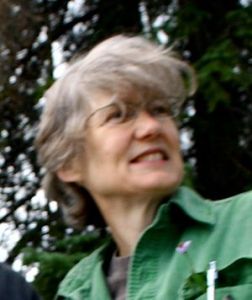 HOLLY SCHOFIELD’s work has appeared in many publications including Lightspeed, Crossed Genres, and Tesseracts. She travels through time at the rate of one second per second, oscillating between the alternate realities of a prairie farmhouse and her writing cabin on the west coast. For more of her work, see http://hollyschofield.wordpress.com/

3 Responses to Fiction: “Copy That” by Holly Schofield