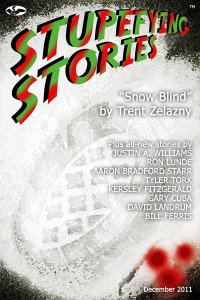 Therefore, this is your LAST CHANCE to buy Stupefying Stories 1.3 (a.k.a., the December 2011 issue) at the special End-Of-Contract-Life price of $0.99! Because as of midnight Central Time on December 31, 2014, this one goes out of print, never to be re-released again!

This book marks the first appearance in our pages of Gary Cuba, Tyler Tork, David Landrum, Bill Ferris, and the author of our cover story, Trent Zelazny. By this point our vision of a publication that transcended genre boundaries was in full swing, with stories such as “The Cowrie” and “Snow Blind” that left SF/F fans scratching their heads and asking, “Where are the rockets, robots, and ray-guns?”

This book also contains the last Christmas-themed stories we’ll ever run. That’s a promise. I like “Secret Santa,” “Seven Minutes to Bangor,” and “The Consolidated Brotherhood of Truly Bearded Santas,” but these stories opened the floodgates to a flow of truly awful “Christmas horror” submissions.

Unfortunately, this book also marks the beginning of the breakdown of our behind-the-scenes editorial processes. In three months we’d gone from a steady but manageable stream of new submissions to what we came to call The Great Submissions Blizzard of 2011. By the time it was all over on New Year’s Day we’d received more than 500 new submissions, and our slow-but-thoughtful collective decision-making system was buckling under the strain.