On the other side of the world, the hacker Firestarter knew only as Exorcist laughed. They’d routed the VoIP connection through two anonymising proxies, which made the conversation annoyingly laggy. When it became clear Exorcist wasn’t going to say anything else, Firestarter spoke again.

“Come on, Exorcist, this is big. Real big. This is some serious stuff I’m into here.”

“Remind me, Firestarter. Which of your crazy conspiracy theories is this? Is it the faked 9/11 attacks or have you found the Twitter accounts of the Area 51 aliens?”

“No, Exorcist, it’s Panopticon, I’ve finally got into the Panopticon system. You know this. I’ve been working on it for, like, years. I tell you, the Pentagon was a breeze in comparison. Whatever this thing is, it’s a thousand times more secure than anything else I’ve penetrated.”

“I don’t know what it is, do I? That’s what secret means, dude. You think I’m paranoid; you should see the security on this baby. Even the firewalls have firewalls.”

“OK, so poke around and see what you find.” Exorcist at least sounded interested now.

“I’m about to,” said Firestarter. “But listen. First, I’m gonna share the video stream. Grab it, yeah? Who knows what’ll happen when I go in there.”

Exorcist laughed again. “Right. The black ops are going to burst in through your door with their laser sights trained on you. You’re hilarious, Firestarter. You’ve seen way too many movies.”

“OK, OK, I got it. I see what you see. Front-end screen to Panopticon. Pretty rotating logo. Menu.”

Firestarter ignored him. “OK, Select a target. What do you think?”

Firestarter hit Enter. The screen paused for a moment, then filled with names, ordered alphabetically, eight columns of them. He browsed through ten pages. He was still on the Aaronovitches.

“Yeah, right. Like I’m going to let you see my real name.”

“OK, try your hacker handle then. Maybe the Man knows all about you and who you really are.”

“Right, of course he does.”

Still, he couldn’t help wondering what it would turn up. He typed in Firestarter.

The screen went blank for a moment, then five names appeared. The words Possible matches flashed underneath. His own name, his real name, was third on the list.

Not caring that Exorcist would be able to see his real identity now, he clicked on his name.

The screen went black, then an image appeared.

For a moment Firestarter was confused. On his monitor he could see an image of a computer monitor. On that screen, smaller, another monitor. Then another. It was an infinite series of screens, tunnelling off to a distant vanishing point.

“What is that, Exorcist?”

It took him two, three seconds to grasp what he was actually seeing.

Firestarter glanced around his room. When he looked back at the screen, he saw, for the briefest moment, the video lagging, his own wall, his own bookshelves. The bookshelves he had just looked at.

“It is,” he heard Exorcist say. “It really is. It’s seeing what you see. What every one sees. Panopticon. They must have, like, chips in all of us, streaming video direct from our optic nerves or something. Jesus.”

“But … that means they’ll have been watching me all along,” said Firestarter. “I mean, they’ll know I’m into them.”

Firestarter was about to kill his router, shut down his computer, when the door behind him burst open.

He froze as the red laser sights lit up on his chest. 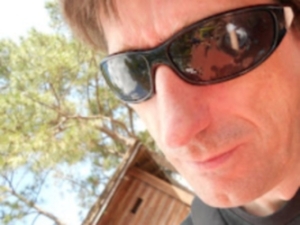