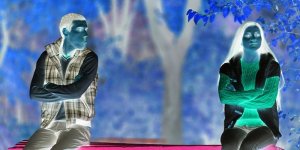 Loki crashed back into reality, gasping and reeling. He flailed with his arms until he realized that he was no longer falling. The bitterness of his last host’s fear lingered on his tongue. Her mortal flesh had been burned and torn apart, with him trapped and powerless within. Loki swallowed hard.

This new host was calm, placid. Loki let his panic dissolve into his new environment.

He sat on a park bench. He wasn’t quite sure when yet, but it didn’t look like he was about to die painfully. Warm sunlight filtered down through the tree branches. A cool breeze blew in from the south. Loki took a deeper look into this mind. Yes, Main Street ran north to south.

His name was Randall now. He looked down the front of his striped, button-down shirt. A dark red handkerchief peeked out of the breast pocket.

“This one suits you, dear.”

Randall looked to his left at the elderly woman sitting at the other end of the bench. She smiled at him from beneath a frilly hat with a lace bow, her gloved hands folded across a flowery handbag. The cloying scent of age wafted his way, cloaked in a heavy layer of perfume. Rosewater? Randall wrinkled his nose.

“Don’t be like that,” the old woman tutted. “A gentleman is always polite to a lady.”

“And you and I are neither.” Randall glared at the woman. “You’re a leg-humping cheater. Being an old bitch suits you, Coyote.”

The old woman looked shocked, waving a hand at her face. “Such language! And from a deity of your breeding?” Her indignance collapsed into a smile. “I did the same thing with Hermes last week and he didn’t complain. I just used a shortcut or two. That sort of thing.”

“Well, not much chance of that here.”

They sat in silence for a moment. He closed Randall’s eyes and leaned back, letting the sun soak into his skin.

“So, would you care for another game?” The old woman said.

“Another?” Loki flashed the nastiest grin he could manage with Randall’s false teeth. “You cheated and admitted it. You have to trap me in a mortal’s death fair and square. And no brain-dead coma patients in burning hospitals, either.”

“That was only the once,” the old woman objected.

“Conscious, capable mortals only.” He paused. “Or are you saying you’d like to concede the last match?”

“Well, let’s get on with it then. I think Randall here has a serious case of the hemorrhoids.” He shifted uncomfortably and sat up. “Now, I believe it is my move.”

The old woman grinned and the quiet street twisted into a blur. Loki felt himself slip backwards, falling end-over-end until he slammed into a new body.

He staggered, stepping backwards into empty space. His arms spun in comic circles as he teetered and finally went over. He felt a moment of panic, and then his sandal slapped onto the next step down.

He was on a staircase in an alley between two terracotta buildings. A young, dark-haired man wearing what looked like a white bed sheet stood beside him.

“I said it was my move!” Loki shouted. He looked down and noticed the curves of this new host’s body. Loki thought of himself as male deity, but this host had her own ideas. It was just easier to go with the flow.

She turned around and looked up at the smoking mountain. “And we said no Vesuvius!” She spun and gave the young man a push, as though he were the cause of all the trouble. “Cheater!”

“Livia!” The young man fell onto the next step and started shouting. It was all Greek to Loki. Latin, actually. With a heavy Pompeiian accent.

“Pigballs!” Livia shouted. She focused her thoughts, trying to sift through the mind of this girl, to at least draw out the language. But the mortal was young and too scared to be of much use.

Livia darted down the steps, away from the smoking volcano. At least she had a map of the city in her head. Livia dodged right at the next corner and then took a hard left on the main plaza, running flat-out while people crowded out onto the square, talking excitedly and pointing upwards.

Vesuvius wasn’t fair. Finding a way to keep your host alive here was almost impossible. It was also the sort of place a semi-corporeal being had a lot of trouble getting out of. Vesuvius was a trap, a depression in space-time, full of sentient beings faced with doom, advanced enough to know their fate but not enough to save themselves. This was a place where causality ended.

But Loki wasn’t going to let that drooling mutt get the satisfaction of another kill, even if it wouldn’t count. Besides, he didn’t feel like being roasted alive in an avalanche of molten rock.

Every rumble and crash from the volcano made Livia’s mortal sensibilities wobble. It was all Loki could do to hold it together and try to focus on the four-dimensional landscape outside of the girl. There were barriers everywhere. But Loki could feel the cracks. They were there.

Livia stopped beside a marble column and bent over on her knees, catching her breath. She glanced toward the volcano and saw the cloud of burning ash roll down the hill like black doom. If this feeble mind could ever be turned to escape, now was the moment.

She closed her eyes and pushed for a gap, the tiniest of ways through. Threads of causality tickled at Loki’s mind. Loki grasped at a thin stream, an echo of something from a distant future, tasting of regret and rash decisions. Loki took hold of it.

Livia’s body became an abstraction. Loki could still feel her chest rising and falling, the pressure of her hands on her thighs, the hot wind on her body. He pulled at the thread. The way through the gap was narrow and he needed to move slowly, never disturbing the aether to either side, or Coyote would see him and collapse the gap. Loki wasn’t out yet.

She could feel the heat rising, feel the sweat breaking out on Livia’s skin as the fiery cloud bore down on her. Screaming voices broke through the thickening in her ears, fading as Loki pulled slowly, steadily away from Livia’s body. Not quite far enough. Loki could feel the girl’s imminent death, just seconds away. He ignored it and pulled hard.

Loki spun out into the continuum, the entirety of time and space spread out around him, the thread of causality taut in his hands. Free of the confines of a mortal mind, he could see his opponent’s sharp-edged form loping impatiently over the Pompeiian depression, ears perked. Loki just barely kept himself from giggling as he looped the thread of space-time around the dog’s throat. He snapped it tight, concentrating, making sure that he didn’t lose control and let Coyote send them both careening down divergent timelines. He held firm as Coyote clawed at the thread, at Loki’s hands. Loki gave a final, snapping tug and felt himself collapse back into his celestial form.

Loki leapt to his feet and roared. “Victory is mine, you vile dog!”

The creature sitting on the rock beside him looked up at Loki. It had the head of a dog, but the body was largely that of a man, albeit with thick coat of gray fur and dog’s claws at the end of its fingers.

“Were you trying to kill me in the aether, Loki?” Coyote growled, pawing at his neck. “That’s low, even for you.”

“That really is a filthy mouth you have there.”

Loki stared out at a vast cave. From their vantage point high on the cave wall, they could see the entire valley spread out below them, shadowy and menacing. The roof of the cave was mostly lost to the dark, but for the few miles-long stalactites that pierced the blackness like arrows poised to strike the twisted, rocky canyon below.

“I’ve been a little grumpy lately,” Loki said, with a shrug.

Coyote had been panting slightly, but he closed his muzzle and perked up his ears, cocking his head to look at Loki.

“The guys want me to get into the whole Ragnarök, end-of-the-world thing,” Loki went on. “After what they’ve done to me for the last few centuries! I won’t even go into the gory details, but it involves intestines and acid on my face. Typical god stuff, but it really pisses you off.”

“I hate stuff like that. Especially when someone does it to me.”

“Look.” Loki scratched his ear. “About the whole strangling-you-with-space-time thing…”

“Don’t worry about it. I had it coming. Really.”

“I just get a little riled up sometimes, is all.”

Coyote grinned his wolfish grin. “We should play again. I don’t like that you’re up thirty virgins on me.”

Loki nodded. “But seriously this time. My move.” 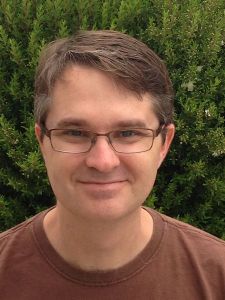 ALEX GORMAN lives in sunny San Diego with his wife and two children, who he teaches to never cheat and only manipulate space-time when the game really calls for it. He has had work published in Daily Science Fiction, Penumbra and Big Pulp. You can find out more about his adventures on his blog, nonsensicles.com.