Fiction: “Echoes in the Dark” by Gunnar De Winter 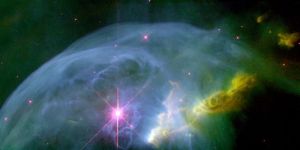 “You see? By carefully tracking the field, we’ll be able to find mass, even types otherwise undetectable.”

A whisper of a voice that shouldn’t exist. An impossibility manifests. Small, yet pervasive. A tiny pebble disturbing the smooth surface of our cosmos. All are aware. The web trembles, its strands, forged in fire and expanded into infinity, vibrate softly, singing a song none has heard before.

Curiosity awakens. Movement is initiated, for once with purpose.

“Super. When can we begin expanding the grid?”

“Depends on how well it performs using these low-earth orbit satellites. If the measurements are in the same order of magnitude as earlier work suggests, then we can scale-up in a matter of days, depending on the location of the q-rift-sats.”

The spark remains brightly lit. Chances of coincidence decrease. Even the old ones reconfigure themselves. For the first time in eons they stir, ancient beings shrugging off the weight time has thrust upon them. Something new has drawn their attention.

“See for yourself. These large masses of dark matter—at least that’s what we think it is—move. And they’re heading this way.”

The anomaly expands. The strands shudder fiercely with incomprehension. Eagerness and anxiety combine in all that feel. The universe remains the same and changes simultaneously. A window into the beyond has opened. A howl from past eternity, a signal from outside of infinity.

All heed the call.

“So, they pass large celestial bodies, seemingly without being bothered by gravitational effects. Any ideas, people?”

“Well—and I know this is going to sound absolutely insane—but the pattern of movement we can discern looks like it might be purposeful.”

“So these dark matter clouds, or whatever they are, are heading this way because they decided to?”

“We don’t know if it really is dark matter. But essentially, yes.”

Motion is maintained. Wave after wave leaves, driven by singular purpose. To behold what lies further than all things. The vibration is a song that fills our being, speaking of existential blasphemy, whispering of light where there is only darkness.

“Let’s say we accept your ‘intentional’ hypothesis. How can you possibly explain it? Dark matter isn’t supposed to form atoms and molecules and so on.”

“The majority isn’t supposed to. A small proportion might. And keep in mind, we don’t really know anything about it. Hence ‘dark.’”

“Okay, okay. Spare me the nitpicking. Either way, dark life, or something like that, shouldn’t exist… Don’t shrug, but find an answer.”

“Maybe we should increase the energy input, which would allow more detailed readings of the field?”

Growing light. Something beckons. Blinding brightness guides us towards a tear in reality’s fabric. Unwavering desire grabs hold and insatiable curiosity overrides all other purpose. By now, all have responded, incessantly flocking towards the incongruity, seeking escape from the darkness.

Fleeing from a prison we were unaware of, until the light showed it to us.

“What if, and this is highly speculative, dark energy is what allows these… things to exist? What if dark energy allows the formation of dark atoms, a bit analogous to electromagnetism in our… side of the universe? The next step would be dark molecules. And then…”

“I’m merely saying that we shouldn’t discard the possibility yet. Maybe we should admit that there’s a lot we don’t know yet about these… new realms… we’re exploring.”

As we move, so does the universe. An unknown dance begins. Existence itself spins on its many axes, guided by the song of the endless strands that bind it. Both light and darkness see the shadows of the dancing cosmos. Its twists and turns turn and twist realities.

“What exactly are you saying?”

“Dark or not, whatever approaches us is matter. In other words, it exerts gravity on its surroundings. And with the vast quantity on the move, gravitational waves are wreaking havoc on nearby celestial bodies.”

“Wait a minute. That’s what’s been causing the anomalies we’ve been measuring… That’s bad. Very bad. Turn it off. Turn everything off!”

Dark meets light. The momentous weight of this impossible meeting crushes us together. The strands close, reining in the two attached universes. Making us one. Hand in hand, we merge and reach for the hole in reality.

And close it behind us.

GUNNAR DE WINTER is a biologist who studies the evolution of behavior and occasionally embarks on fictional fieldwork.

2 Responses to Fiction: “Echoes in the Dark” by Gunnar De Winter