Fiction: “On the Conservation of Historical Momentum”
by Bruce Bethke 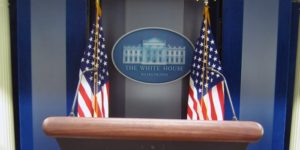 Political science was not his field, but Eugene McCarthy Bennett, PhD, developed a new political theory as he sat on the cat-clawed sofa in his living room, drinking lukewarm beer and watching the six o’clock news. “The government has a carefully hoarded stock of old G.I. mail,” he told Stallone, his orange tabby. “Whenever they plan to launch a really serious assault on sanity, they first distract us by releasing one of those old letters.” In a flash of sudden movement, he grabbed the cat by the neck and forced it to look at the TV. “See?”

David Price-Waterhouse’s video simulacrum was onscreen, delivering the news of the latest troop commitments with the same confident, sober, and serious expression it used when talking about airliner crashes, terrorist attacks, or for that matter, Senior-size Pampers.

Stallone’s eyes narrowed, in the expression of contemptuous compliance cats use so often when dealing with humans.

“The President,” Price-Waterhouse intoned, “while still refusing to divulge his whereabouts following last Sunday’s coup attempt by CBN reporters, issued this statement.” The TV cut to a medium shot of President Franecki standing behind the presidential lectern, his hands tightly clenched, a nondescript blue curtain hanging limply in the background. The President appeared haggard and unkempt—as did everyone, compared to Price-Waterhouse—but he seemed oddly cheerful for a man whose sense of personal honor was currently killing a hundred American soldiers per day.

“We have a legal, moral, and sacred commitment,” Franecki thundered, the lectern’s audio enhancers adding a Vaderesque rumble to his voice, “to support Presidente Misconcepcion’s government in every way we can! To those naysayers who claim his regime is a corrupt dictatorship that deserves to fall, I say, balderdash! To those faint hearts who say it’s a teetering wreck that wouldn’t last a day without our troops, I say, bull pizzle!

“To those vermin, those filthy Red sympathizers who say this noble mission, this holy war, is a bottomless sinkhole, and that Mexico is just another Costa Rica, I say—”

Franecki slammed a fist down on the large red button before him and the front panel of the lectern exploded in a barrage of machine-gun fire and blasting antipersonnel mines. Stallone let out a terrified hiss, squirmed free of Eugene’s hands, and ran off to hide in the kitchen.

“On a lighter note,” Price-Waterhouse continued seamlessly, “the last Postmaster-General of the United States, Everett Foge, came out of retirement today to hand-deliver a letter to Dr. Eugene McCarthy Bennett, Brin Professor of Theoretical Physics at California Tech.”

“See?” Eugene crowed at Stallone. “They needed a fluff piece for balance!”

“The letter,” Price-Waterhouse said, with a smug and condescending smile, “was mailed in 1944 by Doctor Bennett’s grandfather, Colonel Ulysses Grant Bennett. In a typical example of the incompetence of the old neo-socialist Federal Postal Service, the letter lay undiscovered in a filing cabinet for more than sixty years. It was found recently by workmen demolishing the Central Post Office Building in Newark, New Jersey.”

The camera pushed in for a close-up of Eugene’s face as he tore open the envelope and began to read. “It’s to my grandmother,” the Eugene on TV said at last. “It’s personal.”

“Thirty-eight and still single,” Price-Waterhouse continued, “Doctor Bennett is perhaps the last in a line of Bennetts whose service to the country dates back to the American Revolution.”

“Now you sound like my mother,” Eugene taunted the TV. “Come on, I’m not embarrassed enough. Why don’t you drag her into this?”

“Doctor Bennett’s mother,” Price-Waterhouse obligingly added, “Dorothea Epstein-Bennett Sanchez, who is currently in jail awaiting charges stemming from last month’s incident in which thirty Senior Panthers chained themselves to the White House gates, named him after 1960’s peace activist Senator Eugene McCarthy. By curious coincidence, today is the 90th anniversary of the birth of Senator McCarthy, and in his home state of Minnesota the traditional effigy-burning—”

The television went black. Eugene blew across the lens of the remote in his hand as if it were the smoking barrel of a gun. “Gotcha, varmint,” he said with what he believed to be a flinty-eyed smile. Then he dropped the remote and reached over the arm of the couch, groping for the beer can on the end table.

He came up with the letter again.

Turning it over in his hands, he examined it closely. The envelope was smudged, yellowed, and crisp with age. A thin brown stain ran along one edge, probably a legacy from some long-forgotten clerical worker’s spilled coffee. Over the years the address had faded to a pale blue ghost, but the name was still readable: Mrs. U. G. Bennett.

“Even in his last letter, he couldn’t call her by her own name,” Eugene whispered. He shook the envelope lightly; two sheets fell out. One was open, and fluttered into his lap like a dying butterfly. The other was still sealed with a blob of dark red wax. Eugene picked up the open sheet and read the spidery blue script:

I cannot tell you just where I am, of course, but I can tell you that things are going quite well and that I have every hope of being home in time for the christening. I still favor Dwight David if it is a boy, and the General has already agreed to be his godfather, so you had better not let me down, ha ha!

It will be a marvelous world our son will grow up in. One without war; one without want. Roosevelt will win re-election, of that I am sure, and together he and “Uncle Joe” Stalin will forge a peace that will make my profession thankfully obsolete. It’s thoughts like these that help me to carry on, day after day. Out of this horror we will build a future in which no mother’s son ever has to die in battle again. And yet…

And yet, darling, I’ve had this most dreadful uneasiness as of late. What if it all goes wrong? What if Roosevelt doesn’t survive? What if the Russians are not to be trusted? Last night it was almost a vision: a sea of fire, each flame a tiny, bitter little war ignited by crazed zealots and fanned by profit-hungry military industrialists, extending on into the future like an infinity of mirrors.

That is the second sheet, Effie. I have always trusted your good sense. Read the details of my vision; tell me what you think. Are these the reasonable concerns of a serious man, or am I just exhausted? I am trying to gather the courage to discuss this with General Eisenhower, but will await your judgement.

Well, I must be off now. Give my love to everyone, and keep up those Esperanto lessons. We’ll need them in Moscow!

Eugene carefully folded the sheet and slipped it back into the envelope. Then he picked up the second sheet, turned it over, and considered the ornate, gothic B impressed into the sealing wax. “A sealed letter from my grandfather,” he whispered softly. He looked up. “Stallone?” The cat was nowhere to be found. “Stallone, this is it!” Dropping the letter, Eugene scooped up the phone on the end table and started frantically punching in the number for his lab.

“Hello, Larry? This is Gene. I’ve just found the perfect test case! Fire up the Tardyon Empathic Transmitter. I’ll be there in—” Eugene checked his watch, “—half an hour!” Eugene hung up, then paused a moment.

“The Tardyon Empathic Transmitter,” he whispered softly. “A one-way telegraph to the past. My life’s work, and the acronym had to come out TET. Fate plays such silly buggers…”

[A burst of light, and a cascade of white noise. An odd shimmer rolls through the air, setting the image dancing as if seen through heat waves across the desert, while causality itself is momentarily stood on end.]

“Doctor Bennett’s mother, who is currently in jail awaiting charges stemming from last month’s incident in which thirty anti-solidarity activists chained themselves to the White House gates, named him after 60’s reactionary leader Ronald Reagan. The former star of Cattle Queen of Montana, Reagan flirted briefly with politics and attained his greatest popularity in 1968, finishing a close second in the race for the California governor’s seat. Thereafter he returned to acting, and today Reagan is best known for his Academy Award-winning performance opposite his daughter Patti in the 1981 film, On Golden Pond. By a curious coincidence today is the 95th anniversary of Reagan’s birth, and in California today the Screen Actor’s Collective—”

The screen went black. Doctor Ronald Reagan Bennett, Malzberg Professor of Applied Metaphysics at CalTech, blew across the tip of the remote control as if it were a smoking gun. “Die, lackey running dog of imperialism,” he said with a flinty-eyed smile. Then he looked at the letter again.

You know my dreams for the future, as we’ve discussed them before. But last night I had a horrid nightmare vision: a postwar world in which we forgot our revolutionary democratic heritage and went back to supporting all the old European colonial powers. An ugly, brutal world, in which we became so obsessed with our philosophical differences with the Soviets that we fought a long, bitter, proxy struggle—a ‘cold’ war, as it were—

Bennett carefully folded the letter, put it back in the envelope, and turned his attention to the second, sealed page. “A sealed letter from my grandfather,” he whispered softly. He looked up. “Fonda?” The cat was nowhere to be found. “Fonda, this is it!” Dropping the letter, Bennett scooped up the phone on the end table and began frantically punching in the number for his lab. 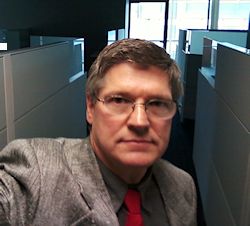 In SF/F circles, Bruce Bethke is best known either for his 1980 short story, “Cyberpunk,” or his Philip K. Dick Award-winning novel, Headcrash. In the real world, he works in supercomputer software R&D, which work, while fascinating to do, tends to cut into the time he has available to devote to fiction.

Shifting out of the third-person: “On the Conservation of Historical Momentum” is one of my “lost” stories. I wrote it back in the 1980s and saw it accepted three or four times, always by small press magazines that went out of business before publishing it or paying me—except for the last one, which did publish it, but never paid me. Thereafter I lost interest in the story, until recent events brought it to mind and sent me off on a spelunking expedition to find and exhume it again.

For a multitude of reasons, some of them very personal and deeply ironic, this seemed to me to be the right story to use today.

3 Responses to Fiction: “On the Conservation of Historical Momentum”
by Bruce Bethke