Fiction: “Ride Like the Wind”
by Ryan Neil Falcone 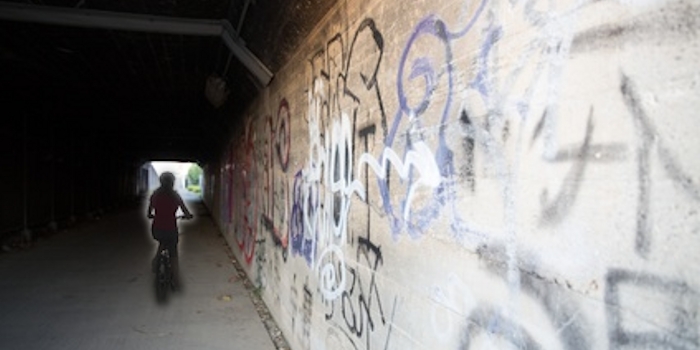 The happiest day of my life happened when I was eight years old. I can still picture it vividly, even after all these years: racing toward the playground on my bicycle while my father ran alongside me on the bike path, offering cheerful words of encouragement. The air was filled with floating dandelion fuzz and willow fluff as we rushed toward the tunnel that led toward the playground on the other side. In actuality, it was really a highway underpass, but to my eight-year-old imagination, the tunnel seemed impossibly long and spooky. Who knew what unimaginable monsters lurked in the dark?

“Ride like the wind, Ophelia,” my father laughed, “and they’ll never catch you!”

The worst day of my life came later that summer, when my parents informed us about my father’s illness. I went numb listening to them explain from across the dinner table, using confusing words more frightening than any monster I could envision.

Sensing my distress, my father did what he always did: reassured me with a confident wink, telling me that everything would be all right. And for a time, I believed him. But despite the great pains he took to conceal how sick he was from us, he wasn’t able to hide the truth for long. As summer waned, his body withered from the experimental treatment he underwent. His handsome face became gaunt and sallow, the vibrant gleam in his eye giving way to a watery, sickly yellow hue that gave away how enfeebled he’d become. It wasn’t long before he was too weak to accompany me to the playground anymore. I’d smile back at him while he waved from the driveway, not letting on how heartbreaking it was to see his shoulders droop as he wearily shuffled back toward the house without realizing that I was still watching while I pedaled off. On those days, I’d go to the playground and cry until I felt composed enough to return home without showing how distraught I really felt.

On the night the ambulance took him away, I gripped my father’s hand tightly as they loaded him inside, my grief overflowing when it pulled free from my trembling grasp. Lying in bed that night, I made a wish upon the evening star—a desperate child’s wish—and knew what I had to do.

I waited until my family had fallen asleep before quietly sneaking out of the house to retrieve my bike from the garage. I set off for the playground, teeth gritted with determination as I followed the familiar path that I’d ridden so many times before. Tears streamed down my face as I approached the tunnel.

The monsters were waiting, just as I’d expected. I could sense shadowy hands stretching toward me from the gloom as I zoomed past them on the otherwise deserted bike trail. But the worst one of all was a monster named Cancer. I could feel its hot breath upon my neck as it raced after me, its indistinct body billowing like smoke as it gave chase. Its fiery eyes blazed in the darkness of the tunnel, teeth snapping as it nipped at my wheels. Hunching over the handlebars, I pedaled as fast as I could, but this particular monster was more dangerous than the rest. My only chance to outrun it was to ride like the wind.

The sound of my ragged gasps echoed throughout the enclosed tunnel as I tried to ignore the stitch forming in my side and plunged forward as if shot from a cannon. Just when it seemed that the tunnel would never end, I emerged on the other side. Glancing over my shoulder, I let out a triumphant shout when I saw the monster’s defeated, blazing eyes receding in the distance.

My jubilation gave way to anguish when I reached the playground a few moments later.  I fell to the ground, struggling to breathe as the full weight of my father’s predicament collapsed inward upon me. Kicking the overturned bike away, I pulled my knees to my face and sobbed.

When there were no more tears left to cry, I picked up my bike and dejectedly trudged home. I wasn’t even scared about having to walk back through the tunnel, understanding for the first time in my life that monsters were the least of my concerns. A precious ember of innocence extinguished within me during that long walk home, and by the time I’d arrived, I’d begun to accept that not even wishing upon a star would help my beloved father.

Whenever I think about the summer my father died, my first recollection is invariably about that night. And I can’t help but weep for that innocent little girl bravely facing her monsters alone in the dark, desperately clinging to the belief that her father might get better if she could somehow ride fast enough to outrun his monster.

But then I close my eyes and see my father through the eyes of that eight year old girl—handsome and strong, before cancer robbed him of his vitality. I remember his smiling face awash with love as he ran alongside my bike on the happiest day of my life. I can almost feel the warmth of the sun on my face as I pedal toward the playground. The air is thick with dandelion fuzz and willow fluff, and above the din of the wind rushing past my ears, I hear him shouting words of support to his beloved daughter, encouraging her to ride like the wind. 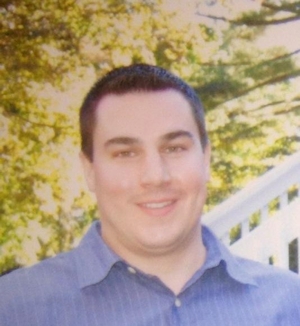 Ryan Neil Falcone is a story editor for Dark Moon Digest and an active member of Cornell University’s Irving Literary Society.  When he isn’t writing, he enjoys reading to his daughters to cultivate their love of the printed word.  His work has appeared in several prominent horror, sci-fi, and fantasy markets as well as numerous commercially available print anthologies.  His platform of work is summarized at:  www.ryanneilfalcone.com

5 Responses to Fiction: “Ride Like the Wind”
by Ryan Neil Falcone