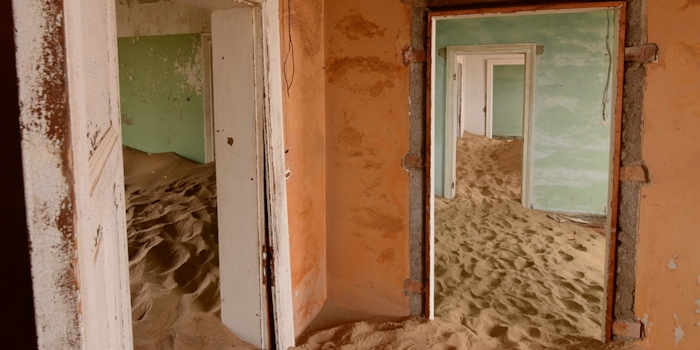 My mother was washing a rag in the sink again. Sometimes she’d forget we went to the laundrette, didn’t wash our clothes at home any more. The soap would crack our skin, made it difficult for me to play guitar. The guitar was my lifeline, the only way I was getting out of town. Some day.

“Ma, stop that,” I said, more out of habit than any sense that she’d stop. Since the accident, she, like most of the town, had been living in a world that wasn’t there any more. They saw it, maybe it was really there to them, but not the rest of us. The newspapers said the theory was we were living on slightly different, intersecting planes. No one really knew. It wasn’t every day a chemical plant containing military secrets exploded outside a backwater town.

The rag she was washing was an old Foo Fighters t-shirt, bought in the lobby at my very first concert. I can still remember the excitement, twelve years old and handing over far too much of my carefully hoarded pocket money for a shirt that smelled of the chemicals that kept it crisp. I’d pulled it on over what I was wearing, which is why when I reacted to the chemicals I only came up in a rash in a ring around my collarbone and on my upper arms. The next day was the first time my mother washed the t-shirt in the sink.

I glanced at the clock, and then out the window. It was getting dark early and a bat flittered past the window. The Inspector was due soon, but he never turned up when the clock said he should. I don’t know if that was because of him or us, though.

There was a knock on the door. He was early, like I’d summoned him. I opened the front door, although it kept jamming on the sand that filled the hallway. The problem with living at the edge of the beach was, the beach tried to come indoors. I used to clean it away when I knew he was coming, pretending everything was fine. It wasn’t fine though, or he wouldn’t come.

It looked like the same Inspector, although I could never be sure. He never seemed to remember what we’d talked about before. I suppose one Man In Black type looks much like another.

“May I come in?” he asked. He always pretended we had a choice over that. I stood aside and let him squeeze through the gap past the front door. He didn’t mention the sand.

He wandered through the downstairs rooms and I trailed behind him like a puppy. Being an Inspector, he inspected everything, and I got a feeling as always that he was noting what he saw even though he never wrote anything down.

The Inspector got halfway up the stairs before he realised— remembered?—that the top floor had been abandoned after the explosion. The windows and half the roof were gone. The rooms were full of a weird greenish fog that drifted in from outside and couldn’t find its way out again. It never found its way inside downstairs either, which is why we stayed. We could have gone to the community centre like so many others, but Ma wouldn’t go. Neither would I. It was too much like giving up.

We ended up in the kitchen, like we always did. Mother didn’t look up from wringing out the t-shirt. The Inspector greeted her but she didn’t answer. Like I said, different plane. For all I knew the house she saw wasn’t full of sand, either.

The Inspector sat at the kitchen table. I sat opposite, hauled my guitar onto my lap, and pretended to tune it.

“Do you interact much with your mother?” he asked.

I shrugged. “Sometimes. She doesn’t always see me.” This week had been better than most. We’d even managed to have a cup of coffee together.

“Have you thought about leaving town?” he asked. “It’s permitted, if you’re unaffected.”

This was new. I stared at him. “How? There haven’t been buses or trains through here since. . .” I waved my hand in the vague direction of where upstairs used to be. In town we didn’t mention the accident, not to the Inspector. Things got weird if you did, so it was better to pretend you hadn’t noticed. Keep calm and carry on.

“Learn to drive,” he suggested, and stood.

“Is that it?” I asked. The suddenness of his question and briefness of the interview fazed me. This wasn’t how it was supposed to go.

“There will still be Inspections,” he added. Like that answered anything. He saw himself out.

Learn to drive. I’d never even thought of it. What was the point, when the roads weren’t mended? Who’d teach me? How would I buy a car? Although there were plenty of cars in town, just sitting there. Most people had been at the chemical plant when it exploded.

Why would the Inspector want me to leave town?

At that moment, mother turned around and offered me my t-shirt.

“All finished, dear,” she said.

The shirt was whole and crisp, and smelled of chemicals. I took it and pulled it on over what I was wearing, and went outside to look for a car.

C.L. Holland is a British writer of fantasy and science fiction. Sometimes she writes poetry under an assumed name. She has a BA in English with Creative Writing, and MA in English, and likes to learn things for fun. She lives with her long-suffering partner, and two cats who don’t understand why they can’t share her lap with the laptop. Her website is http://clholland.weebly.com/.

One Response to Fiction: “The Inspection”
by C. L. Holland